Ah the multi-pack box; I've actually pulled one or two good ones from these and they make an affordable mix to pick from.

Victor Lustig - World's Biggest Hoaxes and Hoodwinks mini. According to the back of this card, Victor sold the Eiffel Tower for scrap metal.

Chipper Jones - I always seem to get a Chipper Jones, man this guy has been playing for quite a while.

Written by --David at 2:09 PM
I actually thought I had posted a pack of these before, but can't seem to find the post. Welp, that's a good sign to post this pack of movie tie-ins.  The difference here: ACTIVITIES!


In this first group, there are two cards on which kiddos can color!  This is only, what, about 15 years BEFORE Topps started doing Sketch cards? 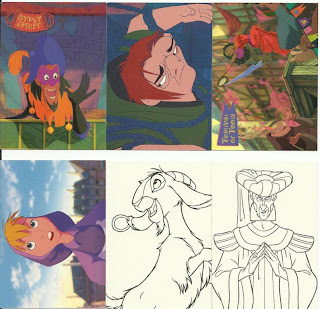 If coloring isn't your thing, how about card-stacking?  Yeap, collect all the cards and build your own tower! 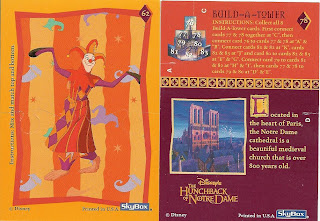 Building not your thing, either?  Well, then, how about a puppet show or some coinage?  Yeap, we have coins you can punch out or we have finger puppets you can play with.  Awesome old school interactivity! 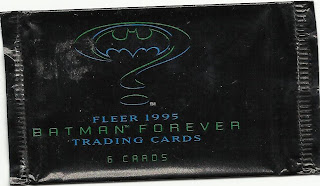 How about a couple of Jim Carrey shots, showing a varied range of emotions:

He went to the Danger Zone.... 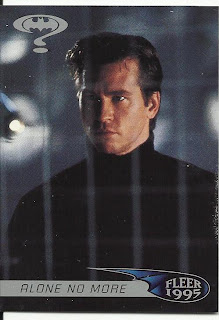 Written by --David at 2:01 PM
Upper Deck did a series of baseball cards with Looney Tunes characters, so why not parallel that with football?  Here, I busted open a couple packs of the ComicBowl IV packs: 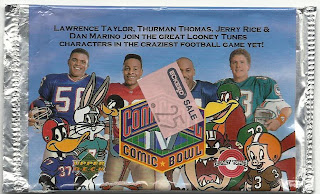 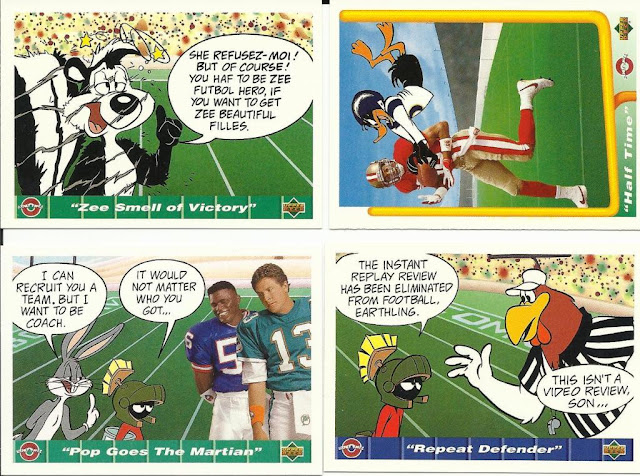 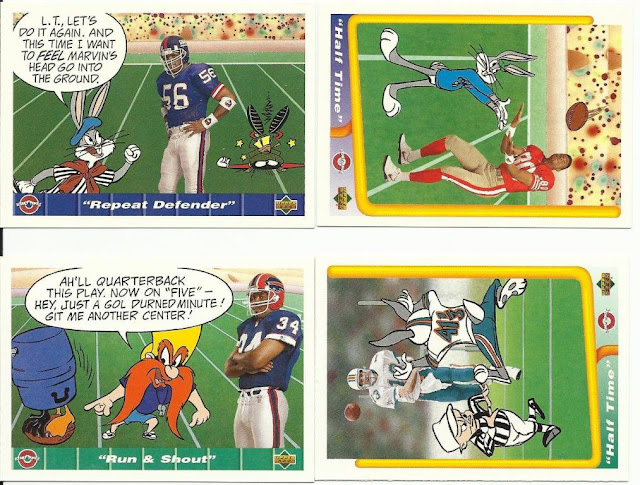 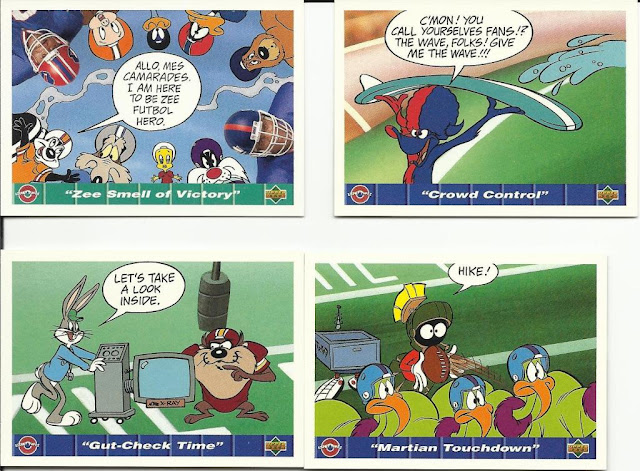 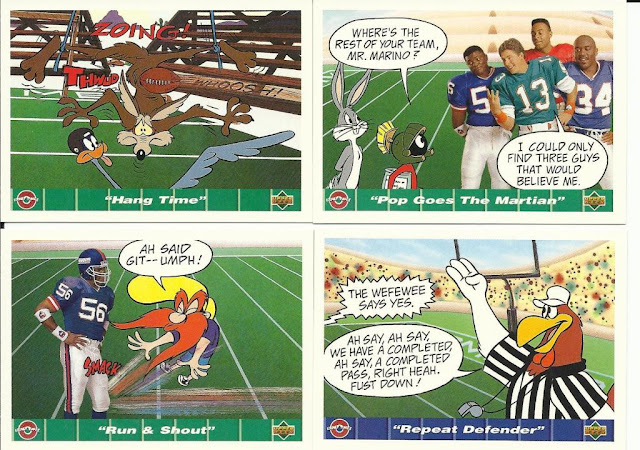 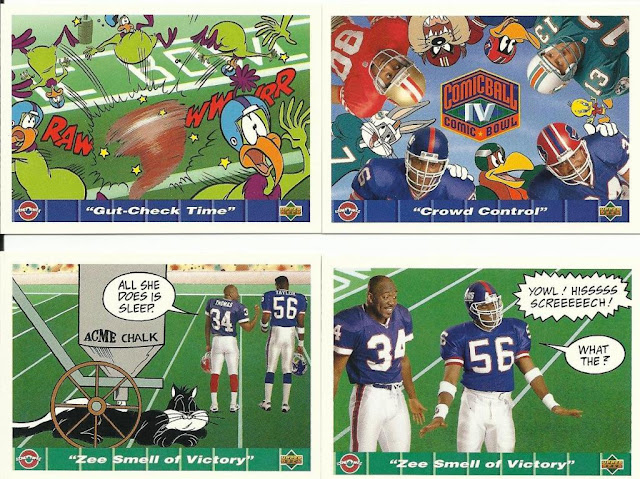 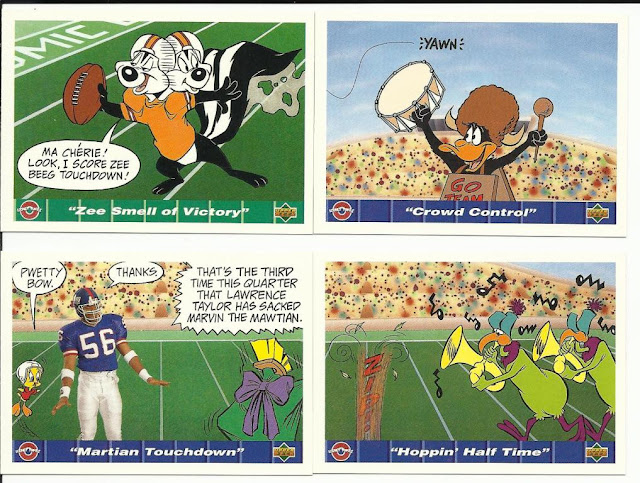 Written by --David at 1:57 PM
For as big of a computer nerd as I am, I never got into the whole Star Trek thing. So, other than seeing some actors I recognize, I don't know anything about anything going on here.  Oh, and the Sela card  (er, the 2nd Sela card) is embossed. That's actually kinda cool. 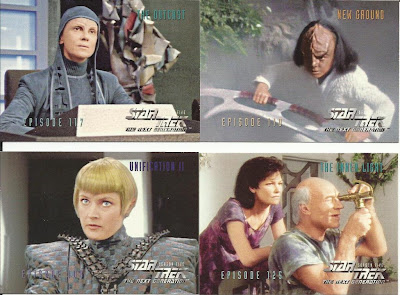 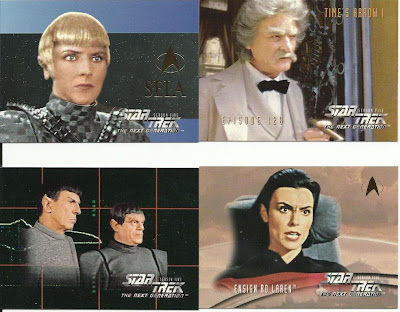 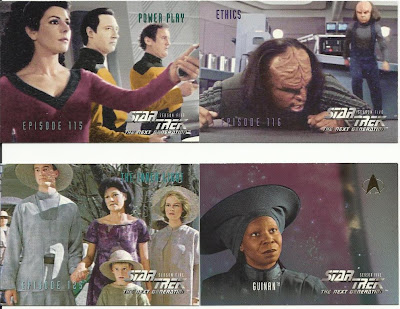 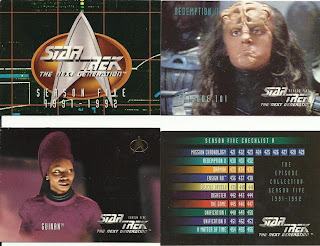 Written by --David at 1:53 PM
Another pack of these was posted previously, but since I decided to bust all my non-sport wax on MLK Day, here is another look at cards from this set: 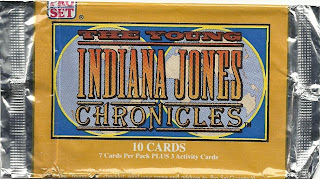 The cards below feature some cool diversions: a set os 3d glasses and a 3d card to go with them and a treasure hunter card (the large foldout) with items listed on the back to find. 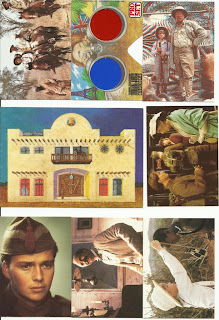 Since the fronts of the cards only showed stills, I thought I would show the backs: 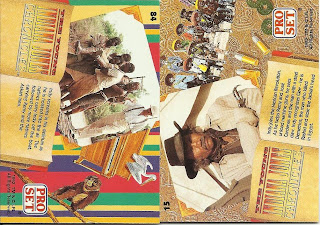 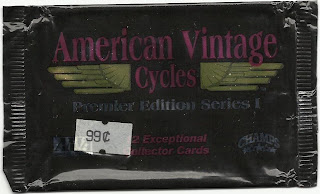 I don't know anything about motorcycles, but looking through a pack of vintage bikes brought on a nostalgia I didn't even know I had.  Very cool stuff! 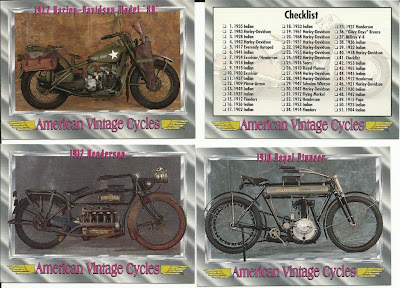 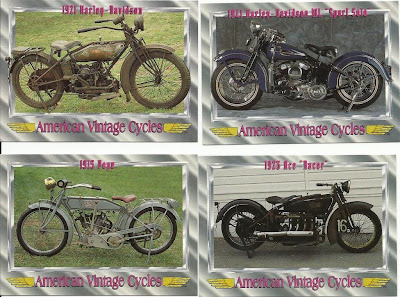 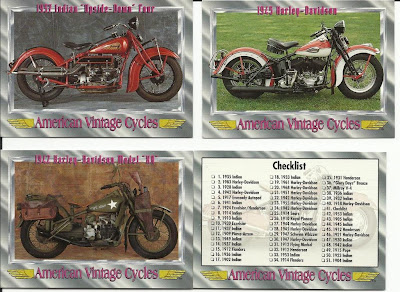 Written by --David at 1:50 PM
Because one series of TMNT cards wasn't enough... 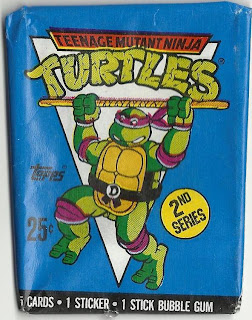 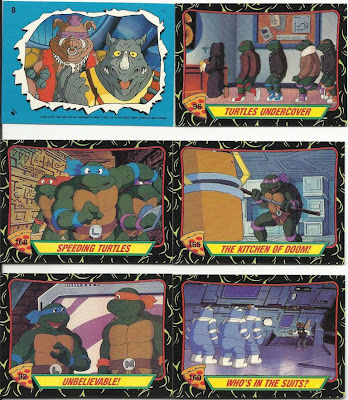 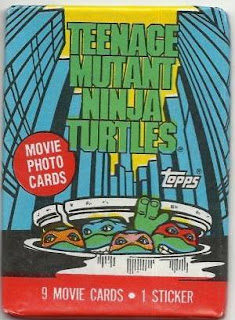 You remember these guys, right?  Yeah, the "old" TMNT movie that your parents probably saw.  Wait. No, no they would have been around to SEE it, but no one saw it.  Well, a bunch of kids, maybe.  Where was I? Well, this movie came out back in '90 or '89.  Either way, Topps was really into movie tie-ins then. 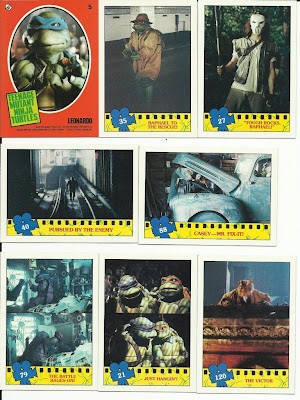 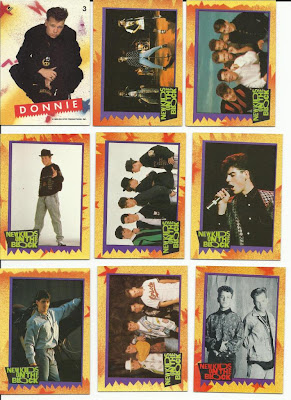 I forgot to scan the wrapper.  And, I forgot to scan the rapper.  (rimshot!) I'll be here all week. No, really. That's my schedule.  (One of the best Progressive Insurance spots ever.)  What does any of this have to do with NTKOB? Not a dang thing.
0 comments

Email ThisBlogThis!Share to TwitterShare to FacebookShare to Pinterest
Labels: 1989 Topps New Kids On The Block 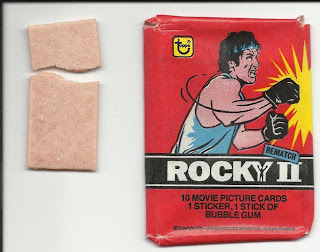 Yeap, that gum is from 1979. Want some?  My wife walked in as I was about to open this, and I showed her the raised area of the pack where the gum was.  She said, "You better not open that. It could be worth a lot of money," in her patronizingly sweet way she does when it comes to anything card-related.  I opened the pack.  She said, "Well, now you've exposed it to air. It's worthless. And cracked."  I love my wife. 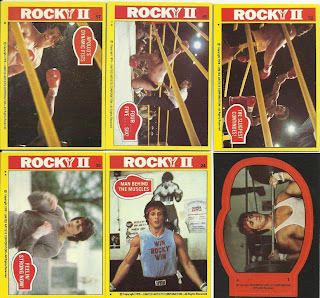 Each pack comes with a variety of cards and a glove-shaped sticker.  These are classic Topps card stock, photography, and design.  What's not to love? 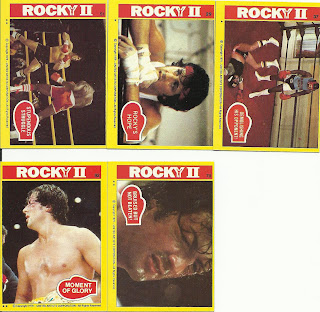 What's this?  New Thundercats trading cards based off the new Thundercats animated series?  Yes please!  I had no idea these even existed until I stopped in at Target to get my daughter a few packs of Panini Hello Kitty stickers.  $2.99 a pack?  Ouch.  I'm of the curious nature so I had to take a look.  80 card set.  Series 1 contains 68 common cards and 12 rare cards.  Each pack contains 8 cards - 7 common and 1 foil rare card.

Driller (Character Card) #1-25
First card out of the pack is a winner!  I love the updated design they gave to the Driller.  Now if only Bandai will make an action figure of him because the original LJN figure sucks...no matter how rare he is!

Jaga (Character Card) #1-17
The wise sage to King Claudus and advisor to Lion-O.

Lion-O (Character Card) #1-02
This the rare foil card inserted 1 per pack.  I like how Lion-O's eyes are foil and have a shiny appearance.

Companion (Scene Collection) #1-46 | Episode 3: "Ramlak Rising"
I don't always care for cards that just feature screen captures, but at least they added the episode the capture is from as well as some quotes from the scene.

Reunion (Scene Collection) #1-45 | Episode 1 & 2: "The Sword of Omens"
The first two episodes did a really good job setting up the story and introducing new fans to the rich Thundercats history.  I liked getting a glimpse of King Claudus and his past relationships.

(Puzzle Collection) #1-74
I can't wait to see how these puzzle cards look in a 9 pocket page.  I couldn't have been the only one that was surprised by the sexual tension between Lion-O and Cheetara early on...right?

(Puzzle Collection) #1-69
Overall I'm really impressed with these cards. They have a slick matte like finish and the corners are rounded.  They feel a lot like playing cards.  I still wish the price was at least a buck less and 3 puzzle cards was a little too much for one pack.  All in all though its a beautiful high quality set in which I plan to build.
0 comments