Written by Jafronius at 1:39 AM
Greetings!

Hope everyone's New Year celebrations were great, whether you partied till dawn, or turned in before the ball dropped.  May 2012 be just a good as 2011, or for the pessimists out there, may 2012 suck less than 2011.

Here's the last of the crawlspace packs (for now).  If I remember right, there was a bookstore in the mall that had a box of these; long after the movie was released, the packs were marked down to $.50 each, so I indulged.  Here's some Star Trek:  Insurrection cards!

These are the equivalent to the Topps Widevision cards made for the Star Wars movies.  It was a 72 card set.  Amongst the inserts are 19 Autograph cards (1:36 packs) and 7 Gold cards 1:720 packs.  Did I get an autograph?  Of course not! 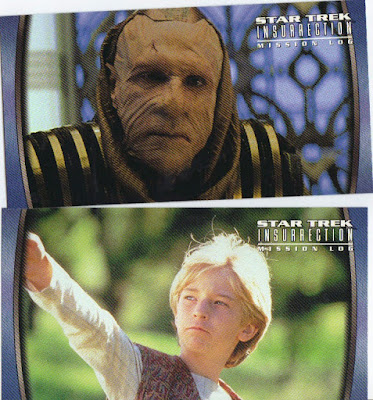 F. Murray Abraham played the baddie, pictured on the first card.  For those who haven't seen the movie, Picard's crew comes to the defense of a planet whose inhabitants are kept young-looking due to the some sort of technobabble.  The baddies want to kick the inhabitants off the planet so they can live there and be all young-looking too.  I don't blame them, seeing how ugly they look now.  Oh, the "Insurrection" in the title refers to the fact that Starfleet has ordered the Enterprise to evacuate the inhabitants, as the misguided Admiral had an agreement with the baddies.  Thus Picard leads the "insurrection."

Surprising to me, the kid in the second card has been pretty busy, according to the IMDB.  He has appeared in a bunch of TV shows as well as the Twilight movies.  See, there IS an acting life after appearing in Star Trek! 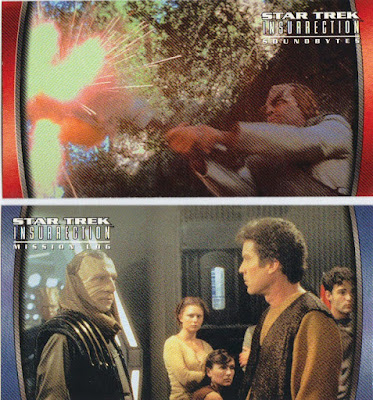 The Soundbytes cards have a line from the movie on the back, relating to the scene on the front.  Pretty boring.  The Mission Log cards are a summary of the movie itself.  The second card is a pic of Murray facing off against the guy from Hardcastle and McCormick. 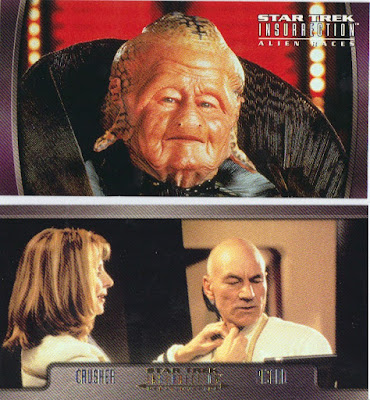 There was a subset of cards featuring the races introduced in the movie.  I don't remember where these folks popped up, probably during the fancy dinner scene.

The Relationships Insert cards were seeded 1:8 packs, so a bonus for me. 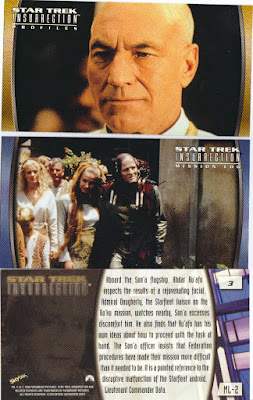 The latter cards in the set focused on the main characters.  An example of the card backs show too much empty space.  Compare this to the backs of the Soundbytes cards, where there is no image in the back and the movie quote takes up the whole back in large font.

Well, that's the pack.  Got an insert at least.  The cards, like the movie itself, were a disappointment for me.  The movie would be fine for a two-partner during the show's run, but when it's movie time, you have to produce a better story.

Enough of the non-sports excursion.  I'll be back to sports cards next time.  Again, Happy New Year everyone, and thanks for reading!