The 2003 Fleer Tradition set features current players coupled with the design of Fleer's original 1963 set - well original set with current players. They did have earlier sets which we will briefly discuss later in the post.

I picked up this pack at a recent card show to couple with a few packs of 04 Topps Heritage to a round dollar amount.

This set consists of 485 cards, with the first 100 short printed and the most desirable. There are also Relic "Hits" inserted 1:20. Hobby Packs contain 10 cards, Lets have a look: 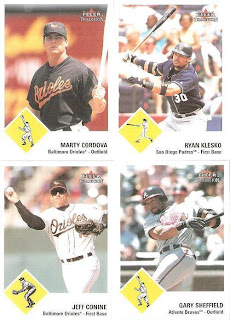 
The Inserts with Henson and Peavy: 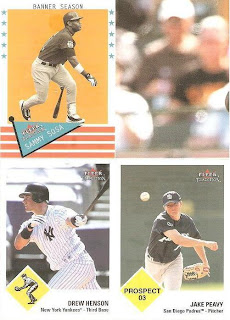 Flip Sides of the above: 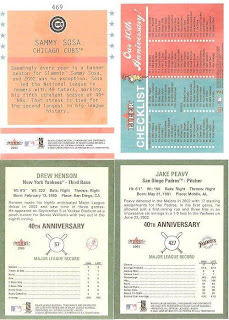 This pack turned out ok - No Phils although Conine was a future Phil at the time. Couple of Orioles and a somewhat noteworthy short print. The Sosa card was probably pretty bangin insert back in 03. Peavy is easily the best of the bunch among active players.

The Sosa insert mimics the design of the 1961 Fleer cards which featured baseball greats such as Babe Ruth, Ted Williams, Ty Cobb, Cy Young and many others.

I don't have any of the '63 cards in my collection, but these appear to be pretty faithful to the originals - except that they are almost all action shots. This pack was a throw in pack and it was entertaining enough - Most are up for trade, I will probably keep the Conine and the Henson.

That was the year after I stopped collecting. I always like seeing cards I haven't seen before.