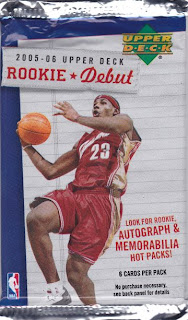 This is the second pack in a repack box that I purchased a little while ago. I never really completely understood the concept of a set called "rookie debut" that seems to contain nothing but star veterans and journeyman bench players. Or, perhaps, I just was given the wrong pack. 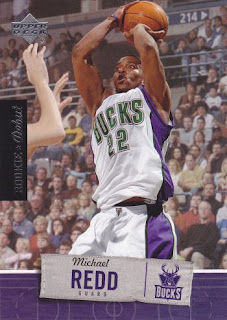 53 - Michael Redd (Redd is a great player, but he has the misfortune of playing for the most forgettable franchise in the NBA. No, the Bucks aren't as bad as the Clippers, the Kings, the T-Wolves or even the Nets - this year, ouch! - but I always seem to forget their mere existence. Sidney Moncrief would probably be rolling over in his grave right now if he read this... but he's not even dead.) 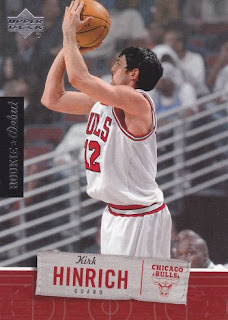 11 - Kirk Hinrich (Some point guard that Blazers fans coveted for years. I don't really understand why.) 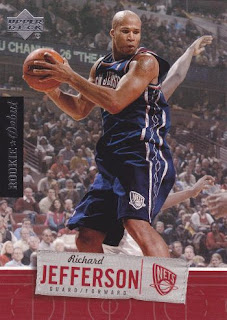 59 - Richard Jefferson (Jefferson was supposed to make the San Antonio Spurs into yet another reborn championship contender this season, but they're having a hard time escaping the fact that most of their key players are past their prime and that their core 3 players - Duncan, Ginobili and Parker - can never seem to be healthy at the same time.) 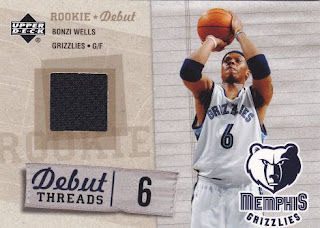 DT-WE - Bonzi Wells Debut Threads (Oh no, this is my first ever NBA relic card. I was hoping I'd never run into something like this because I don't really have anyone to trade basketball cards with. I can't even find a decent basketball card blog, to be honest. Bonzi Wells is pretty much a clown. I remember watching his first NBA game - I can't remember if it was his actual debut or just his first game with meaningful action - and I had a lot of hope for the guy. He turned out to be a Grade A jackass. I'd consider setting this thing on fire, but I looked at the black piece of fabric and turned the card over and realized that it's an "authentic piece of a shooting shirt worn by Bonzi Wells as a member of the Portland Trail Blazers." Ahhhh, crap! I have to keep this stupid thing now. And, really... "shooting shirt"... is that the official term that we're using now?) 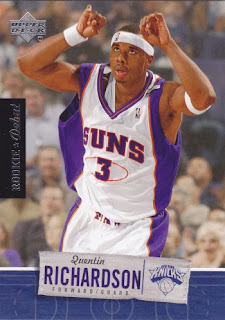 76 - Quentin Richardson (Q is showing the signs of his symbiotic relationship with ex-Blazer Darius Miles. They both enjoy the "devil horns on the head" gesture and often use it to alert each other when prey is near.) 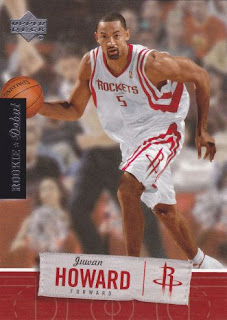 34 - Juwan Howard (Juwanji! Ugh, okay, the Blazers have lost their starting small forward and defensive stopper from last season, Nicolas Batum, and have also lost their small to power forward swingman Travis Outlaw for the bulk of the season. The Blazers experimented with Howard as the backup '4', but it didn't go all that well and they've rightly designated some playing time to rookie Dante Cunningham. Howard was brought in as a great locker room guy, and that's fine, but I really don't want to see him playing 20+ minutes a game.) 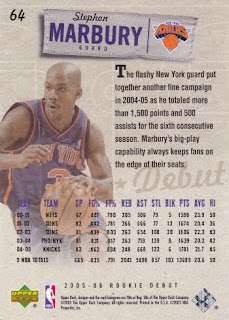 64 - Stephon Marbury (Oh, Starbury, I hope that Allen Iverson has looked you up and joined you at the bar for the selfish stat-centric former point guards that didn't especially like to pass or deflect praise and sacrifice for the good of the whole.)

The Bucks are far from the most forgettable franchise in the NBA.
Just to mention a few that is more forgettable: Toronto Raptors (basket in Canada?, Memphis Grizzlies (only remembered them because of one of the cards in your pack), Charlotte Bobcats (if they still excist that is), Oklahoma City Thunder (who????), Golden State Warriors (too many NBA teams in California and this one doesn't even have a city), Dallas Mavericks (never the first Texan NBA team you remember, or the second, you'd be lucky if they are the third. Plus probably a few teams I have completely forgotten about. Kansas City Raiders? Syracuse Senators? Ottawa Ramblers? Something like that.