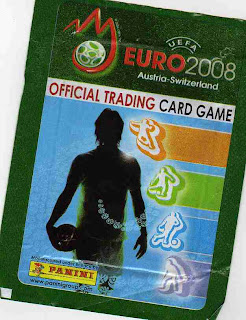 Not the newfangled ones that make Gellman cringe, the oldfangled ones Panini was pumping out before they got all Americanized. This pack came from Jack Plumstead AKA the Pursuit of '80sness guy. I got these a long time ago, wanted to save 'em for the beginning of footie season, didn't know when that was, then flaked and didn't post 'em when a tourney was going on a few months ago. Now that the MLS cup is here and France screwed Ireland soccer is all topical so here they are for your enjoyment. 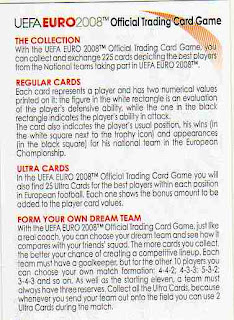 Yep, it's a game. Just like real soccer, I have no idea how the game is supposed to be played. Here are the real cards. I have no clue who any of these people are but I'll try to think of something to write about 'em all. 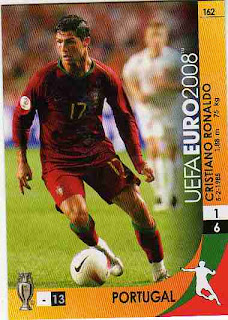 Er, Christiano Ronaldo or however you spell it. Who the heck is this guy? His Wikipedia article "Ronaldo is better than George Best" That's just preposterous. You can't be better than best. Learn English grammar Wiki editor dudes. If he was really so great he wouldn't have to do beefcake photos on the side to make more money.
131 Clarence Seedorf
142 Emre Belozoglu 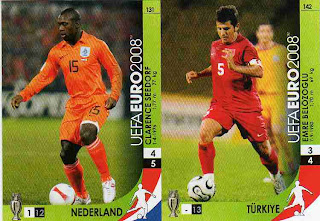 These two are practically the same card. I really tried hard to figure out how to play the game using those numbers on the bottom and side, but gave up. As far as I can tell it's War with delusions of grandeur.
76 Gianluca Zambrotta
6 Gianluigi Buffon 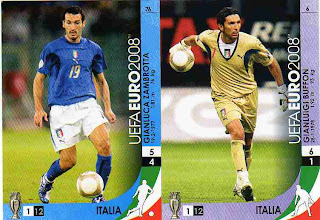 VIVA ITALIA!
Yay Italy! I'm a quarter Italian and Scotland isn't really known as a football powerhouse so I usually gravitate towards rooting for Italy when it's World Cup time. I don't know who any of them are, I just look for the blue unis. In 2010 I'll have to change my name to Giandayfo Campbellini and paint myself blue to support the squad.
215 Miroslav Klose 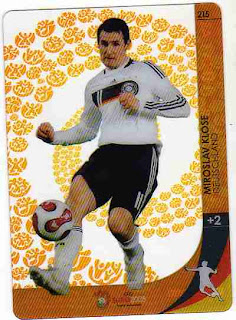 This is some kind of clear plastic insert. The +2 on the side is used as some kind of bonus for the game. It's a pretty funky looking card with those shiny swirlies going on behind the player. Looks like Dock Ellis playing soccer. I'm also part German so if Italy flames out I always have Deutschland as a backup World Cup team. There are advantages to being a mutt!
For a soccer card review by someone who actually knows something about the sport, go here.