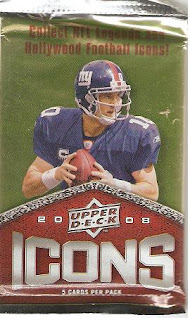 I saw couple of packs of the 08 UD Icons in the budget bin at K-Mart and couldn't pass them up. With 6% PA Sales tax the cost of a 5 card pack was 52 cents. This set is relatively recent and I am surprised that there has yet to be a pack busted here on A Pack to be Named Later.

I think 2008 was the inaugural edition of UD Icons which consists of 100 base cards. In addition to the typical Auto and Relic cards there are a variety of serial numbered cards including a 150 card rookie set, a Football Legends Series and a special set dedicated to Movie Icons.

This is a retail pack and there are no odds specified on the packaging. 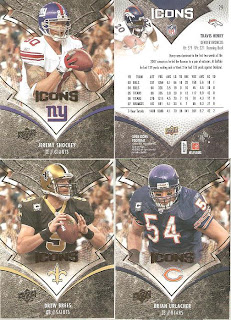 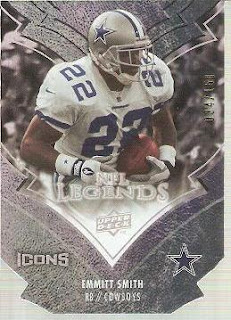 The final card certainly helps out this pack. The NFL Legends consists of 100 cards and the Rainbow Die Cuts are a #d parallel. It's not an Auto, but this is a pretty good pull for a retail pack. If I understand the seeding odds from the UD Press release link above, there are only 2 Legends Die-Cuts per Hobby Box - good pull from the bargain bin. I opened up one other pack of Icons and came away with 5 base cards. On a personal level neither pack had any Vikings or Eagles so that was a dissappointment. I will have the pack up over at Phungo hopefully later tonight.

For more retail of 08 Icons click here to see what Squeeze Play Cards found or for a Hobby Box Break check out Sports Card Info.


One quibble with the Emmitt Smith card: 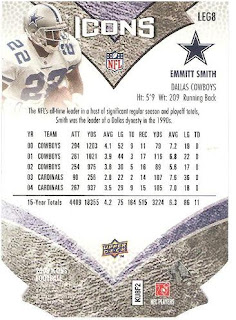 Upper Dreck does this pretty much as a matter of course - they typically put the final year or years of a retired players statistics on the card. C'mon UD, we all know that Smith played out the string with Arizona, but he will always be remembered as a Cowboy. Do we really need to know that Emmitt averaged 2.8 yards a carry in 2003?

I am sure that there is someone out there that wants the Emmitt Smith parallel more than I do. Let me know and we can work out a deal.

Cool find from retail. Always nice to get something nice from packs that don't cost much.