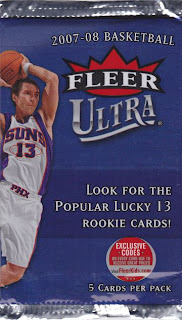 Here's the first pack of repack box that (unfortunately for my wallet) further rekindled my interest in basketball cards. This pack didn't do a whole lot on its own to do that, but you've got to start somewhere, right? 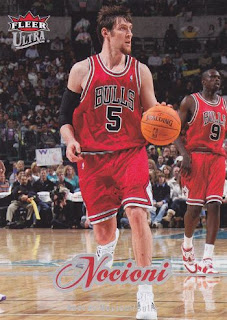 26 - Andres Nocioni (Nocioni is one of the lesser known Argentinian NBA players - the best known being Manu Ginobili. He recently headed to the sinking pit of a franchise that is the Sacramento Kings after spending the first part of his career with the perpetually up and coming Bulls.) 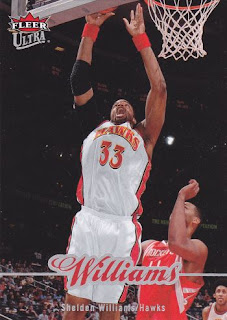 6 - Shelden Williams (This pack is a little older than I thought, as I did a double take when I saw the Hawks old jerseys. I like their current jerseys, but I wonder what made them decide to pretty much go away from red altogether.) 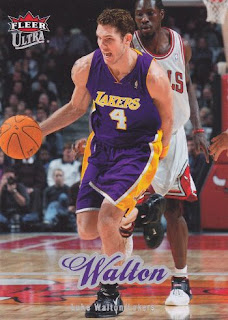 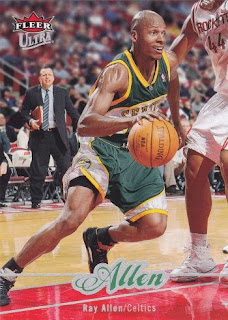 175 - Ray Allen (Ray Allen left the Sonics behind and then the Sonics left Seattle behind and became the abomination of a franchise that they are today.) 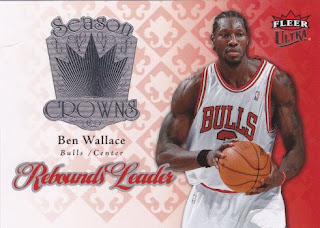 SC-21 - Ben Wallace Season Crowns (Ben Wallace has been in decline ever since he left Detroit. When this offensively challenged player lost his usefulness on defense, he pretty much became a worthless player.)
Does anyone collect basketball cards at all? Drop me a line if anyone is up for a trade (hint: I don't intend to keep any of this stuff if it's not Blazers-related.)

If you do end up getting back into basketball, boxes of 2007-08 Ultra are a lot of fun to break open. The price has dropped big time and there are some nice cards that you can pull out of there. It's got all of the Upper Deck spokespeople in there.