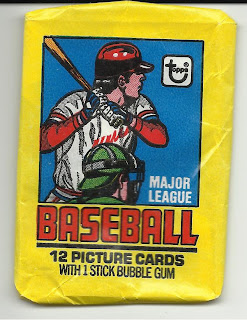 It has been quite a while since I posted here last, but since I am in full-swing with my "Tribecards from Outer Space" daily pack break, I thought I would share some of the packs that I open.

Today, I am bringing you a pack of 1979 Topps Baseball Regular.  Before I start, though, I would like to point out that this pack was purchased from eBay and had a nearly perfect wax sealing on it. Usually, that means the pack was opened, searched, stars removed and replaced with commons or not-quite-stars, then heat-sealed with a blow dryer. In any case, it is still fun to open a pack from the 70's.

We've got Willie Horton, Rick Bosetti, and Rick Auerbach. I like that the photos are nearly the full size of the card with just a hint of border. Of course, this was the 70's, so centering might be all over the place. The photos themselves bring back memories of Polaroid cameras. Or, really, the old 110 film camera that I carried around as a kid. I digress. Often.

Next up, Doug DeCinces, Roger Freed, and the Braves Checklist. Had I opened this pack in 1979, I would have been thrilled to snag a DeCinces card! I have several of his cards in my "Non-Indians Players" collection.  When I was a kid, we never thought about condition, so the Braves checklist would have been marked up with any Braves cards I had.

Finally, at least as far as scanned photos go, we've got a Rangers Prospects card, Ed Glynn, and Fred Lynn.

When we were kids, my brother and I had a nickname for each of the card sets. This was "The ribbon kind," I believe.

The entire pack consisted of these cards:

You are correct. All the valuable cards have been removed, not a single Tribe card!!