Written by Jafronius at 11:21 PM
Greetings!

Hope everyone's ready for the weekend.  It's certainly been a long week for the good old U.S.A., from the tragedy in Boston, to the destruction in Texas, to the flooding in Chicago.  Thoughts and prayers to the victims and our faithful readers in the affected areas.

Since tomorrow sees the start of the NBA playoffs, it's time for a basketball pack.  Here's some 2008-09 Fleer Basketball Glossy Parallels!

If you purchased a blaster box of 2008-09 Fleer Basketball (I picked this up a while back when one had one of those reduced price $12 stickers on it), you had the chance to pick up 2 packs of Glossy Parallel cards.  They were the same design as the base set, except they had copper borders and were glossified.  Take a look at a base pack if you're interested.  Here's what I got in one of my packs: 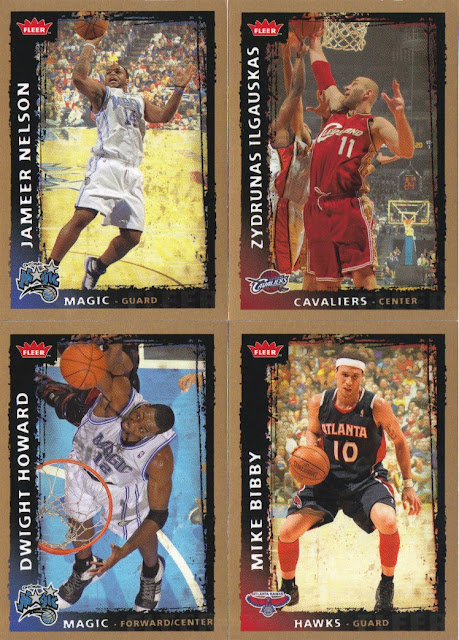 The borders strike me as something from the 1990's.  The photography's pretty average; they did a good job on the 2 Magic players. 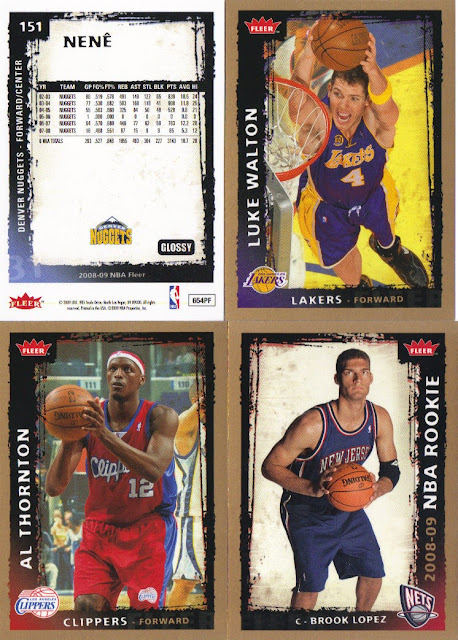 Showing the back of Nene's card.  The front's just him walking off the court pumping his fist...nothing exciting.  The backs of the base set look the same, without the Glossy bubble, of course.  The backs could have benefited from a brief write-up, but notice they don't include the player's birth date or school attended either.

Anyway, that's the pack.  Enjoy the playoffs...I say Heat and OKC in the finals (that's a stretch).  Thanks for reading!