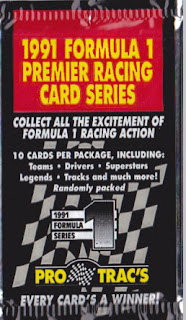 Early 90s is a strange time for the hobby. They would print anything out. This is one of them. Auto racing cards been around. Maxx printed NASCAR while All World printed Indycar. This Canadian company called Pro Trac's printed 200 card set of 1990 and 1991 Formula 1 season. Formula 1 is a racing series that raced on road and street circuits all over the world. Teams built the car and drivers raced it. The series is still on its high at the time before big money ruined the enjoyment but that's another story. On this pack I got 11 cards instead 10 as listed. Here are the cards. 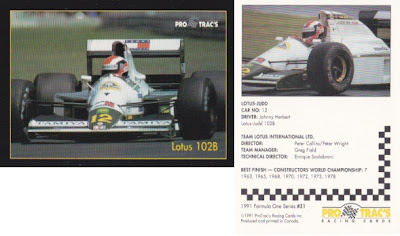 31 - Lotus 102B (Johnny Herbert) - front of the cards are black border while the back is white filled with info on drive, engine, management, and best finishes in constructor standings. Lotus 102B is 1991 car driven by Johnny Herbert. He drove the car in 7 out of 8 races he entered with his best finish 7th in 1991 season. He continued drive for the team til Lotus left the series at end of 1994 season. He would go on driving various teams winning three races. Last drove in the series in 2000. 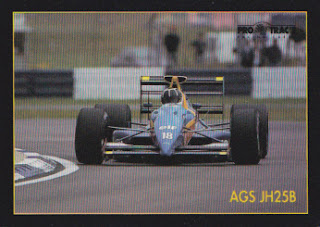 44 - AGS JH25B (Fabrizio Barbazza) - 1991 is final season for AGS as the team struggled to qualify for the races. Fabrizio Barbazza couldn't qualify the car in 12 tries. Barbazza would bounce around various series til a career ending accident at Road Atlanta. 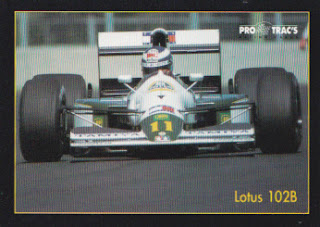 27 - Lotus 102B (Mika Hakkinen) - Another Lotus car this time with Finnish driver Mika Hakkinen. He drove for the team for two years before becoming McLaren test driver in 1993. Once Michael Andretti left McLaren he took over the car and stayed with the team retiring in 2001. In that span he won 20 races and two championships (1998, 1999). 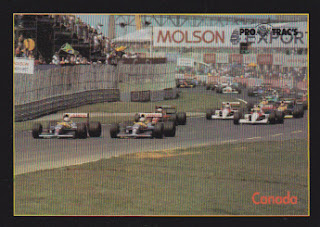 85 - Canada -  a track card. Race action on the front, back of the card showed track design, the circuit, miles, and records. The track is Circuit Gilles Villeneuve in Montreal where they been running since 1978. A dispute between FIA and the circuit (money) led them not have a race in Canada in 2009. 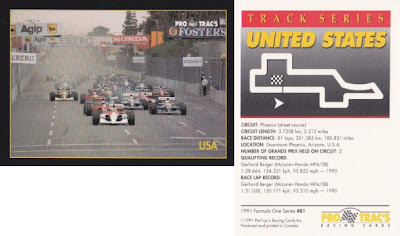 81 - USA - the street circuit in Phoenix. Ran for three years from 1989-1991 to laughable attendance. In 1990 ostrich race in Chandler outdrew the race. After 1991 season Formula 1 did not run in US til 2000 at Indianapolis road course. They would run at Indy til 2007 when big money rear its ugly head. USGP made another return in 2012 this time at road course in Austin. 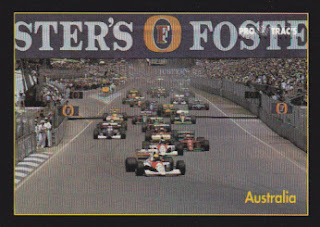 96 - Australia - the race was held at streets of Adelaide where it ran from 1985-1994 before moving to current location at Albert Park. At time it was host to final race of the season. 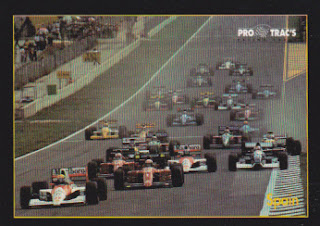 94 - Spain - Catalunya track where raced there 27 times. This year they are going be at Valencia track. 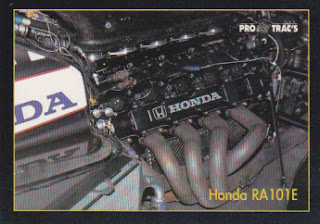 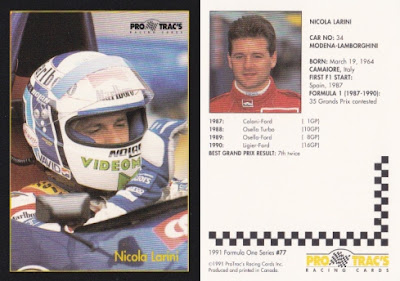 77 - Nicola Larini - hey look a driver card and it has stats. In 1990 he drove for Ligier finishing the season without any points. His best finish of his career in 2nd in 1994 in the dark weekend as two drivers were killed including three-time champion Aryton Senna. 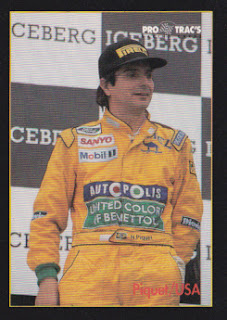 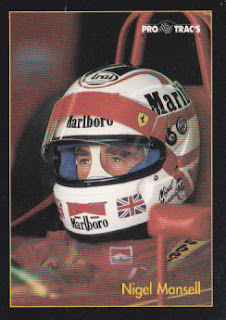 131 - Nigel Mansell - Nigel in a Ferrari where he drove for the team in 1989 and 1990. A colorful career as he won 31 times and a championship in 1992. He left the series driving for Indycar where he won the championship there then left after embarrassing 1994 season returning back to F1. His return in 1995 is more embarrassing driving in two races for McLaren before completely quitting in dramatic fashion.


This pack features three cars, four tracks, one engine, two drivers, and driver highlights. I rather have few more drivers and cars.