Hope everyone is doing well.  Since it's Final Four weekend, I thought I'd put up some basketball cards...but it's not just any old pack.  It's a Fairfield $5 Jumbo Repack...Basketball Edition!

There's no need to bore you all with all of the cards, so here are the highlights.  From the top half: 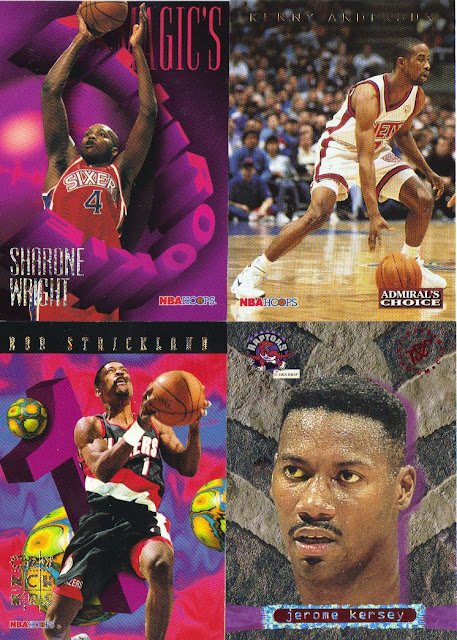 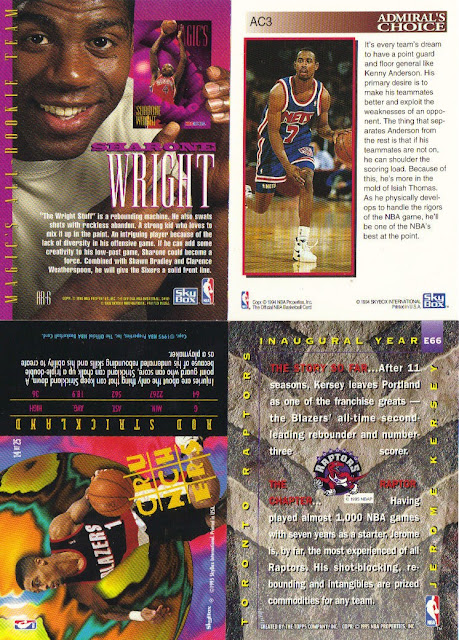 Here's some of the commons in the top half: 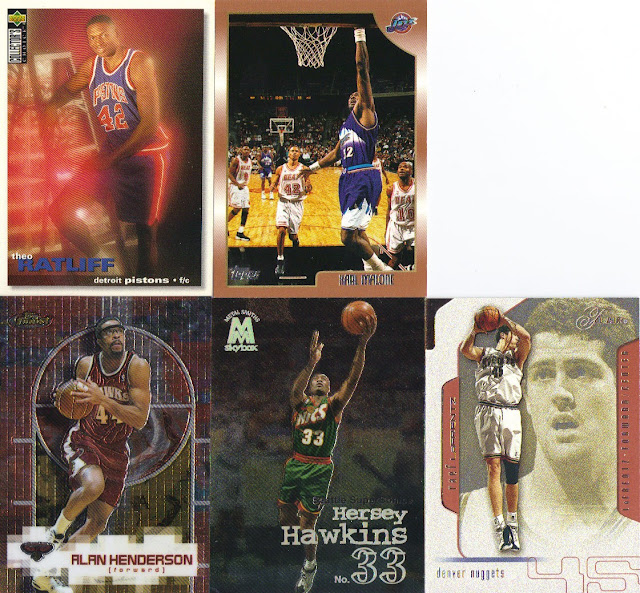 I always found the soft-light they used in those Collector's Choice cards amusing.  I was surprised to find the Finest and Flair cards in the pack...same goes for the SPx Kapono card below (apologizes for the scan; that's supposed to be a spiky-haired Jason staring at you).

Gotta love Shackelford's flattop.  And I do like the Mount Mutombo vs. 'Zo duel in the vastness of space card. 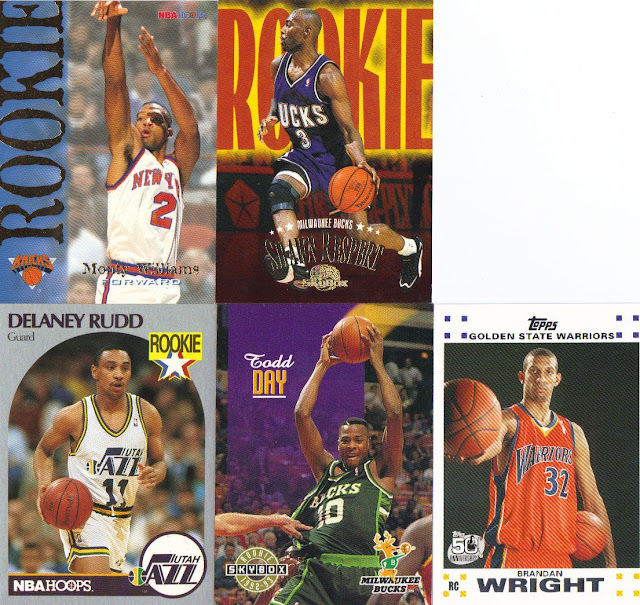 The pack promised 5 rookie cards and I got them in the top half (that sensitive Theo Ratliff is also a rookie card, making it 6).  I haven't seen that white border 2007-08 Topps card before.  A quick internet search revealed that it's part of a 14-card set (Brandan is #8 of 14).

To wrap up the top half, here are some common card backs: 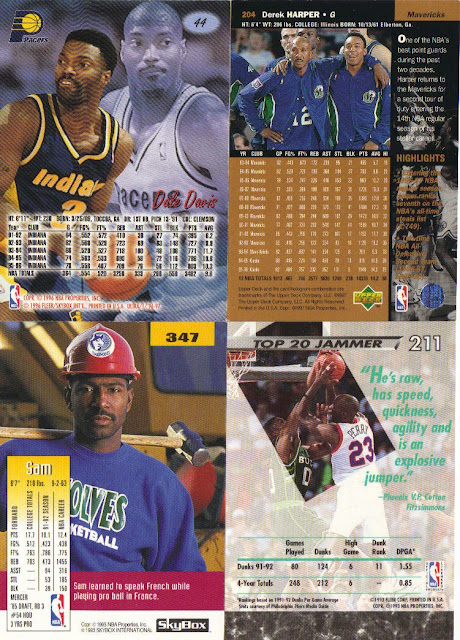 I like how the Ultra card has Dale Davis with and without hair.  And how did Skybox track down Sam Mitchell on a construction site?  BTW, Sam's shown as a Pacer on the front of the card.  Finally, the Top 20 Jammer card is of Tim Perry, from 1992-93 Fleer Ultra.  It has a NBA Jam Session logo on the front of the card.  Take a look at the stats on the back...Dunks Per Game Average?

OK, time for the bottom half: 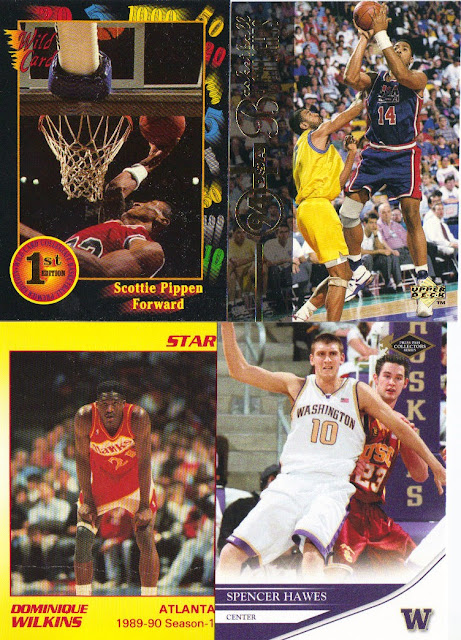 The foursome above shows the range of cards in the pack.  You've got a logo-less Pippen from 1992 Wild Card, a 1991 Star Wilkins, a 1994 Olympic 'Zo, and a collegiate Press Pass.  I like the Dominique card, even though you can see the crease going though his shins. 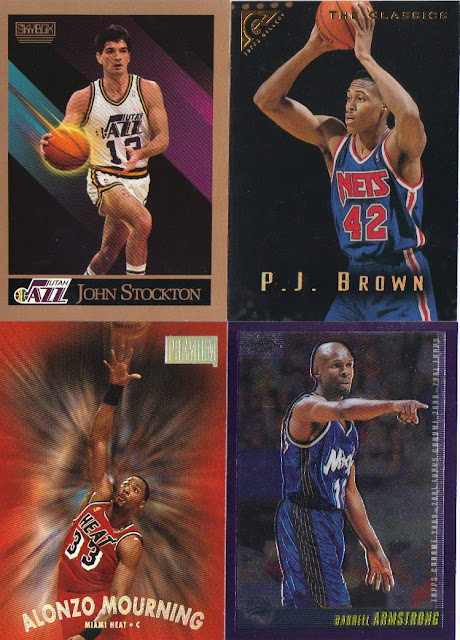 More commons.  Surprised by the Chrome and the Topps Gallery. 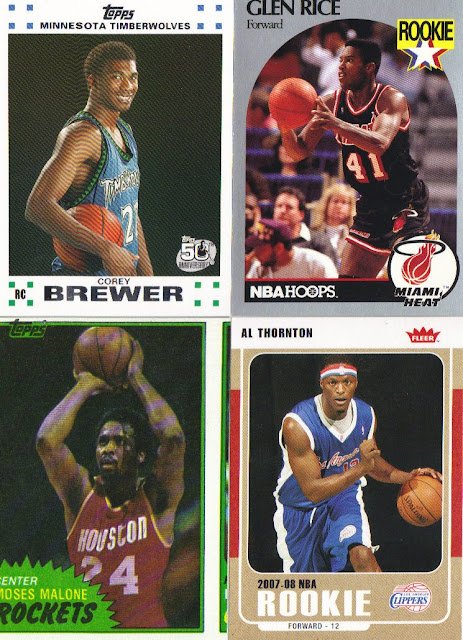 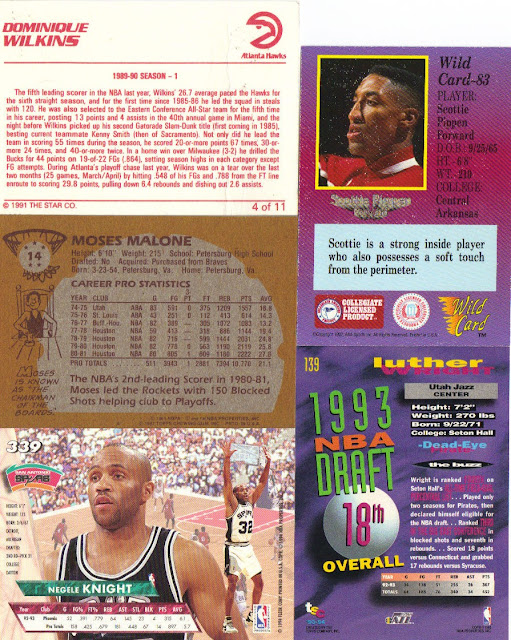 I don't remember why I scanned the Luther Wright back.  Probably because most of the card is devoted to the big Topps Stadium Club fonts and not to the player's stats.  As for Negele Knight, take a look at the background.  The white team's got the ball (it's being covered by the copyright info).  You can clearly see 3 of the red team's players in the image; they appear to have no idea where the ball is.  I even like #4 (standing on Negele's right shoulder), looking at the stands, guarding no one.

In case any of you were interested in the range of years in the pack, here it is:

As you can assume, most of the cards came from basketball's junk wax era.  Still, overall it was a decent pack for five bucks.  I was expecting all commons, so getting some higher end cards like Chrome and SPx was a nice surprise.  Anyway, that's it for now.  Have a great weekend...thanks for reading!