Written by Jafronius at 11:28 PM
Greetings!

Hope everyone is having a great weekend.  Chicago sports fans are feeling pretty good, as the Blackhawks are up 2-0 on the Wild, and the Bulls just took Game 7 from the Nets and get to lose to the Heat (I hope I'm wrong, but beating Miami is not realistic...they should give them a good fight though).  As for the Cubs and White Sox, well, 2 out of 4 ain't bad.

I'm too lazy to play with Blogger's schedule / timer / whatever you call it function, so I'm posting this a day early.  In honor of Cinco de Mayo, here's some 1991 Kelloggs Leyendas Hispanas del Beisbol!
I was not able to find any specific info about this set on the interwebs.  I know it's a 10 card set, and based on the cereal images on the back of the title card (see below), I would imagine we got the cards from either a Frosted Flakes or Froot Loops box (kids don't eat Corn Flakes unless they have no choice).  I also couldn't tell how many cards came in a pack; I'm just going to assume 5 cards came per pack and show you the cards already: 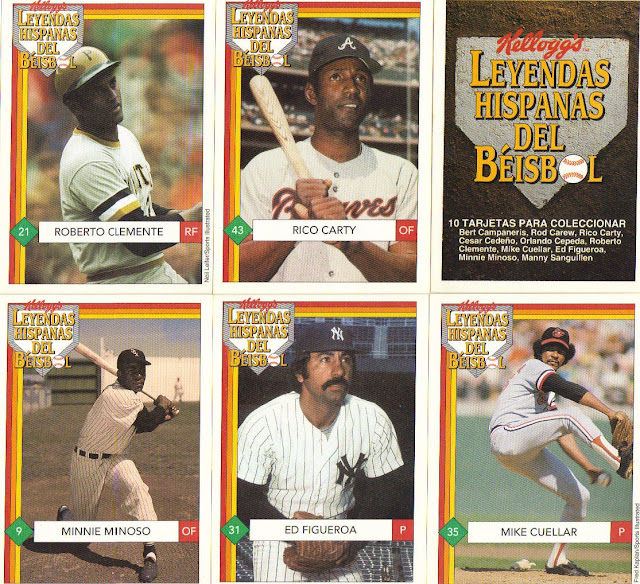 The cards are unnumbered, so typing the names out is pointless.  Notice that these cards are MLB approved, as you can clearly see the team logos on a couple of the cards.  Here's the backs: 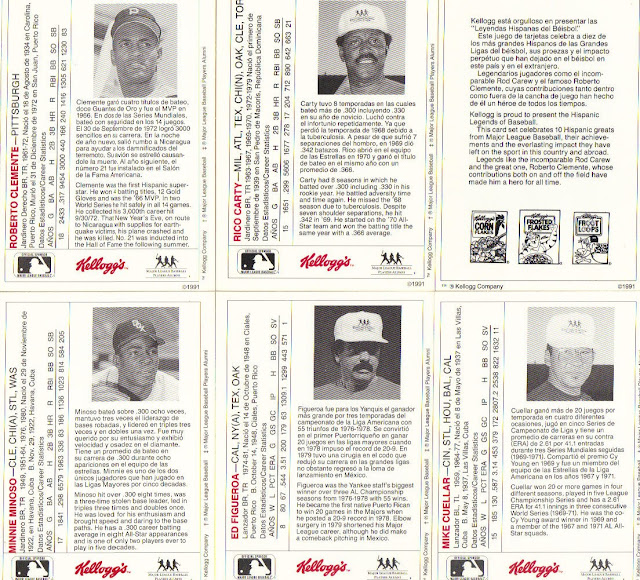 The backs are not bad either.  The picture on the back is not a duplicate of the front and there's a brief write-up of the player in Spanish and English (notice the Spanish is in the stats and also gets top billing).  Three of the Legends are wearing Major League Baseball Players Alumni hats; this is the only place I've seen that logo on a card.

Here's a closer look at the Clemente back for those who are even more curious: 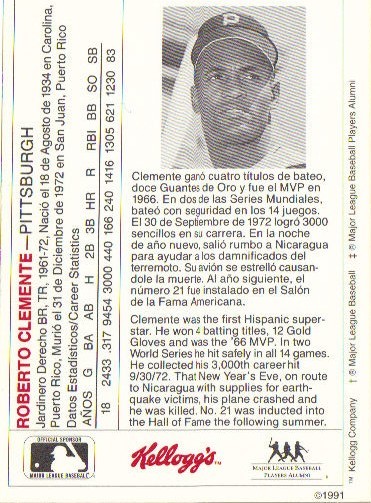 Anyway, that's the pack.  It would have been nice to get the Rod Carew card, but obviously Clemente's the winner of the set.  Eso es todo por ahora ... gracias por leer!