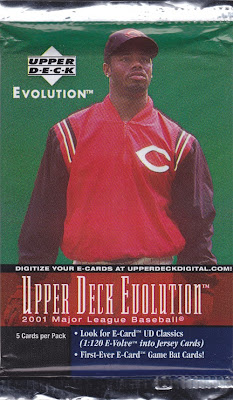 Baseball cards has evolved, man, and you missed the boat. Ken Griffey Jr. was on that boat. Heck, Griffey was on pretty much every boat that Upper Deck trotted out from the early '90s until 2009. How many pack wrappers have you seen with this face on them? Actually, Griffey looks more and more like a golfer here the more that I look at him.

Apparently, I am to look for cards that "E-Volve" into jersey cards. Is this a Pokemon thing? 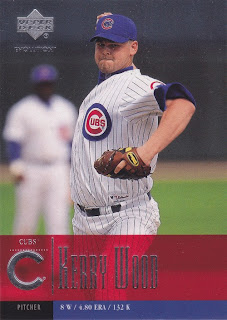 57 - Kerry Wood - Say what you will about Kerry Wood's career, but not many people on earth can rightfully claim that they've struck out 20 batters in a major league game. 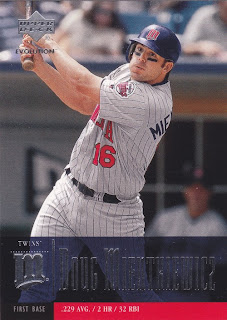 31 - Doug Mientkiewicz - Posting old packs here means occasionally having to take one for the team and spell out the name "Mienkiewicz". 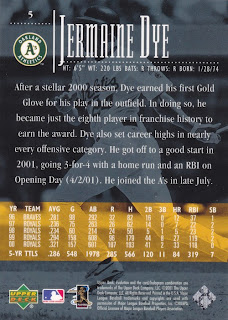 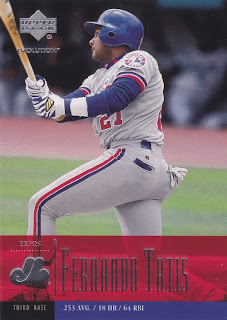 67 - Fernando Tatis - Tatis was a bit of a one year wonder, but he had that big year with the Cardinals and I'm okay with that. 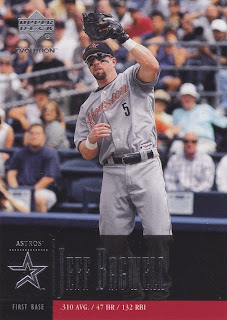 41 - Jeff Bagwell - It's just a five card pack, so Astros legend Bagwell will end things here. I do find it strange that the player's stats from his previous season are printed on the front without explanation.

All things being equal, Griffey on the pack is a major deciding factor for me when it comes to which pack/repack box to buy.