Written by Fuji at 9:00 AM
Calbee is a snack company in Japan that's known by some collectors for their trading cards.  Each year, Calbee releases certain snacks with specially marked packages that have packs of cards attached to them. 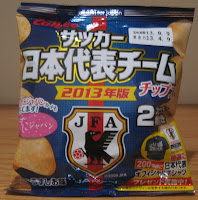 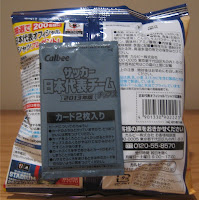 I recently picked up a case of 2013 Calbee JFA Football potato chips in hopes of finding a Keisuke Honda or Jungo Fujimoto card.  If you're wondering, these particular chips are similar to Lay's classic potato chips (the kind you find in the yellow bags).

Here's a closer look at the actually pack of cards: 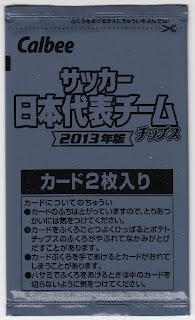 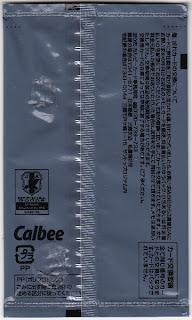 Each pack contains only two cards.  From what I've gathered there are 53 cards in the base set, 3 checklists, and a pair of insert sets:  Goal Scorers (16 cards) and Overseas Samurai Blue (17 cards).

I ended up pulling a pair of the base cards in the first pack from my case.

Yano has been a defender on Japan's national football team (Nadeshiko Japan) since 2003 and has made 67 appearances.  She recently retired from her club team (Urara Reds Ladies).

My second card was another defender, but this time it was a member of Japan's male national football team.  Inoha has been on the team since 2011 and has made 16 international appearances for the Samurai Blue.

I know these cards aren't for everyone, but if you enjoy oddballs, food issues, or football cards... then it's a really cool product.

I ended up busting twenty-three out of the twenty-four packs (I kept one for my Japanese Wax Pack PC).  Here's the breakdown of the forty-six cards I pulled:

As soon as I'm finished eating all of these chips, I might go out and buy another case of these.  In terms of value, I'm not sure you'll get your money back.  But the cards look amazing and the set would definitely be a welcomed challenge.