Written by JediJeff at 12:32 PM
Baseball season is in high swing, hockey and basketball are in the playoffs, so let's rip some football. I normally collect just baseball and hockey, but at my LCS's pack wars, you rip everything. Here is Upper Deck's football offering for this year. No NFL license, so UD is releasing cards through their license with the NCAA 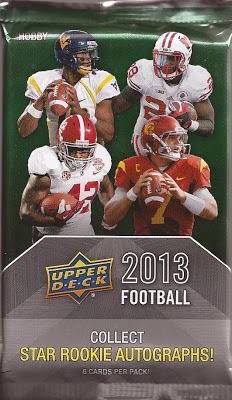 Upper Deck wanted you to be sure you knew this was a hobby pack from the designation in the upper left. Six cards in the pack and we are looking for rookie autographs. Umm....UD? This is college - everything will be a rookie autograph, unless you are sneaking in some ex-NFLers. 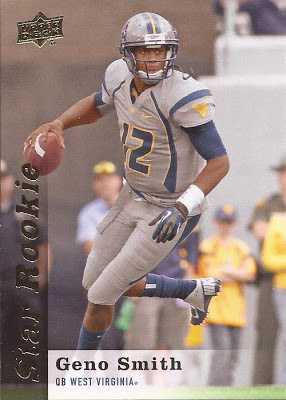 Guess we have a nice start. Again - I do not collect, so I don't really know who the heck I pulled. But I know the name of Geno Smith. Ugly as hell gray uniforms. Simple card design with the gold foil. Name not in foil is a plus. It's so easy to read. 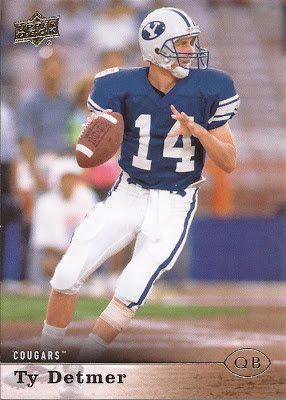 Another name I know. I guess this is what the reference to "Star Rookies" was, as Ty left college in the early 90's for a journeyman career in the NFL. Currently he is the coach of a high school team. 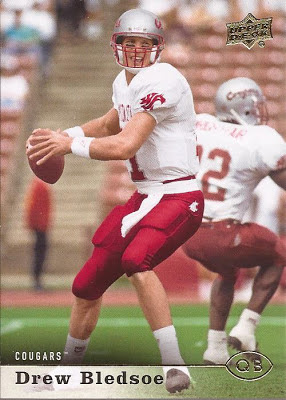 Maybe I know more bout football than I think. Lack of borders looks so very nice on these cards, as does the lack of foil. If you notice on Drew's card (and Ty's), the only foil is that line between the team and player's names that runs to the right until you get the football with the position notation. 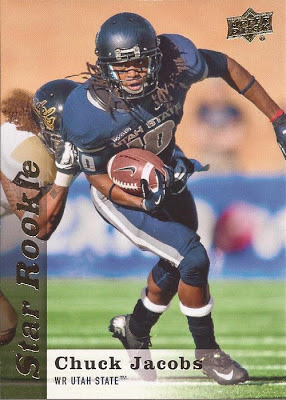 Alright - cancel my invite to the MNF booth. I have no idea who this guy is. Plus we are back to ugly as hell uniforms. Why can't the colleges just stick to tradition? Dig those uniforms that Ty and Drew are sporting. GORGEOUS! 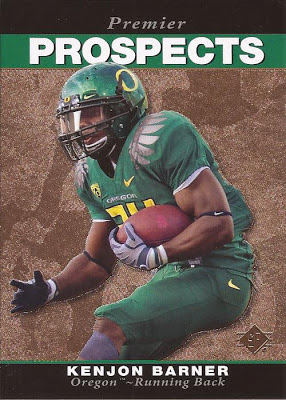 Here's some insert card. No idea how they fall - probably 1/1 or 1/2. Think of UD Black Diamond - same hashing in the background. I will not beat the dead horse about what he is wearing. 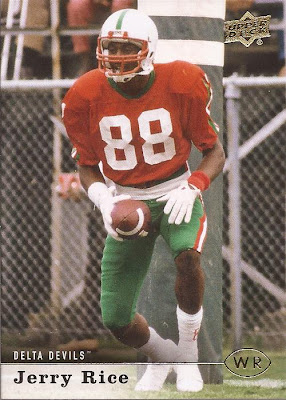 I know this dude! But what I did not know, until this post, is that he played college for the Mississippi Valley State Delta Devils? That's a real college?! First look at this card and I thought Jerry attended Univ. of Miami. 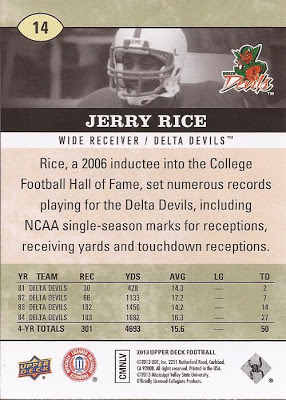 Card backs. You get their entire college career on the back. Guess since the standard lately is 5 year on the back of cards, there way no way UD could screw this up. Leaves all the open space for a nice bio. This works. When you don have a lot of stats to post, this view works really well.

I would love that Kenjon Barner card in the full glorious splendor that is an Oregon Duck uniform if you're not somehow attached to it.