Written by jacobmrley at 12:34 PM
I have no idea if this is cheating or not but screw it, I am posting it anyway. I recently purchased an unopened pack of 1992 Topps Gold Winner cards on eBay, which were only available through a convoluted mail-in contest that was impossible not to win or to manipulate to win easier than it already was to win.  Topps ended up making these particular cards that you got through the mail with the added notation 'winner' because you could read the contest cards by holding them up to bright light.  Thanks a lot, Thomas Edison.  Let's take a look: 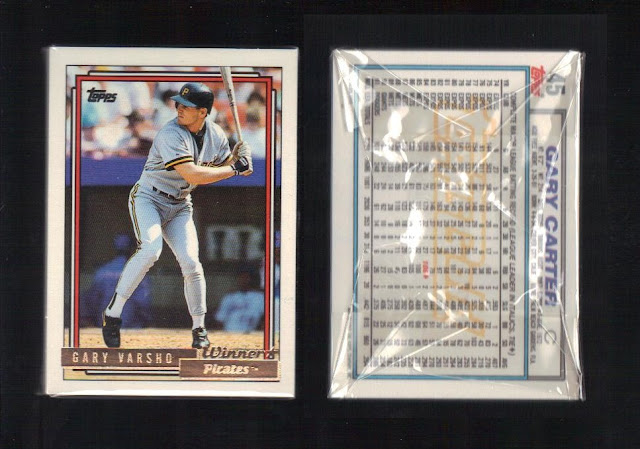 There is no colorful wrapper involved here, which is disappointing, but you can clearly see they are wrapped in clear cellophane. Gold foil cards were the absolute be-all-end-all in 1992 for Topps.  After testing the process in 1991 Bowman and Stadium Club, they went all in by making the entire set in parallel with shiny shiny gold.  There are 10 cards inside this pack, so here are the first nine: 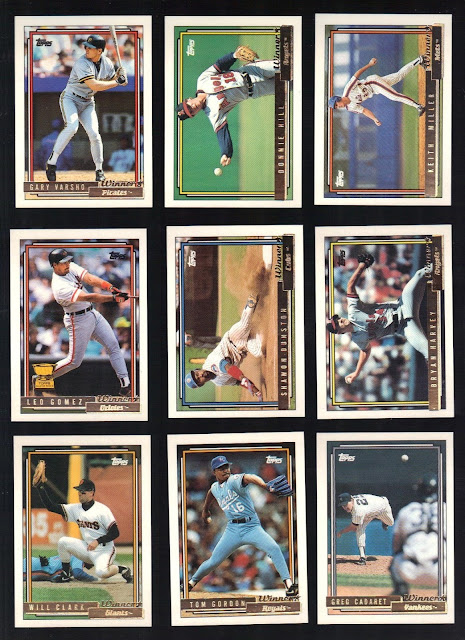 In order here, we see Gary Varsho, a player I haven't thought about in 25 years, Donnie Hill, who is out of his element, Keith Miller, who once hit .373 for the Mets! (kinda), Leo Gomez, who has a rookie cup going for him, which is nice. In the middle is Shawon Dunston, who has extra letters in his first name and extra zip on his throws to first, then Bryan Harvey, who isn't even the first "Bryan Harvey" listed on google, Will Clark, who I never liked but had one hell of a nifty swing, Tom Gordon, AH AHHHHH! HE SAVED EVERY ONE OF US! and second to last but not least, Greg Cadaret, another player I haven't though of this century. 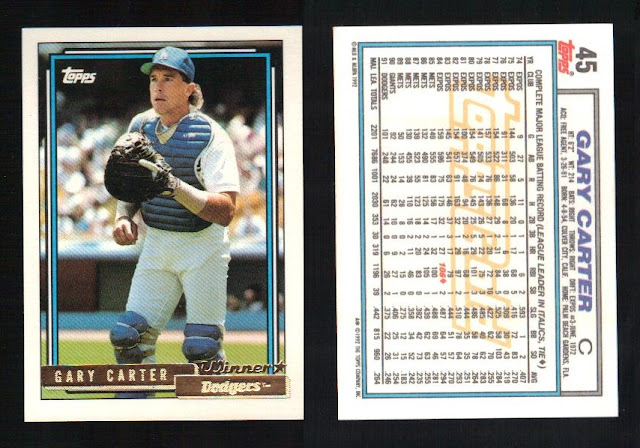 And this card here is why I bought the pack.  I have long owned the regular, harder-to-find, plain front Gold card of Gary Carter but somehow over the decades never procured the 'winner' version.  But looking at a sharp photo of The Kid in Dodgers blue and his catcher gear with some OG gold foil on the front, we are all winners here.

I remember the days of sitting in a pitch dark room with a powerful flashlight and Topps scratch off cards. Good times.

I'm surprised the scans are so clear and the gold foil on gold foil names can be read. Even in real life it is hard to read the dang foil lettering on these cards. Most scans it is impossible.