Written by Billy Kingsley at 3:33 PM
The 2018 NASCAR season begins today! The Daytona 500 is the biggest event in the sport and first official race of the season, at least for the Cup series. (The lower tiers having started already). This is the big one! I saved a blaster of 2017 Absolute Racing to open during the race, and I thought I would share it with you as well.

Each blaster of Absolute Racing includes 5 cards- one is guaranteed to be a race used or autograph, one is a parallel of the base cards, and one is an Action Packed insert- Action Packed was a favorite of mine. It's not embossed anymore. 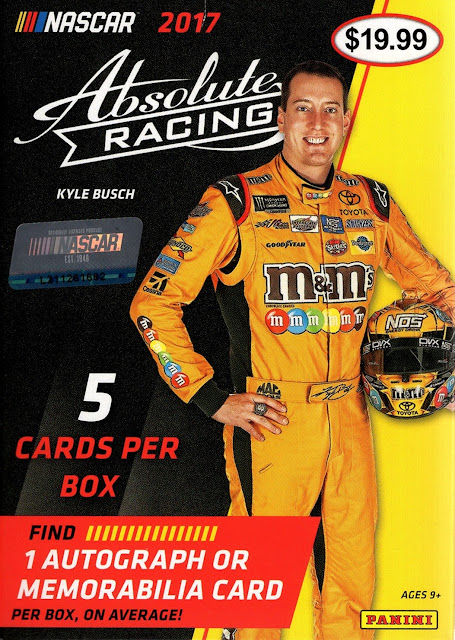 The actual pack is just clear cellophane so here's a box image.

First up was a parallel of the Action Packed insert, of Carl Edwards...who didn't appear on the Panini checklist, but I've pulled two of them now. To save time so I can get back to the race, this is a scan of the first one I got, not the one I got today. The only difference is the serial number.
Next up was this Spectrum Silver parallel of all-time legend Ned Jarrett. Because you can clearly tell when this photo was taken, as he's wearing the Fourth Rebel 300 badge, I can tell you that this photo was taken May 11th, 1963. He finished 20th in the 31-person field, three laps down. Not his best race there, just two years later he would win at the same track by a 14 lap margin- the largest margin of victory in NASCAR history. Yesteday's Xfinity race, NASCAR's second level, the margin of victory was .0004 seconds- or roughly 4 inches. Ned won two NASCAR championships (1961 & 65) and his son Dale was the 1999 Champion. Dale's son Zach was just drafted by the Baltimore Orioles in the most recent baseball draft.
Next up was my favorite card in the pack-
A large piece of sheet metal from AJ Allmendinger's Chevrolet! This is part of the grillwork on the nose of the car. Sheet metal cards are my favorite relic to get in NASCAR- it's part of the actual car! They aren't the most common to get as part of a card, either. Tires are the most common- the team use up to 8 sets each race- firesuit are the second most common, as they have a limited amount of time they are allowed to be used by NASCAR, so are changed often. The team Allmendinger drives for, JTG-Daugherty Racing, is co-owned by Cleveland Cavaliers legend Brad Daugherty, who wore #43 in honor of Richard Petty- thus meaning that the Cavs have retired 43 because of Petty while NASCAR hasn't! (NASCAR does not retire numbers)

The car cards are mildly short-printed in the base set. This is what NASCAR racing is all about! Danica is in her final Cup start right now as I type this, in theory. (I suspect she will come back)
Finally, a standard base card. You get one or two per pack. They are standard card stock, unlike most Absolute sets which are mirror foil. (I like this better, personally). The color stripes in the background are color-keyed to each team. 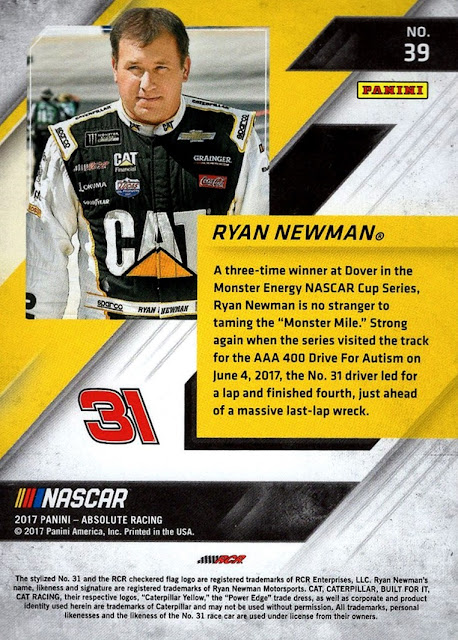 Here's the card back. Panini doesn't bother to give stats on ANY of the NASCAR sets. If they did, you'd see that Ryan Newman has run more than 500 races over 18 seasons, with 18 wins to his credit, returning to victory lane in March 2017 for the first time after a three year winless streak.

OK, back to watching the race! It is currently airing on Fox, and is shaping up to be a very good one, so if you've ever wondered about NASCAR- why not tune in today? The race is just about half over but that means you still have half to go!

And you can always read more NASCAR coverage on my own blog, Cardboard History. Thanks for reading!

Love that sheet metal from 'Dinger's car. You know what would be really cool? A race used card from his Indy 500 entry.

Crazy that there are only 5 cards per box. Cool sheet metal card. Thanks for sharing!

While not officially nascar does "retire" numbers. After the death of earnhardt nobody used number 3 until austin dillon. Even then he went to the earnhardt family and asked if it would be okay for him to use it. All of the owners basically agreed not to use number 3 out of respect.