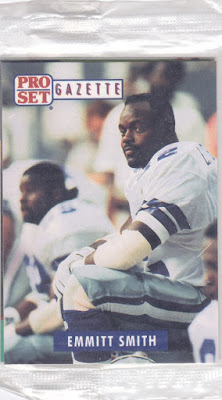 Nothing says 1991 more than Pro Set, which was at the height of its powers in the early '90s before their inevitable collapse. I also think that no one made more promo cards than this company. This is a pack that I found at the bottom of some box I've had for decades. It looks to have been released to promote all of their products, as you'll see in a bit. 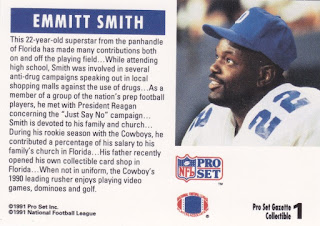 1 - Emmitt Smith (Pro Set Gazette) - As far as I can tell, this is the only actual promo card in the pack. The rest of the cards appear identical to their set counterparts and are probably not unique in any way, although you can never really tell with Pro Set. It's an interesting concept for a set even if it was never realized. There's no stats -- instead, you just have a write-up that you might find in a local newspaper. 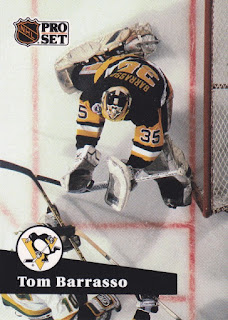 186 - Tom Barrasso (Hockey) - This is a really cool overheard shot of the Penguins goalie. There were both French and English language versions of this set. This is the English version. 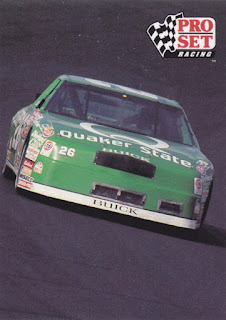 98 - Car 26 Quaker State (Racing) - I'm not even going to pretend to know anything about auto racing. The car is green. You don't see that every day. 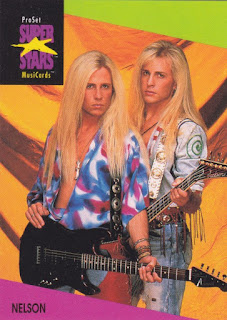 83 - Nelson (MusiCards) - This is familiar territory to me. I believe at one point I bought a whole box of this stuff. I still probably have some of it somewhere, if I didn't throw it away. I wasn't actually interested in almost any of the music in this set at the time (Nelson?!), but I still bought the cards just the same. 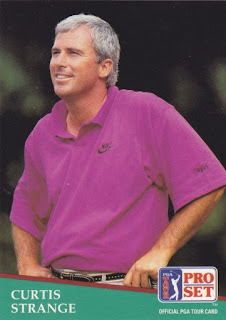 75 - Curtis Strange (Golf) - That Nike shirt goes really well with the card border color. It really does. I was always more of a fan of video game golf than actual golf, so I probably didn't watch Strange do his thing too often.

There's a superstition in auto racing that green cars are bad luck. The legend has it that the first driver killed in a race was in a green car, and it stuck- although at this late date it's impossible for anyone to know for sure, as that was in the 1890s.

The team, King Racing, was active in NASCAR from 1986-1995, and the cars were green, with Quaker State sponsorship, the entire time. None of their drivers were ever killed or even seriously injured, luckily.

Brett Bodine, who drove that car, is currently the pace car driver for NASCAR. He retired from racing midway through 2003.

I realize they were filled with errors & variations and (for the most part) were way overproduced... but I'm a big fan of early 90's Pro Set products.

Nice sampling of the sets! Nelson....long hair and all..

This was a pack that came in what was called the Pro Set Gazette, which was a magazine that overviewed some of the going's on with Pro Set in how it related to its card releases. I have the exact same sequence of Pro Set cards from that magazine. The Emmitt Smith was from his rookie year, and could be considered a rookie card. It is a promo card. I remember Beckett making a deal about it when Smith really took off with the Cowboys on how that promo card could be a big deal, but it went the way of Pro Set cards (Re: Rocket Ismail, Santa Claus, Eric Dickerson error, Barry Sanders error, etc.). The other cards in that sampling you have are from the sets released in 1990 and 1991, and are likely the exact cards that came in packs. I don't know if Pro Set put a special serial number on the sample pack cards or not...