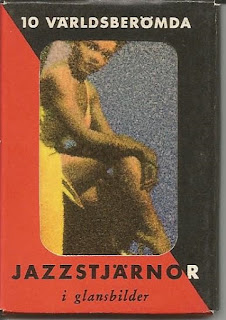 This is a pack of 1958 "Jazzbilder" cards from an unknown Dutch company that were produced in Sweden, according to my research. (*See below for additional research re: 1971 nyfa) The pack itself is a thin cardstock (perhaps like a 3x5 notecard) which is folded in such a way that a tab on the back holds it together. No sealed wax on this one. The front features a striking red and black scheme, the colors divided diagonally from upper left to lower right. The front of the pack features a window showing the top card. Written at the top is "10 V'A'RLDSBER'O'MDA" (Loosely "World-Famous" according to Google). The lower portion of the pack features the words: "JAZZSTJ'A'RNOR" and "i glansbilder." (Meaning "Jazz Stars" and "in glossy pictures," respectively). There are 50 cards in the set, though certain cards (like Turk Murphy) don't seem to exist on any checklists. This indicates there could be more than 50 cards in the set.

The cards measure roughly 1-5/8" x 1-3/4" in size. They feature glossy images of various jazz musicians. The "gloss" to me looks as though the images had been printed on the cards and then were laminated as opposed to having been printed on a glassy material, but I could be wrong there. The cards are printed on what seems to be the same stock as the wrapper, but the gloss finish gives them more rigidity.

Each card features the musician in color (though very poorly printed) in a framed image with a solid color background. Below each picture is the person's name (also poorly printed).

As you can see, some of the cards also feature record label icons. Not all have this.

Below, we have Lena Horne and Jane Christy:

I actually bought six packs of these bundled together. In one of the packs, we actually a VERY nicely printed specimen of Ernestine Anderson: 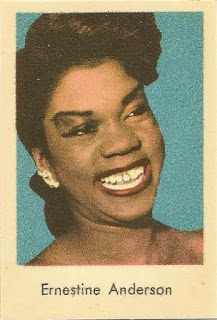 According to my research, there were two different print runs. This would explain the difference shown. Apparently, the first run is the clearer version and the second is the murkier one. At some point, the printings were mixed together in order to create packs.

Further Study:
The opened wrapper contains an icon with the letters "NYFA" and the number 20017 imprinted. After some more research, I believe the original cards may have been produced (back in 1958) for the opening of the Kennedy Center for Performing Arts (then called the Natural Cultural Center). NYFA could stand for "New York Foundation for the Arts." If that is the case, the NYFA was founded in 1971, so these would be reprints. The additional unlisted cards may be ones that were added in for the 1971 NYFA launch (Ex: Pat Boone). That is speculation on my part. I have reached out to the seller for more info/background. I will update this post if/as needed. 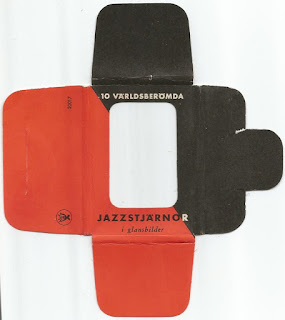 Wow, these are really cool... reprints or not. You pulled some big names there, but my favorite is the Ella Fitzgerald.

I have to believe that "Sara Waughan" is actually the great Sarah Vaughan. This is what she looked like at the time for comparison's sake. https://images.app.goo.gl/f15XSu5E29YbrSeb9

Very cool, thank you for sharing!

Another hall of fame pack break!