Written by jacobmrley at 4:47 PM
In this time of Covid-19 lockdown, I am slightly spoiled in that I have a Walgreens literally across the street from my house.  So any prescriptions I need or milk or bread issues and I can just slap my mask on and walk 50 yards in my pajamas and take care of it with little problem.  I know that a lot of people do not have this luxury.  One of the other wonderful things is that in the last year or so, they started stocking retail baseball cards, something usually only the Targets and Walmarts of the world would do.  I bought way too much 2020 Heritage last month due to this fact and now this afternoon, in need of something to do and comfort not made of chocolate I made the odd choice of buying a 3-pack hanger of Gypsy Queen.  I see GQ as ugly (just look at it) and redundant (we have the far superior Allen and Ginter) but dammit if I don't buy some every once in a while, usually much to my chagrin.  But desperate times call for desperate measures, so here we are.  I will spare you three packs of this stuff - and the magical exclusive green parallels - and just pick one and do it.

The design is just a riff on the last few years designs and for the decade or so of its existence it has rarely strayed from the turn of the century (as in 20th) kind of psuedo-nostalgic old-timey saloon poster graphics. Sometimes it works well and sometimes it's awful.  This time it is just...fine.  There is one terrible part that I will harp on in a moment, but overall it looks like Gypsy Queen and let's just leave it at that. 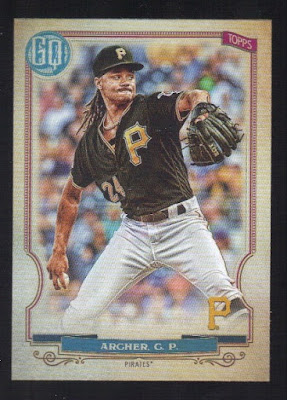 #254 Chris Archer - Pirates.  Archer epitomizes the so-underrated-he's-overrated kind of pitcher.  He's pretty damn good at times and has made a couple all star teams off of that reputation.  But in between he has also led the league in losses and has a completely average 103 ERA+. 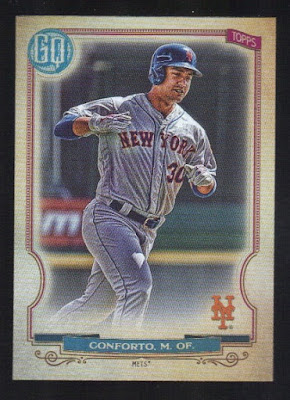 #24 Michael Conforto - Mets.  Hey! A Mets card, that makes any pack worthwhile, though in a moment this pack is gonna get a whole lot more interesting. 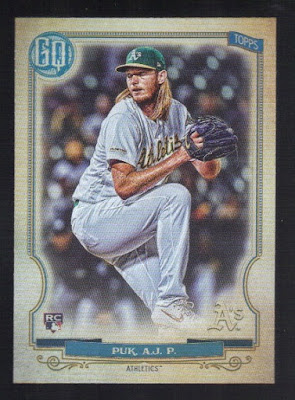 #113 A.J. Puk - Athletics.  Here's the major problem with the design of this set - the line with the name and position is just a mess.  PUK, A.J. P. looks like something Elon Musk would name his kid.  I thought Chris Archer's name was C. P. when I first looked at it and you could easily mistake Michael Conforto's name for MOF.  A simple font size or color difference here or a little more spacing would have taken anyone paying attention for five seconds that same amount of time to fix. 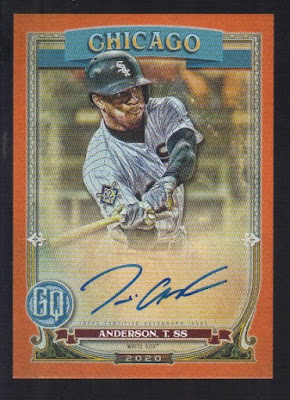 #134 Tim Anderson - White Sox. Jackie Robinson Variation Autograph 16/99.  Well, jackpot! I never get hits in retail packs and here we have a numbered autograph variation, a 1:4484 pack on-card beauty.  I really wish I collected Anderson or White Sox cards but right now that's besides the point.  That's a pretty card and I have been staring at it like a goon while I write this astounded that I actually plucked something nice out of a pack from a Walgreens. 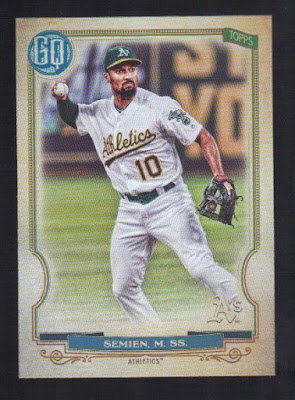 #212 Marcus Semien - Athletics.  Sorry, Marc.  You're a huge letdown after that autographed card.  Even though you've saved my fantasy team the last couple years when my starting SS got hurt, I can't even bring myself to make a childish joke about your last name after that Anderson card. 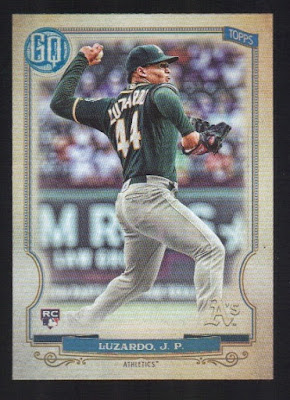 #287 Jesus Luzardo - Athletics RC.  This was a real A's superpack, huh?  I mean, except for the low numbered autograph of the White Sox player.  With a moment to catch my breath, I can say that Jesus Luzardo is a magnificent name. If I were to start a tribute band for Green Lizard and The Jesus and Mary Chain, in a million tries I couldn't think of a better name than Jesus Luzardo.  Then we'd become big and he'd become a star and we'd have to change our name to Mary Jelly.  Oh well.

This was exactly the distraction I needed this afternoon and I hope it was for you as well.  Stay safe and sane everybody!

where do they stock the cards?

Nice. A's hot pack! The autograph is cool too.

I agree the first initial/position placing is too close together. When I reviewed a pack I had SS Alberto Mondesi's card. I'll let you figure out what that looked like!

@Shane they have had the hanger boxes by the toy section

Very pleased with the A's in that pack!