1993 Columbia Tristar A League of Their Own 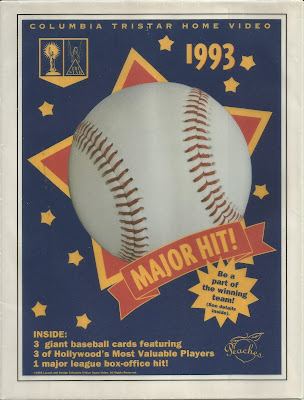 This is a rice paper wrapper for a three-card set promoting the VHS (er, and other formats) release of "A League of Their Own." The wrapper measures 8.5" x 11.5" (roughly). It features the "Columbia Tristar Hone Video" text along the top. On the top left is the combo logo for Columbia-Tristar and in the upper right is the date, 1993. Prominently featured in the center is a full color baseball with a clip art star behind it. The words, "Major hit" appear in a banner at the bottom of the baseball. The lower third of the wrapper features the following text: "Inside: 3 giant baseball cards featuring 3 of Hollywood's Most Valuable Players 1 major league box-office hit!" There is also a logo for the Racine Peaches ballclub. The whole wrapper features a navy blue background with a white border.

Inside, we find 3 over-sized cards. The cards measure roughly 8-5/16" x 11" in size. Each card features one of the "lead" actors from the movie. The star's face is displayed coming through a star border takes up the majority of the card face. The upper left corner features the AAGPBL logo. The actor's name appears below the photo in a banner. The position the player portrayed played in the movie is shown at the bottom of the front of the card.

First up, we have Geena Davis: 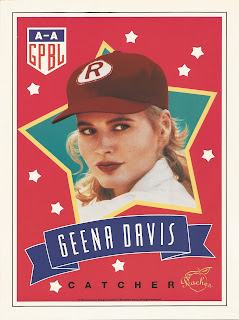 The card backs feature career info about the person portrayed along with the character's name. Each card features three still from the movie. There are also quotes about how great the movie is plus a list of formats upon which the movie can be viewed. 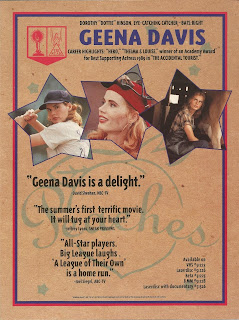 Next up is Madonna. Each person has a different color background for the face of their card. That's a nice touch. 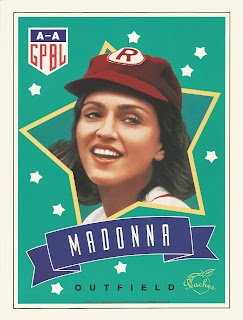 The card lists a couple movies as her "Career Highlights." I mean, okay, this is a movie promo card, but come on. Madonna's career highlight at the time was being freaking Madonna. I guess that's not something you can put on the back of a card. 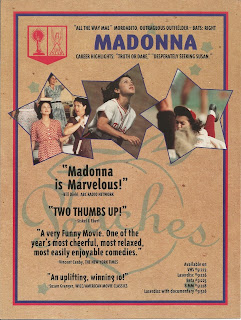 The last card features Tom Hanks. His credits do not yet include "Forrest Gump," as that movie was still a year or so away. 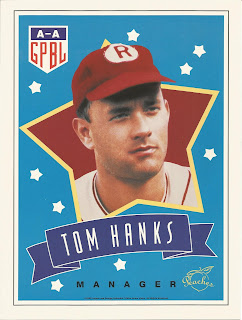 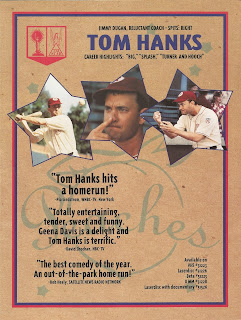 The wrapper says to "Be a part of a winning team. Details inside," but I had no details of any such membership.

I paid $15 for the set. I only bring this up because I have seen individual cards listed for twice that each. Man, this hobby is weird.

Email ThisBlogThis!Share to TwitterShare to FacebookShare to Pinterest
Labels: 1993 Columbia Tristar A League of Their Own

Awesome set. I'd love to own a set... but sounds like they're way too expensive for my taste.

I have one of these. I worked in something called a "video store" in my small college town in the mid-90s.

This pack was a promotional premium sent by the studio to encourage video stores to purchase multiple copies of the movie for rental, including Blockbuster, Hollywood Video, and on down to your local mom-n-pop shop.

Back then, each videocassette was priced at $80-$100 each, including discounts for multiple copies. Videocassettes were not that commonly sold at retail for under $30 yet.

Especially mom-n-pop video stores like the one I worked at made educated guesses for a certain number of cassettes to have available to rent. The goal was to make up the expensive up-front cost back at three bucks per night while the video was still a new(ish) release.

The studio or videocassette distributor (like Ingram) would send out promotional items to get store owners to order one or more copies. For example, when the Michael Douglas white rage freakout "Falling Down" came out, the studio sent out movie-themed plastic pocket protectors as a promo item to video stores.

I remember for "A League of Their Own", the store received standard movie posters, this oversized pack of cards (which could be used to decorate the store as mini-posters), and two or three ball-point pens shaped like little baseball bats with the movie name/logo printed on them.

Customers used to sign a rental receipt/contract with the pens, so they were probably the most convenient, long-lasting, and useful part of the promotion. Though the printing on the pens was easy to rub off for some reason.

They don't seem to be too expensive today. Just doing a quick search on eBay right now shows the full set, wrapper, and an unopened pack of three pens for $30 OBO.