Written by --David at 6:00 AM
The 1959 Nu-Card Rock and Roll set comes in packs of three cards in a clear cello wrapper. The buyer can see two of the three cards because one of the cards in flipped inside the package. The set consists of 64 cards which are 3-1/2” by 5-1/2” in size. Each card features a Rock and Roll star or group in black and white. The lower portion of the card lists the card number, featured artist's name and birthday information.

First up in this pack, we have Frankie Avalon: 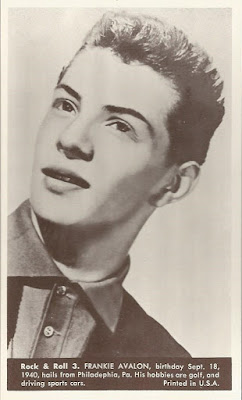 The card in the middle of the pack, and thus the only one not seen before opening it, is a card of The Fleetwoods: 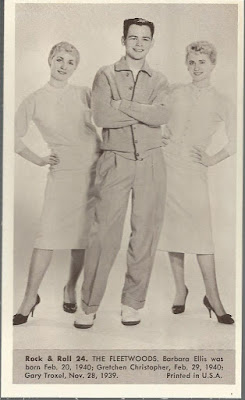 The third card, which was flipped around so we could see who it was while look at the cello pack, is Johnny Mathis: 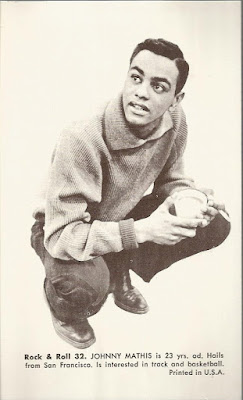 These were produced in 1959, making most of the singers in this pack all of 19 years old! Mathis was just 23. That is awesome to see these folks when they were so young and just starting out in their careers.

Very cool. I discovered this set last year while looking for a trading card of Andy Williams (my mom liked him a lot). It's absolutely loaded.

I would like to build this set. I have one card so far. Bobby Darin