2019 Wizards of the Coast Transformers - War for Cybertron: Siege I TCG Booster Pack

Written by Jafronius at 3:17 PM
Greetings!

Hope everyone is doing well.  It was announced yesterday that Wizards of the Coast is ending the Transformers Trading Card Game.  The fifth release, released back at the end of May, is the last one (I have yet to see the latest release at Target, and Walmart hasn't had Transformers cards in a long time).  It's quite unfortunate since I enjoyed the artwork on the character cards, but if not enough folks buy it...well, you know.

To mark this sad occasion I went to locate a pack of the second release, but it's still packed away from the move.  I did find a pack of the third release, so I'm going with that: 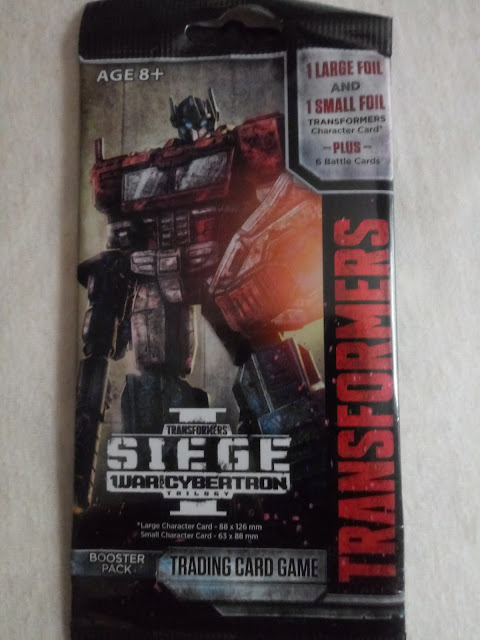 War for Cybertron: Siege I was released back on June 28, 2019.  The gimmick they had for this release was the inclusion of mini-Transformers called Micro Masters (smaller robots), and Battle Masters (weapons for the Transformers).  Because there was a mini-Transformer, you now got 2 Transformers in a pack, the regular large character card and the "small" character card, which was the same size as the battle cards.  You now get 6 battle cards in the pack instead of 7.

Again, the battle cards are sized like regular baseball cards and are wrapped in clear plastic.  The 2 character cards are not in plastic and are protected by 2 pieces of cardboard.  This time they put ads on the cardboard: 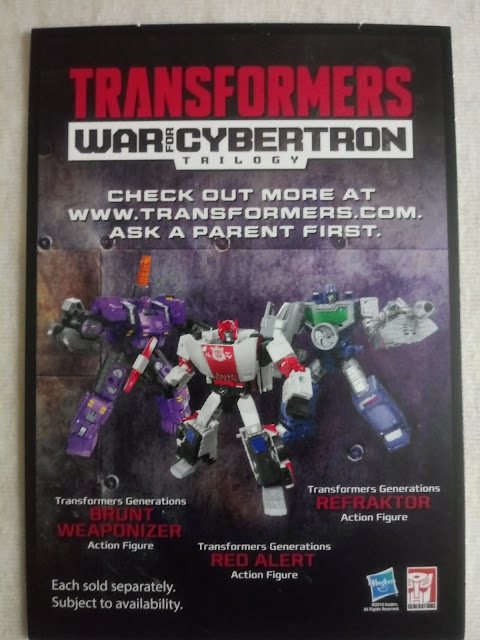 Hasbro owns Wizards, so hey, might as well sell some toys. 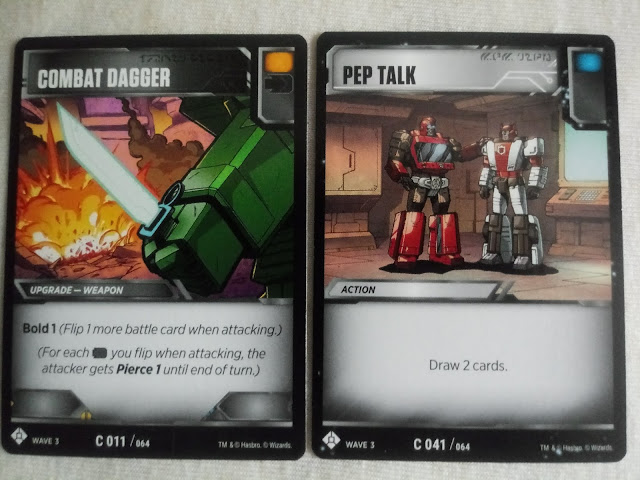 Once again you start with the commons.  You can see which release the card is from in the lower left.  The colored pips in the upper right is still being used to add to a Transformer's attack or defense, but I believe they started adding more colors with this release.  There are several YouTube videos out there on how to play the game, if you wind up picking up a bunch of cards for cheap. 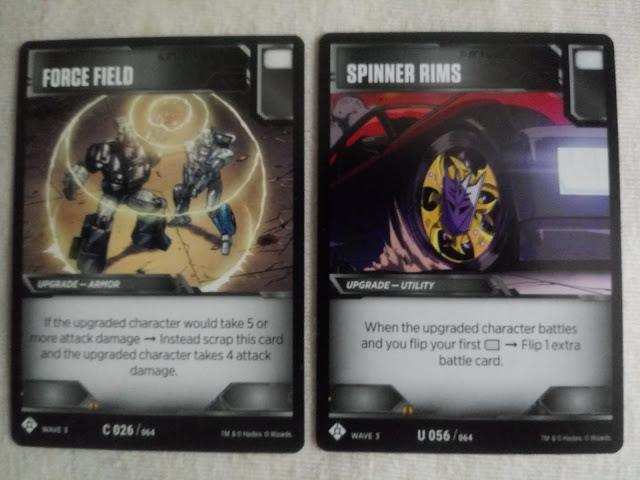 Only 3 commons per pack in this release.  2 uncommons and 1 rare coming up. 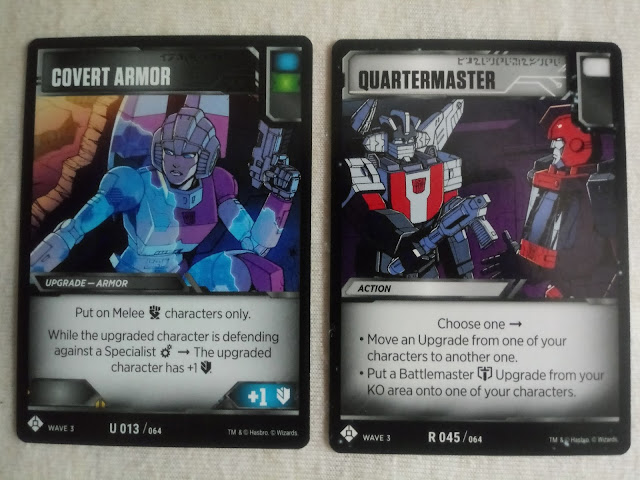 Quartermaster is the rare battle card.  I thought I saw it used a lot in several decks so it should be useful.

The small character card is in-between the battle pack and the large card: 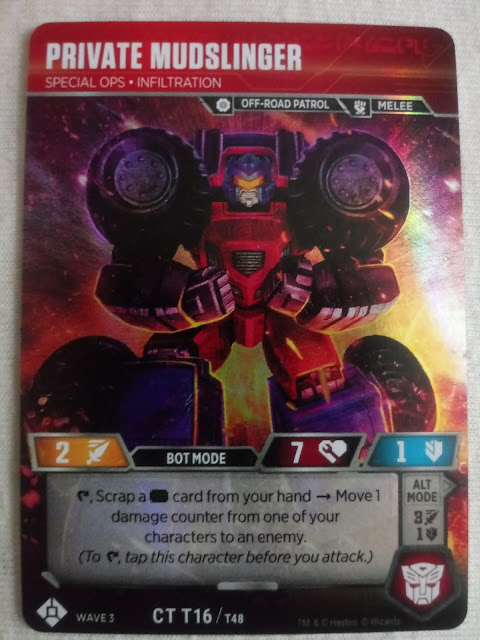 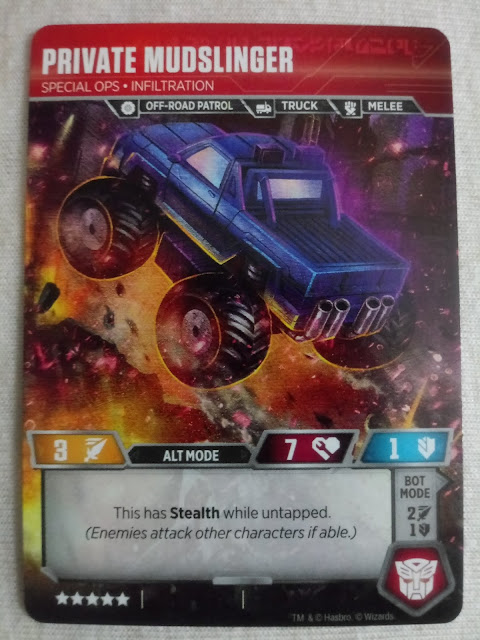 Because it's a war, the Transformers are assigned various ranks.  Mudslinger is a Micro Master...not real useful in battle but they all have different abilities to interfere with card flips or add or subtract damage to the final totals.

Mudslinger is a common and the robot side is foil.  I remember him from the Off Road Patrol release back in the late 80s so that's cool.

The Battle Master cards have a robot and a weapon mode.  They start play in robot mode and transform to weapon mode if they're knocked out of the game (run out of health, the number in the red square).  The Transformer can then use the weapon to enhance their attack. 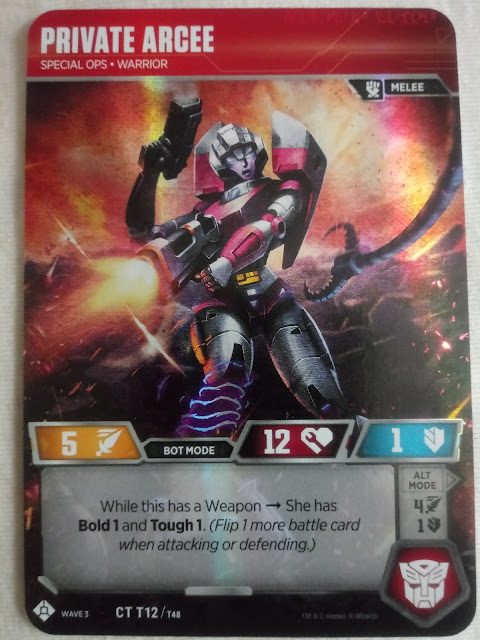 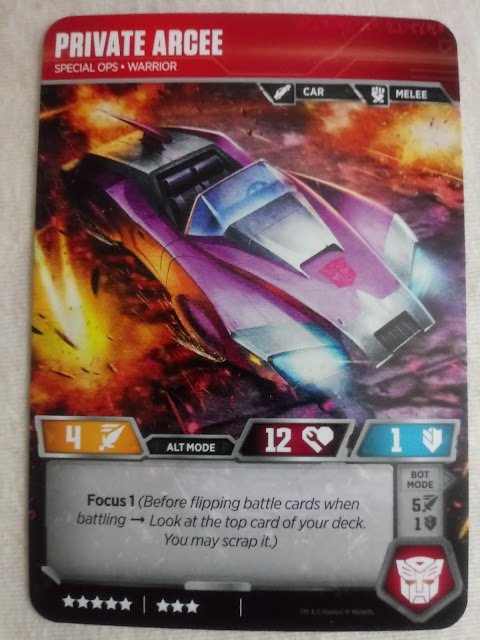 Arcee is also a common and the robot mode looks real nice all foiled up.

Anyway, that's the pack.  I'm still not a big fan of mixed teams battling each other (many decks still have both Autobots and Decepticons), and the military designations are silly, but I still bought the packs because of the artwork and because it's Transformers.  Sorry to see it's cancellation.

Have a good week everyone, and thanks for reading!

Email ThisBlogThis!Share to TwitterShare to FacebookShare to Pinterest
Labels: 2019 Wizards of the Coast Transformers - War for Cybertron: Siege I TCG Booster Pack

Even though I've never really been into CCG's for the gameplay... I've always enjoyed collecting them for their artwork. Sorry to hear they're discontinuing this line. Maybe they'll be enough people to complain and they'll bring it back eventually.

I haven't bought any packs in awhile and I gave up trying to scan and catalog all the cards, but dang I hate that the line is ending.