Written by SumoMenkoMan at 2:55 PM
In the late 1970s and early 1980s in Japan, Mini Cards ruled the world as far as trading cards were concerned.  Hundreds of different Mini Card sets were being cranked out by a good half dozen different companies.  Video games ultimately killed card collecting off in the early 1980s in Japan, but not before Amada capitalized on the popularity of the Nintendo Entertainment System (NES).  Issued in 6 series of 60 cards each, this 360-card set from 1985 captured screen shots and graphic drawings of NES games.  These three-card, Series 5 packs were wrapped in a paper envelope with the Amada seal and name imprinted on it.  They came 60-100 packs per box...winner cards were included and if you won, the prize was usually a small prize box of cards that contained anywhere between 4-10 cards depending on the level of prize. 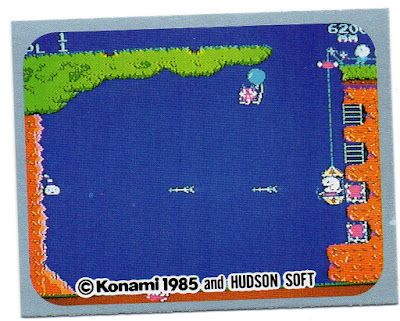 Up first is a screen shot from a game called Pooyan, card #268.  The premise behind this game is that a bunch of wolves attacked the house were Mama Pig and her piglets (Pooyan) were living.  Now Mama has to use a bow and arrow to fend off the wolves and save her babies. 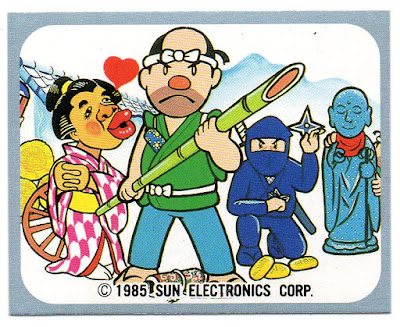 Next out of the pack is the box art card (#295)for a game from Sun Electronics called Farmers Rebellion.  This is a maze game set in medieval Japan and the farmers are planning and uprising.  This two-player game has you running around battling ninjas.  I love the art on this one! 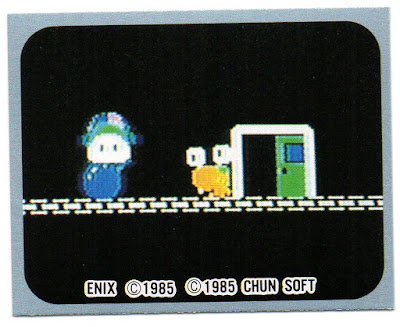 The last one is a screen shot card (#294) from the game Door Door....a puzzle game that has you control a little round animal with a baseball cap.  The object is to avoid the bad creatures by going through doors and climbing ladders.


There you have it.  Anyone ever play any of these games growing up? 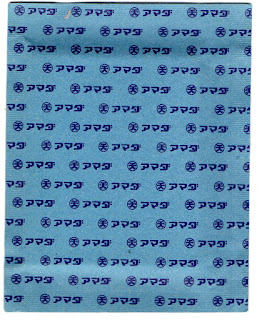 These cards are great!

Awesome! I'd love to play some of these older games. Relive some of my childhood.

I forgot to mention the cards are a little smaller than an American sized baseball card. They are definitely fun to collect.

Thanks! My ultimate goal is to complete the entire 360-card set. Still a work in progress.

Agree with Scott & Colbey... these are awesome!

I put together a book on Mini Cards a few years back to help with PSA grading the 1974 and 1976 Yamakatsu Pro Wrestling sets that have Andre the Giant's rookie card. While doing that, I threw in a bunch of sets I had catalogued up to that point. It definitely left something to be desired, but one of my goals has to return to collecting Mini Cards and getting a more comprehensive 2nd Edition out there. This set was definitely a cornerstone of that boom.