Yesterday I decided to head to the Target by my office on lunch.  I'd resisted the urge for a couple of days to see if I could find any of the Heritage packs but I could no longer.  I've seen pack searchers in there before so I never have anticipation of finding a hit in any packs that I buy, and expectations are always low. 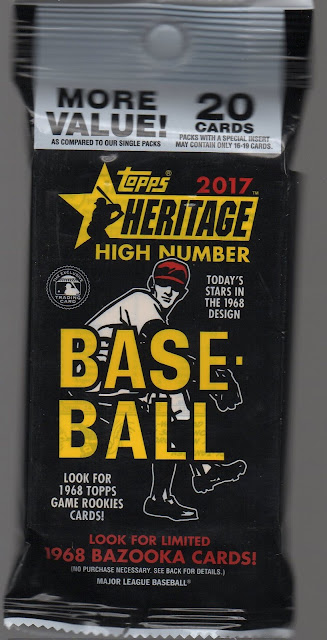 I like the concept of just adding to the Heritage set released earlier.  What I'd like even more is a legitimately old-school six or seven series set.  I'm allowed to dream.


You don't see it on the back of this card, but I do like how many of the backs reference the 2017 season.


This Josh Reddick is a short print.  I'm not sure if there is one per pack, but there was one in mine.  I was with a friend that bought two packs and there was a short print in each of his.

For those unaware, the codes on the back will tell you if the card is a short print.  Per Beckett, these are the codes (look at the last two numbers of the number on the last line of the card):


Per Beckett the 1968 Game Rookies cards are exclusive to packs from Target.  I'm sure the red back is no coincidence.

The Mariners in that pack sure are a dud. Smyly has been injured the whole season and Boog Powell was traded back in August. I can't blame Topps for not having time to replace Powell.

The backdrop on Mike Pelfrey's card sure is a strange one. It's more suitable for Swamp Thing than a baseball player.