1994 Skybox Star Trek: The Next Generation The Episode Collection - Season One

Written by Jafronius at 7:00 PM

Hope everyone is doing well.  Thirty years ago this week, this show premiered:


Because The Next Generation was in syndication, the premiere date varied, depending on where you lived...but 30 years ago on the week of September 28th, the second live action entry in the Star Trek universe debuted, starting a successful 7 year run and spawning three more Star Trek series, as well as kick-starting the syndicated television show market.

The premiere episode, "Encounter At Farpoint", aired as a two-hour TV movie.  My father recorded the episode thinking it was a new Star Trek movie.  He later said that he wouldn't have recorded it if he knew it was just a TV show.  I didn't watch the show at first; I watched the episode later (maybe during Christmas break), and got hooked.  The Next Generation became my show, since until that point I had only seen a few Star Trek episodes here and there.

Back in 1994, Skybox began releasing sets commemorating each season of The Next Generation. We've already seen Season 5.  For the 30th anniversary, here's a pack of 1994 Skybox Star Trek: The Next Generation The Episode Collection - Season One!
8 cards come in a pack, 108 cards in the set.  Here they are, in numerical order: 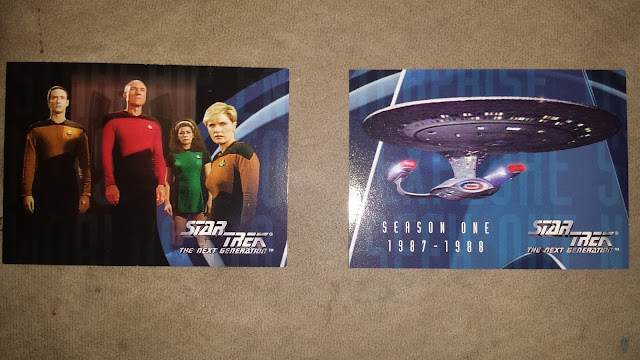 I purposely reversed the order of these two to show the image.  The first 9 cards of each season set
formed an image; in this case, it's the comm badge used for The Next Generation.  The text you can
barely see should be the famous Star Trek intro ("Space...The Final Frontier....").

Each set also had a 9-card subset, also forming an image, focused on a crew member.  Captain Picard
and Data were the focus for Season 1. 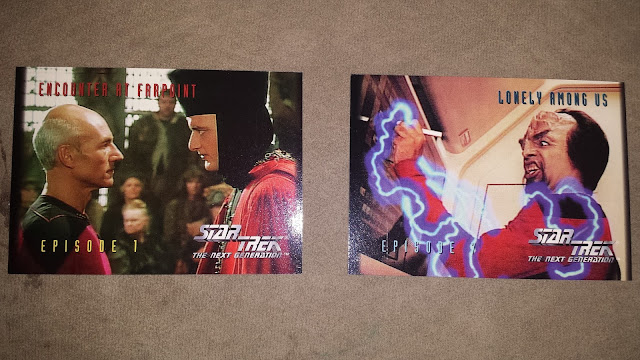 Each episode gets 3 cards in the set so two-parters get 6.  This allows for a more comprehensive
review and more images from the episode. 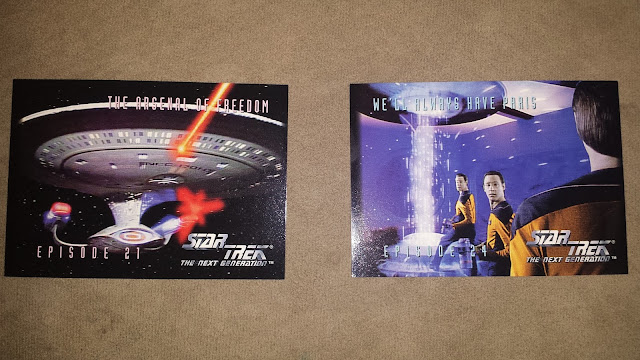 The numbering did not reset for the next set, so Season 2 starts with card #109. 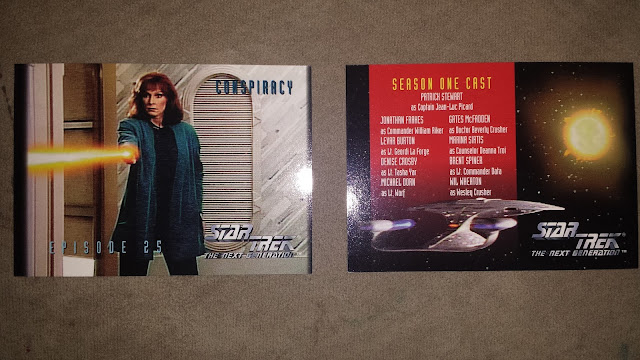 Skybox did go on to make sets for Deep Space Nine and Voyager, but they did not follow this Episode Collection format.  I wish they did. 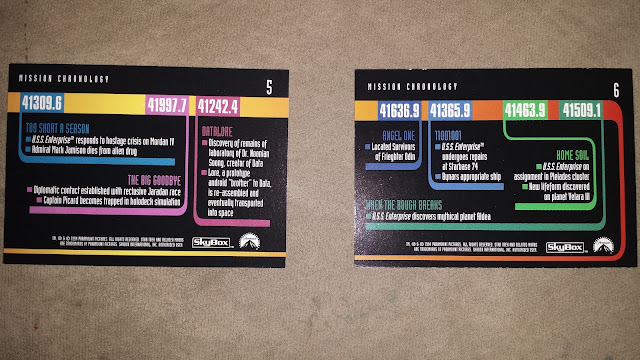 Here are the backs for the Mission Chronology cards.  Not only do you get a nice image in the front, but you get a pretty cool timeline on the back with a quick recap of the season's episodes.

Here are the rest of the backs: 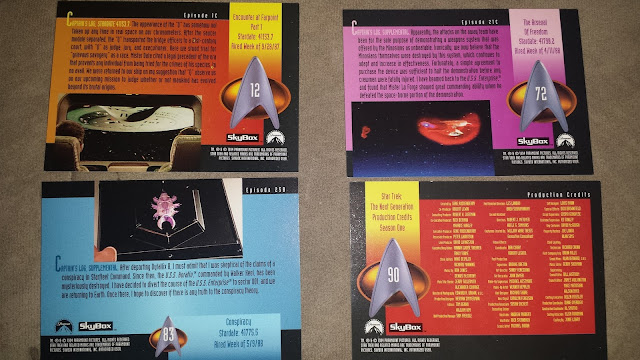 Anyway, that's the pack.  It was sets like these that caused me to ease up on the baseball and basketball card purchases during my college years.  I have all 7 sets in a binder and they still look great after all these years.

Happy birthday Next Generation...thank you for the many years of entertainment and influence.  Thanks for reading!

Email ThisBlogThis!Share to TwitterShare to FacebookShare to Pinterest
Labels: 1994 Skybox Star Trek: The Next Generation The Episode Collection - Season One

A great pack and a great show. Thanks for sharing!