Written by Kin at 5:39 PM
It's not always easy to find hockey cards in Texas and finding some O-Pee-Chees at retail has been tougher than I anticipated.  I love Texas for so many reasons but this is certainly a shortcoming.

I had stopped at various Targets and Walmarts at least a half dozen times before finding anything.  I found an unopened box, but it wasn't a blaster.  I asked a cashier to do a price check, thinking it would come back "item not found" and it did.  She opened it up, tried again and success.  Normally I wouldn't buy normal packs but since they were out of a previously unopened box, I snagged a couple.  Since then I've looked for more and haven't found any.  Anywhere. 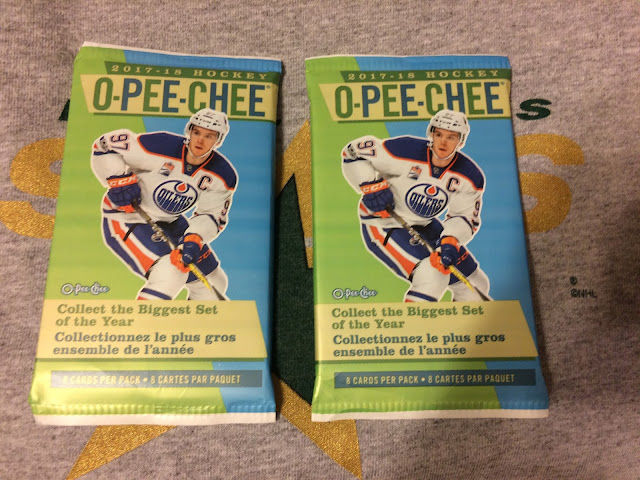 When set images were released months ago, I felt the design was the best in years and was excited.  When I opened my first pack and looked, I wasn't as thrilled.  I don't know why.  After a few days and another look I am again on-board.

The backs are typical and what I expect from O-Pee-Chee.  What I would like to see is no dead space.  It would be great to fill the space with bios or cartoons, like in the "old days."


I don't see much of a difference on the Retro backs.  Either make them much more discernible or just leave them the same.