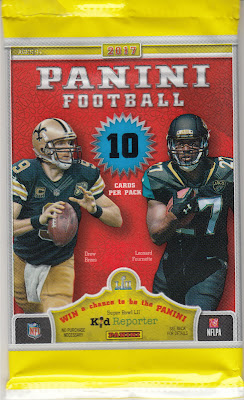 Intermission is over!  The 3rd quarter of the 2017 NFL retail packs exhibition is ready to begin.  Next up is 2017 Panini Football.  This one gives us double cover-boys on the package, representing both the old guard (Drew Brees) and the new era of players (Leonard Fournette).  There are ten cards in each pack, and I think this was $3/pack, also.  This set features a checklist of 200 players in the base set, with the first 100 being veterans and the second 100 being rookies. 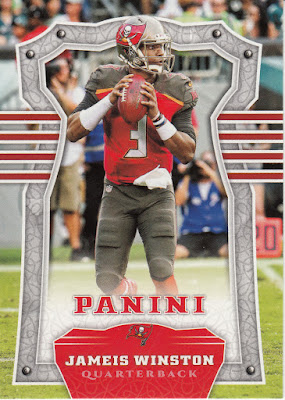 This is a clear example of the design of this set.  Instead of a border, Panini decided to feature a "keyhole" overlay on this set, which I believe they intended to represent armor.  In contrast to the 2017 Score set, this requires all of the player photos to be VERY narrow in order to fit in the keyhole.  You will see most of these players are shown standing or are running in a very upright manner.  This makes the cards very BORING...no action shots, flying tackles, diving catches, or passes being defended.  Instead you get guys waiting for the snap, surveying the field, and posing for the camera.  The design really pigeonholed (pun somewhat intended) the photo selector into using a certain kind of shot.  Team colors are used on the horizontal stripes as an accent (which I like). 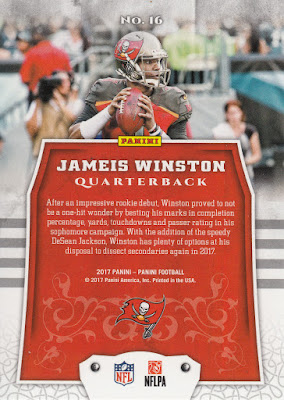 The backs feature a cropped version of the front photo, a brief write-up, and a team logo.  There are no stats anywhere to be seen. 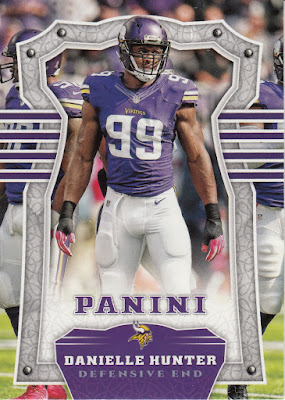 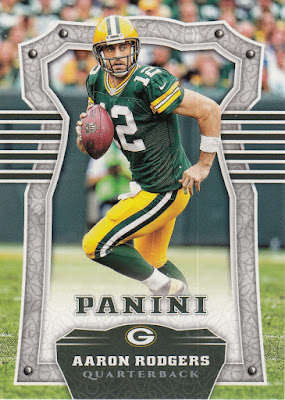 #109 - Dalvin Cook - The rookies have the keyhole inverted, compared to the veterans.  Dalvin Cook is one of the better names to get in the rookies checklist.  He is the all-time rushing leader at Florida State (breaking Warrick Dunn's record in only three seasons), and was drafted in the 2nd round by the Vikings.  He had a good Week 1 performance with 127 yards in his NFL debut. 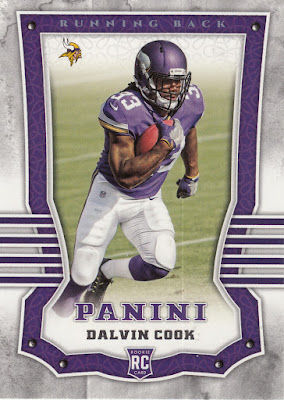 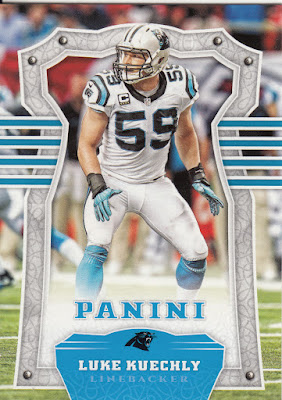 #54 - Brandon Marshall - "Shining Armor" parallel.  At least I think that's what this is.  It's shiny in-person (less so on the scan) and is not serial-numbered. 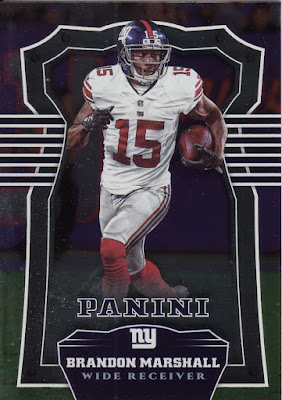 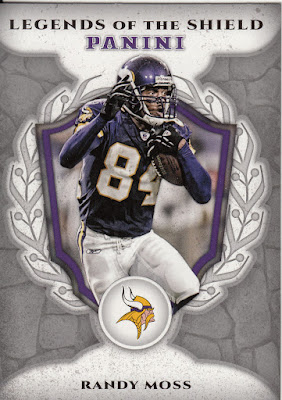 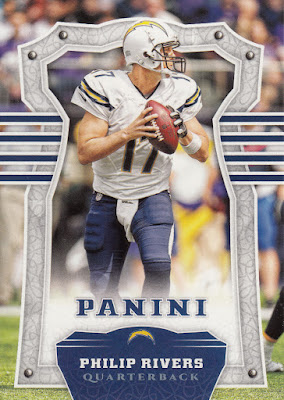 #167 - Mack Hollins - He is a wide receiver from North Carolina, who played on the same high school team as Cardale Jones.  Mack was drafted in the 4th round by the Eagles and made the roster, but is stuck behind Torrey Smith,  Alshon Jeffrey, and Nelson Agholor on the depth chart.  He did not have a catch in Week 1. 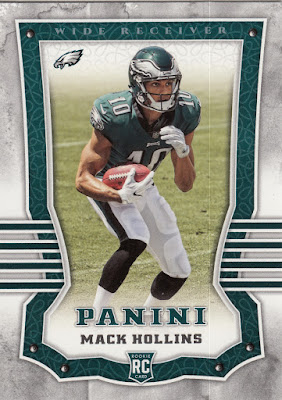 #79 - Justin Tucker -- The final card is a kicker (which I love to see in the checklist of any set).  However, the keyhole design restricts it to just a photo of him watching a ball in flight.  I can hardly imagine a less-interesting card for him. 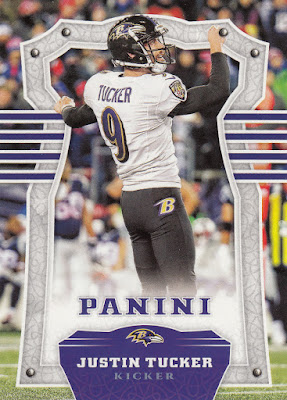 Thanks for putting up with all my whining.  If you've read all the way to the end of this, you may have noticed that one of the pictured cards is not actually in this set.  Did you figure out who?  Tell us in the comments!  If not, scroll down for the answer.  Thanks for reading!

Answer:  There is not really a guy named "Mack Hollins."  I totally made that up.

Wow. Not a football guy, but that design is awful. Way too much going on.

What? Why they inserting a S.H.I.E.L.D. card? OH it fits in the whole Knight's armor thing that the Panini brand has sort of had since it's inception.

Those are among the ugliest cards that I have ever laid eyes on.

I actually saw this Hollins guy catch a couple of passes today. Not a great result today for the Eagles, though, unfortunately.

UGLY...that said I'll still take that Kuechly off your hands!