Written by Punchy Sam at 2:44 PM
Being a big baseball fan (but not into basketball, football, or much hockey) means that I have a big void between the months of October and April. This void ends up getting filled by pro wrestling.

I thought I'd try out some of this year's WWE Heritage. The retail product comes in blaster boxes (one relic/box but no shot at autos) and rack packs, with a shot at relics and autos. Here is a rack pack.

Here are a few legends...Windham was an NWA Champion, Muraco an ECW Champion (Before it was "Extreme"), and Hacksaw won the first ever Royal Rumble. 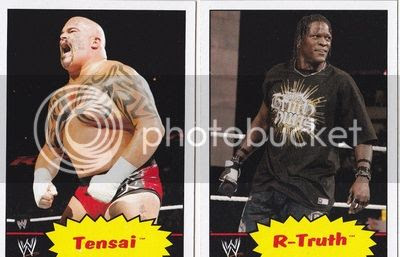 Here are a couple of today's stars...albeit today's over-the-hill stars. We have Tensai (best known as Albert, soon to be known as unemployed) and R-Truth (also known as K-Kwik and Ron Killings). 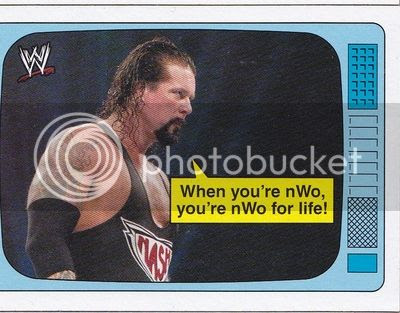 Here is Kevin Nash in a "Superstars Speak" insert. These cards aren't poorly centered... I am just terrible at scanning.

Four more legends! Kamala wrestled the Undertaker in the first televised casket match. Volkoff and Animal are both former Tag-Team champs and WWE Hall of Famers. The British Bulldog (Davey Boy Smith) was one of the greatest wrestlers ever to lace up the boots and not win "the big one". 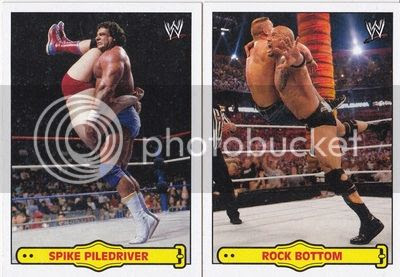 Pictured here are the finishing maneuvers of the original "Rock" (Don Muraco) and the most famous "Rock" (Dwayne Johnson). 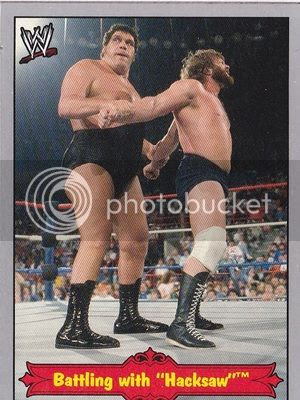 This is a cool set! I hope to break a hobby box at some point.

I have a Nikolai Volkoff "thumb wrestler" that came in a set with Hulk Hogan (circa 1986). It was always fun to put a smackdown on the "commie."

I'm very close to finishing the base set so if you need a trading partner let me know. I'm also working on the inserts and have doubles of those to trade.

Thanks for the comments guys!