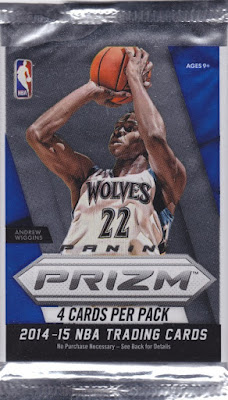 Panini Prizm is all the rage these days in basketball cards. Star player rookie cards and their various parallel versions are going for outrageous prices, so the packs themselves can be difficult to find. I happened upon an older Prizm pack recently (repack? I think?) and saw that one from 2014-15 hadn't been posted here yet. 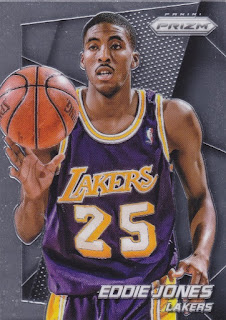 189 - Eddie Jones - Like many of their other sets, Panini pads these with retired players, and not always obvious names like Eddie Jones. 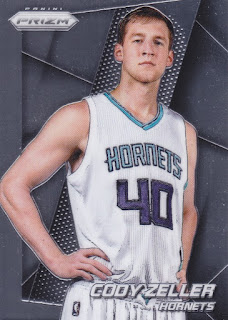 139 - Cody Zeller - One of the tall Zeller brothers. I think this was the first season of Charlotte's rebranding as the Hornets, the namesake of their old franchise that moved to New Orleans.

28 - P.J. Hairston Rookie Autographs Prizm (250/499) - Hey, this is interesting. I'm never all that excited about sticker autographs, though, but it's better than nothing. Some Charlotte fan would have been pretty pleased with this pack. I'm more of a Blazers guy, though. 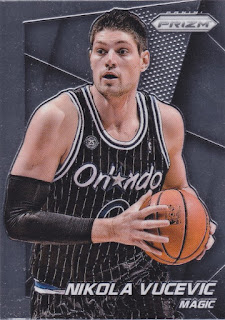 60 - Nikola Vucevic - Vucevic is still one of Orlando's top players. He's wearing a '90s throwback jersey on this one. 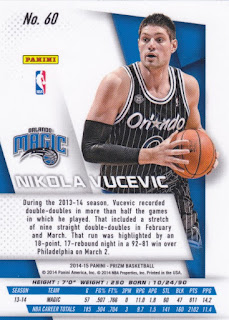 Here's a look at the back!

Eddie Jones was my favorite player back in the day. He was sort of a placeholder between Byron Scott and Kobe. Glad to see him featured in newer products, although I gotta admit... I'm a bit surprised to see his name on the checklist.