Featured in this post is a pack of 1994-1995 Upper Deck Parkhurst Parkies Tall Boys (1964-65). There are ten cards in each pack. The wrapper is bright yellow with a very vintage/retro graphic of the "Parkies" logo and two hockey players on the front. The back of the wrapper features copyright information and odds of pulling inserts. The inserts include: American Greats, Autographs, and Future Stars. The set has 180 cards.

Each card is definitely "tall." These things are 2 1/2" x 4 11/16" in size. The front features either a player or a scene. For the cards with players, the players are shown with no background other than a solid color associated with the team. All players of a given team share the same color background. 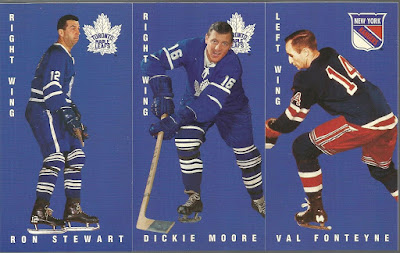 The fronts also list the player's position on the upper left side of the card in a vertical font. The team logo occupies the upper right corner. The player's name is shown at the bottom of the card horizontally. Above pictured are Ron Stewart, Dickie Moore, and Val Fonteyne. 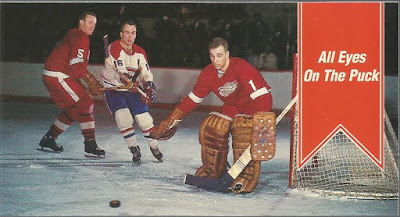 Some of the cards feature a scene instead of a single player. Above is the "All Eyes on the Puck" card. Frankly, the people shown look like EA Sports NHL Hockey renditions. It's a very weird rendering. Shown in the picture are Roger Crozier (goalie), Henri Richard (Canadiens) and Doug Barkley (Red Wings).

Below, we see Bruce MacGregor: 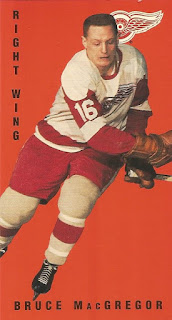 This pack also features a "Scoring Leader" card, which was not listed as an insert, so I assume these are provided for each team. The player is shown "skating" on an NHL puck: 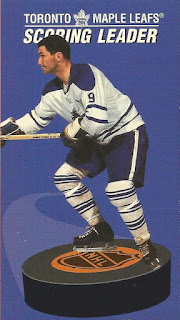 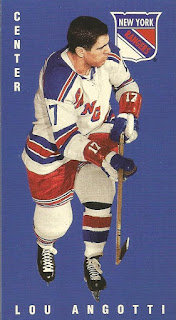 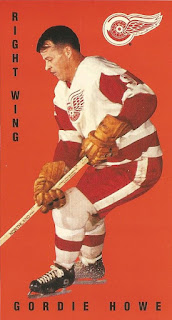 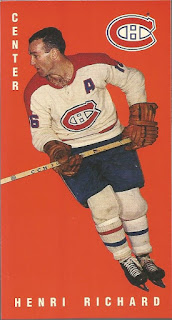 Crozier makes another appearance on a horizontal scene card. This time, it's "Crozier Makes the Stretch:" 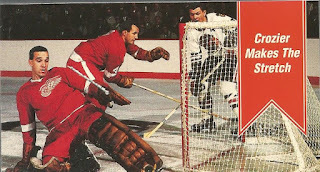 The backs feature player bio info along with team information and a write-up about the player's career during the 1963-64 season. The text is also present in French: 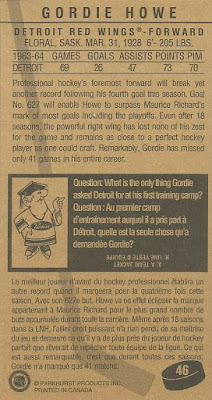 The bottom of the back shows NHL logo, copyright info, and the card number in a hockey puck.

Didn't buy any of this stuff back in the day... but I sure wish I had. It's a great looking product.

The throwback Parkhurst sets from the nineties are great. There was another missing link set released I believe a year before these Parkies.

I also like the Summit Series cards made during the early nineties. They are junk wax and totally worthless, but I like the history these sets document.