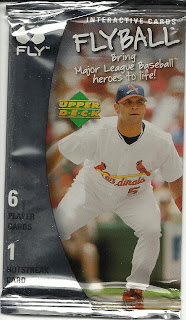 In 2005, Leapfrog came up with an interactive pen. Well, actually, version 1.0 came out before that, but the version that goes with these cards is the v2, which Leapfrog stopped making in 2009. Why the history lesson? Because the Flyball card set was both ahead of its time and one of the craziest oddball ideas since talking baseball cards.

The Fly Interactive Pen allowed the user to insert a small cartridge into a "pentop computer." The pen had a computer in it that would use the information from the cartridge and whatever compatible paper products to play games, create sounds, etc.

In 2005, Leapfrog teamed up with Upper Deck to create a 200-card* set that worked with the pen computer to allow collectors to play a baseball game through the device.  The base set was sold in a large shelf box and included about 30 cards, the cartridge, instructions and a poster. I'm sure there were some other things in the box. I used to have the box, but a quick look around the man cave shows it gone. I must have tossed it out.

In addition to the cards that came with the game, you could buy twin-packs of cards in "Expansion" blister packs.  And, after my lengthy introduction to the set, I present one such pack today. Each pack has 6 player cards and 1 hot streak card.

The Hot Streak cards allowed for special plays, defensive strategy, and they added a certain amount of random mayhem to the game - kinda like a real game. Haha! 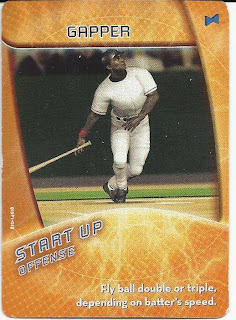 The fronts of the cards resembled the regular UD issue for 2005, but had enough difference that when one sees a Flyball card among the standard ones, it makes one pause for a moment. That pause would be long enough to see the "Flyball logo, mainly. 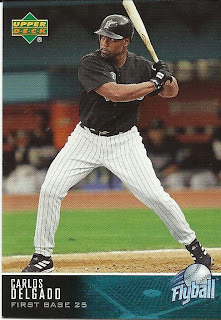 The backs feature a smorgasbord of information. A small inset photo, the team logo, player name and bio, and the 3-yr averages for that player adorn the top 1/3 or so of the card. The bulk of the back is filled with the playing area. Users would touch the pen to the various items on the card in order to play the game. The bottom of the card features copyright info and appropriate logos. 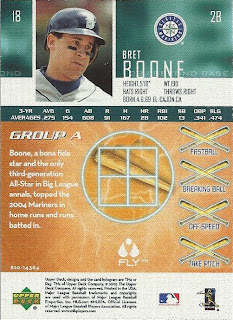 Each player was sectioned into one of three groups: Group A, Group B, and Group C. I don't recall how/why the players were grouped. Carlos Lee was in Group A: 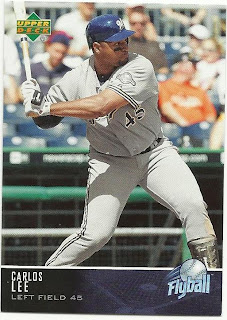 The cards feature borderless photos that actually very well made. The images take up the bulk of the front, and there is a small banner that runs along the bottom. The banner shows the player's name, position, and uniform number. Each card's banner is done in a color representing the team shown. The background of the banner shows a baseball diamond taken from some stadium. I'm sure someone could name the place. 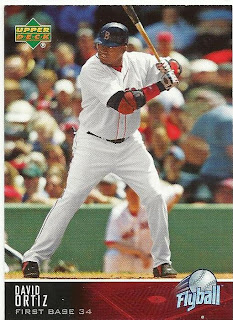 Both David Ortiz (above) and Rafael Palmeiro (below) hung out in the Group B crowd. See? I have no idea how these guys were mixed and matched into their respective groups. 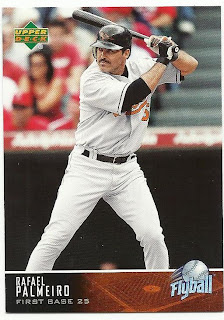 Oliver Perez is the lone Group C candidate from this pack: 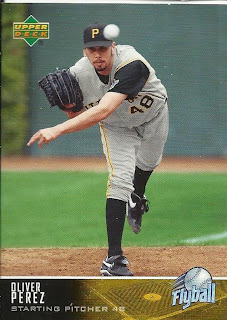 I think I played the game once. I have almost a full set of the 210 cards plus the Hot Streak cards. One of these days, I cull together the "needs list" and post them on Tribecards.net. In the mean time, enjoy!

*There were actually 210 cards. Cards 201-210 comprised of baseball legends, and are supposedly hard to acquire. I have all of the legends, so it can't be that hard.

Leapfrog was a popular item in our house in 2005. I had no idea that these cards went with the Leapfrog pen.

Cool cards. Kudos to Upper Deck for collaborating with Leap Frog and trying to attract kids to cardboard. Best of luck on completing your set.

Night Owl - We had the wrong pen initially. I found the v2 pen on ebay for basically nothing, so I tried it. Like I said, I think I played just once.

Fuji - Thanks! It's been years in the making.

I bought a bunch of these around 2008-2009 when my local Target was putting red tags on them and dumping them in the clearance end-cappers at the back of the store.

Never got around to trying the game part of it, but I always thought it looked interesting, and as baseball games go, one that possibly would have some promise. It's just too bad the Fly pen came out in the middle of dominance of iPods, and then died as tablets and smart phones took over the portable technology market, even for kids.