Written by Jafronius at 11:57 PM
Greetings!

Hope everyone's doing alright and ready for the weekend.  Got a football pack for you all, just in time for the MLB All-Star Game.  When the vendors reloaded the Target $1.59 discount box a couple of months ago, all sorts of goodies popped up; packs I would never have considered buying when it was regular price.  Now those boxes are essentially back to normal, but I was able to snag a few before they were all bought out.  Here's a pack of 2010 Topps Magic Football! 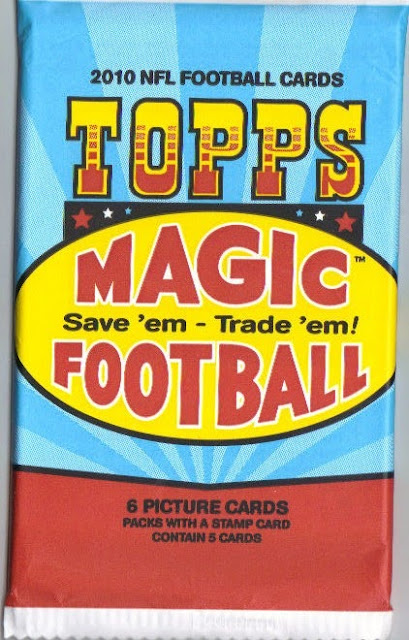 When I saw the 2009 version on this site,  I was hesitant to pick one up.  I don't pay much attention to college football, so getting a bunch of men in college uniforms would not appeal to me.  However, this set has men in NFL uniforms!  It's go time!  Here's what I got:

I apologize for the scanner cutting off the borders again.   The images have a Gypsy Queen look to them, which is also a difference from the 2009 set.

It appears a mini parallel comes in each pack.  The black-bordered mini comes 1 in 8 packs.  There are also short prints in the set, but I don't know what they are and I'm too lazy to hunt a list down.

Here are the backs for the curious ones:

Just like Gypsy Queen, there's no stats on the base cards.  The picture of the town the player plays for is nice, but I'd rather see stats.  Yes, the answer to the trivia question is backwards.  You have to hold it up to a mirror to see it...or you can try to read the answer backwards.  Ooh...magic!

Anyway, that's the pack.  Have a great weekend everyone...thanks for reading!

Love the base card design, but agree... I'd rather see stats, than a photo of the hometown city on the back.