Written by Todd Uncommon at 7:44 PM 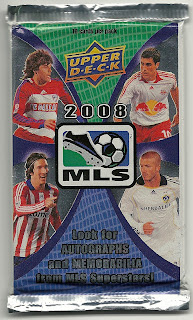 I have a hard time allowing myself to use the phrase "MLS Soccer", because if the acronym gets played out, it's like saying "Major League Soccer Soccer", even though that's basically what the league website address is (www.mlssoccer.com). It feels weird to me, like when somebody says "safe haven" (isn't every haven, by definition, safe?), or when they say they're going to the ATM machine (OK! See you at the machine machine!).

I am a San Jose Earthquakes season ticket holder, and have been since the year of this pack of cards. For more personal details about my relationship with the Quakes, you can check out my so-far-rarely-updated-blog here. For now, on to the cards.

10 cards to a pack, plus mythical promises of autographs and memorabilia cards of players who maybe one out of ten thousand people will recognize (unless the name ends in Beckham, or maybe Donovan).

Once again, a very typical, professionally designed set from Upper Deck that looks absolutely indistinguishable from any set recently before it, or after it, no matter what the sport.  Upper Deck's design aesthetic, to me, is a lot like a male model. Looks nice, well put together, but you can't remember a single remarkable thing about it seconds after you've seen it.

The MLS also is unique among its "big five" pro sports in North America in that corporate jersey sponsorships are prominent, and even expected.  Of course, in a league like the MLS, the jersey sponsors run the full range of business concerns, from janky multilevel-marketing lowlifes (Herbalife, Xango, and even the Earthquakes had (gasp!) Amway for a couple of years) to real companies that do or make real things XBOX 360 (Microsoft), Volkswagen, Quaker, Corona, Barbasol, Amigo Energy).


Good draft for what is now Sporting KC.  Espinoza made 113 appearances for them through 2012, and currently plays for Wigan Athletic in the EPL.


Figures that out of this pack, I pretty much get ten ho-hums, two of the hated LA Herbalifes Galaxy players, and one of the team-transplanted (formerly Quakes) Houston Dynamo players.


Interesting note on the back of the pack. Although I haven't realized it in the past five years, but Upper Deck has their legally required "No Purchase Necessary" chance entries automated and online. Of course, you'll only be notified if you successfully win your sweepstakes chance at an insert card.

However, it is a lot easier than following Topps' hokey-pokey snail mail rules for your random chance at an insert (although I suspect the hit rate from Topps is probably better). In any case it's probably worth going to the Upper Deck site to register, and then every couple months or so, submit your sweepstakes chances for every set and hope for Magic Mail a few months later.