Written by SumoMenkoMan at 5:00 AM
What the heck?  Like a train wreck, it is hard to divert your eyes.  These are Japanese cat cards from 1981.   Both Fuji and Billy have done write ups as well on similar cards.  The idea started in Japan in the early 1980s and is known as Nameneko (Licking Cat) which involved dressing up real-life cats in costume and posing them in certain situations.  Topps carried the copyright over to the States in 1983.  This is an original taba pack from Japan with 30 different card envelopes attached.  This particular set seems to be called (マスコット).  Typically taba packs are hung from the ceiling in candy shops with the envelopes being sold on an individual basis for a few yen.  You would pay and pull off an envelope from the pack.  If you happen to get a "winner" card, it entitled you to another pull or other prize the shop owner had available.  This taba pack still has its 30 individual envelopes.  Can I resist and pull only one envelope to see what cards are inside?  Grab a can of Asahi Super Dry and some Tylenol as this could be painful..... 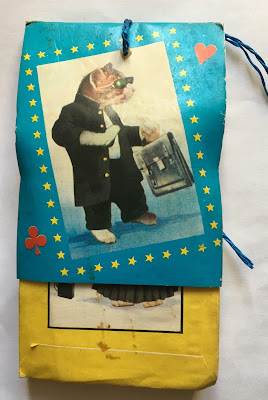 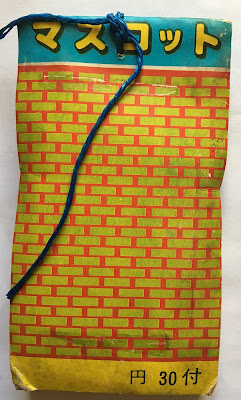 I think the left picture depicts a high school cat being too-cool-for-school.  It looks like the back of this taba pack had a sample card affixed, but someone stole it.  Dang cat burglars......  You can see the string that is used to hang the pack from the ceiling. 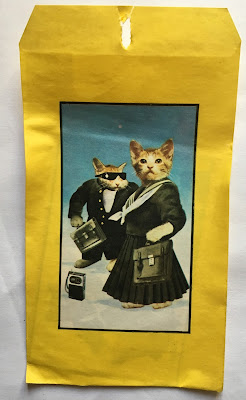 Here is one of the envelopes I pulled.  I couldn't resist and pulled three of them.   A cool cat along with his high school girlfriend? in her school-girl outfit.  Back in the 1980s, that skirt went down to the ankles....now they barely reach mid-thigh.  I love the sunglasses and Walkman-type radio. 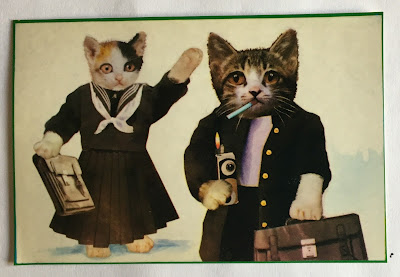 Oh boy, a great shot of the girlfriend? waving her boyfriend off to school.  Your eyes do not deceive you, that cat is getting ready to light up.  I doubt you will see that image in the 1983 Topps set.  I have to pull another envelope...>> '/\' << 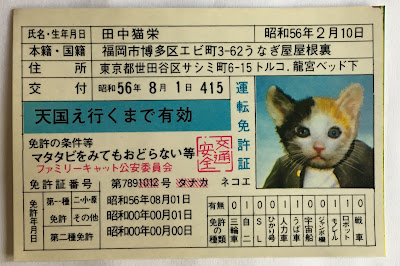 Here is the ID card of "Tanaka- the Family Cat".  Does your family know you are messing around with a chain-smoking tabby?  Alright, one more..... 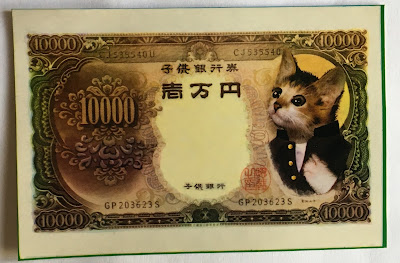 The Japanese equivalent of the "Benjamin"....making it rain! 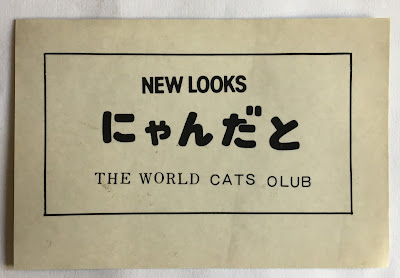 These cards are slightly smaller than a standard trading card and have a laminate covering.

Do I open some more???  I'll open an additional envelope for each reply to say thanks for stopping by. 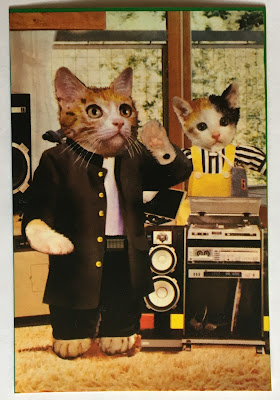 Angels, this one is for you.  Two cats getting down to some beats on their stereo system. 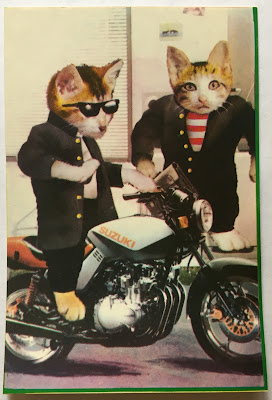 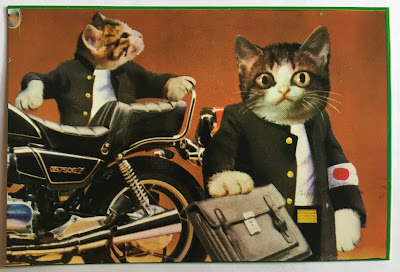 Billy, the creepiest (so far) card goes to you with those cat eyes.  Some additional motorcycle gang mischief going on here..... 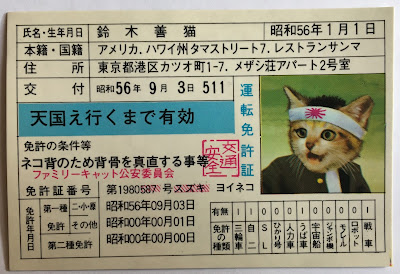 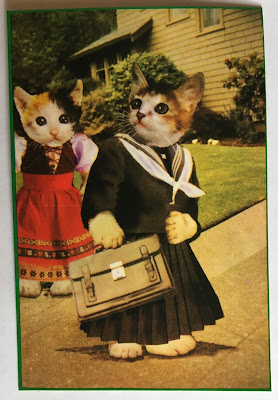 Tom, ask and you shall receive!  Crazyness....although these two cat heads look superimposed to me. 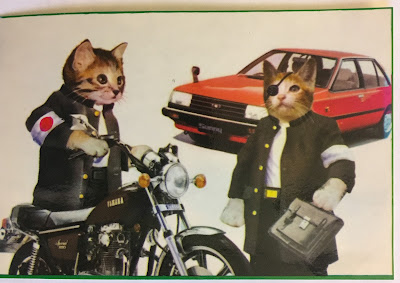 Fuji, a gift that keeps on giving (to quote you).  Some awesome early 1980s motorized tech in this photo.  I am no motorcycle expert, but that appears to be a Yamaha Special 850.

Awesome in their own weird way.

I wouldn't say I like these cards, but I am *intrigued* by them. Open another one for me!

This may be the best concept in the history of anything. I want to see more!

Hell yes. These are awesome.

Angels, Joe, Billy, Bru.....ask and you shall receive. Thanks for stopping by!

Oh, heck yes! I'll bite! Let's see another one!
For the record, my cats would never allow us to dress them up like that.

Tom, you betcha. Just opened up and envelope and posted one for you.

That's fantastic. Thank you!
I can't wait to show my wife this post. I can already hear her laughing. :)

They are pretty funny!

These are awesome! If this product doesn't make it into the APTBNL HOF, then the voting process is flawed.