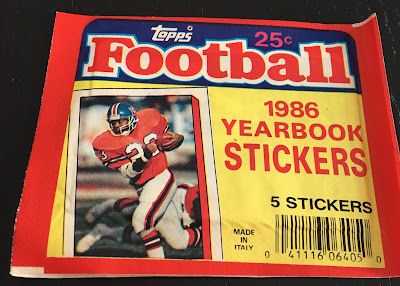 So this is my maiden voyage on posting to the legendary A Pack To Be Named Later, and it's an oldie but a goodie.

I busted a stack of 1986 Topps football yearbook sticker packs. The short of it, I bought the album last year in hopes of putting the stickers in the album with my daughter. Ambitious, given the stickers are 30 years old and not exactly being sold on the shelves of Target. But I built the album with my dad and maybe 30-40 trips to Hooks Drugs with my allowance money, so I wanted to relive the dream with my first-born who is in a sticker phase.

The album has pages for the then-28 teams in the NFL, a Topps All-Pro centerfold, Super Bowl Highlights featuring the 1985 Bears romp over New England, and a look at the NFL leaders on the back page. The sticker set has some of the big names like Walter Payton, Joe Montana, Dan Marino and (rookie) stickers of Steve Young, Bruce Smith, Reggie White, Bernie Kosar, Boomer Esiason and Andre Reed. One glaring omission from the sticker series was Jerry Rice, which salvaged these from being a couple hundred bucks.

So I pulled the trigger on a stack lot and here's what we got.

First, a look at the front and back of the album. 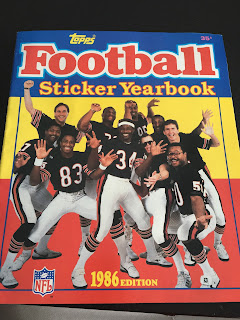 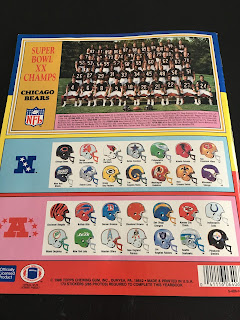 The packs themselves were all open, which is most likely a product of 31+ years of sitting around in poorly sealed packs, but whatever. The stickers came five to a pack, and it made it really easy to open. 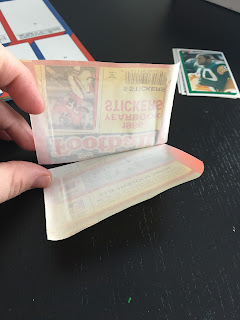 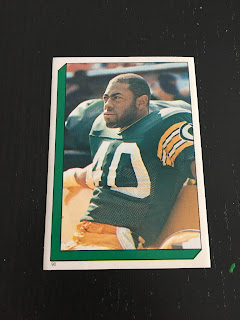 #90 - Eddie Lee Ivery - running back for the Packers. He was the feature back for the Pack back before the team adopted Brett Favre and made their run in the 90s. I would get several of these. Each team would get two featured stickers. 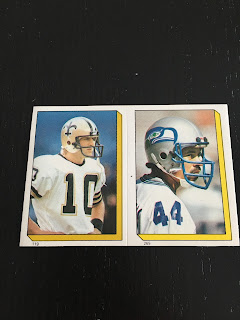 #119/269 - Brian Hansen and John Harris - this is where I began to notice the sequence of how the stickers would be assembled from a dual standpoint. Saints and Seahawks were paired, so if I was to complete the Saints page, I would be building the Seahawks at a similar rate. The sticker numbers are also set 150 numerals apart. It actually made the build a little easier. 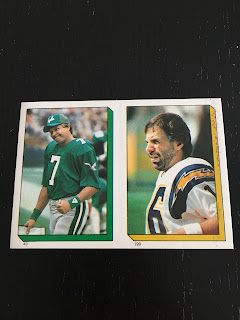 #49/199 - Ron Jaworski/Bob Thomas - another thing I noticed on these stickers is that the yearbook gives a lot of love to kickers and punters. Not the most flattering photo of Mr. Thomas, nor the best hand placement for Jaws, either. 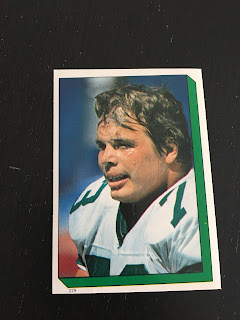 #229 - Joe Klecko - lineman for the Jets. He had a very, very good career for the J-E-T-S and was in his stride for this set. He has an All-Pro sticker in the middle of the book, as well. 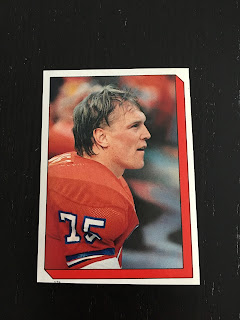 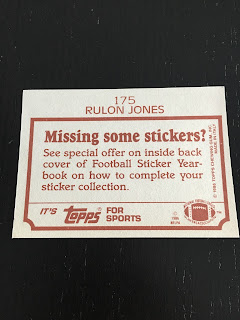 #175 - Rulon Jones - lineman for the Broncos. He was and is the only Rulon I have ever heard of, and I remember having his '86 Topps card and trying to figure out his first name. Rulon had a good run with the Broncos, a team I saw little of living in the Chicago market growing up. 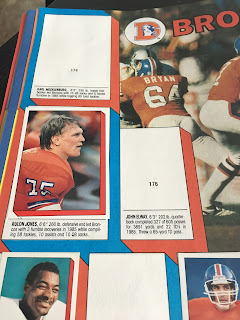 Here's a look at the Jones sticker in the album, with a couple others added to the page. Notice in 1986 John Elway wasn't considered a star enough to warrant a featured sticker. Warren Moon, Reggie White (as a rookie) and several of the Chicago Bears choices were also smaller stickers - the Fridge was given star billing over the likes of Mike Singletary, Jim McMahon and Richard Dent. 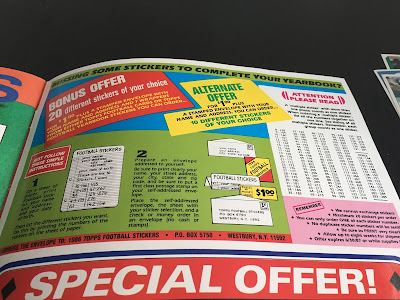 Along with all of the fun info and old graphics inside the album, there are these options back when times were much simpler and cards (and stickers) were much easier to acquire. Get a load of these offers. Especially this one on the bottom of the back inside cover. 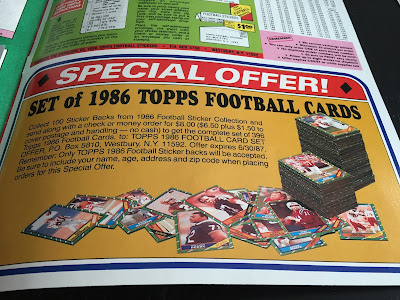 What a deal, even back then! To know now what we could have known back then, it would have been well worth it! Doing the quick math, you would have had to spend $5.00 on stickers back then, plus their $8.00 for the order. Anyone wanting to get a 1986 Topps set now for $13 (and getting the stickers to boot!) you'll get a set missing at least the Rice, Young, Montana, Marino, Elway, Payton, White, etc. etc. etc.

If anyone needs some stickers for this, I'm open to trade or sell. We have a good amount of extras as 1980s collation was evident in these packs. All told, we busted 100 packs and I am still short the Walter Payton, Louis Lipps, James Lofton, Billy Johnson, Kevin Mack, Lionel James, Carlos Carson, Howie Long, Ken Hill/Tony Collins, and John Turner/John Stallworth stickers.

You certainly picked a fun pack to feature in your inaugural post here!

This was great. I bought a box of the 1987 Topps Football stickers during my brief foray into football collecting, but I have really seen little of any of the other NFL sticker sets.

I have this stickerbook 100% complete. Any ideas if something like this is worth anything?