Written by SumoMenkoMan at 5:00 AM
I rescued this pack out of the 3/$1.00 bin at the local card shop...actually, you could probably say I put this pack out of its misery as it likely has been in that box for a good 10 years or so.  For $0.33 I am going to take a chance at scoring one of the autograph cards lurking within.  Given that this was the height of the overproduction era, there were probably several million of these packs produced so my odds are pretty low.  If they would have had Garth Brooks in this set, I would have cleaned the box out....but alas, it was not meant to be.  Here is the complete checklist at the Trading Card Database...annoyingly the cards are not numbered.....Grrrrr.  Grab your favorite drink and let's see what epic mullets lie within. 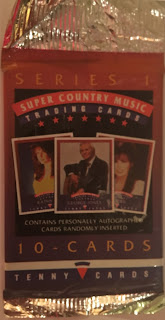 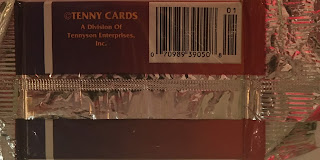 As you can see from these pictures, the pack was pretty beat up after being pushed aside for all those years.

Sorry for the crappy lighting.....your eyes are not deceiving you though, that is a strange eyeball-looking thing behind Neal on the wall.  Or maybe that is the glow of his beltbuckle in the studio lighting.  Joe sports an epic mullet and Mark has a sleeveless flannel...his jeans are riding a little high on his hips though.  Don't let his John Deere hat fool you, he has 3.75 years of college education. 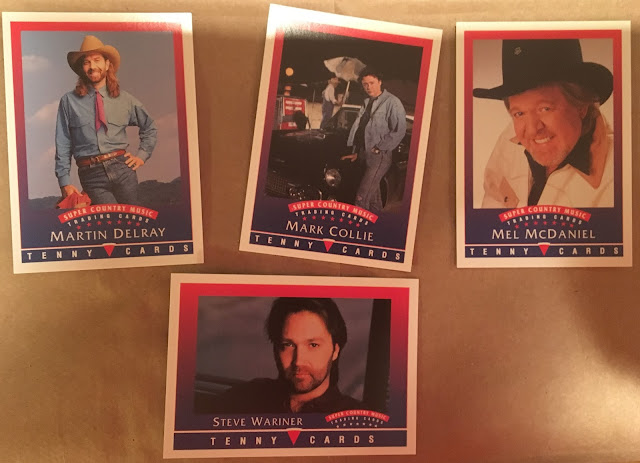 C'mon Martin, what is that ascot doing around your neck?  Actually, I heard ascots might be back in style....or were they ever out?  Lots of denim in this picture.  Creepy next-door neighbor Mel asking, "Whatcha doin'?"  Steve looks out of place in these cards....too cool for country. 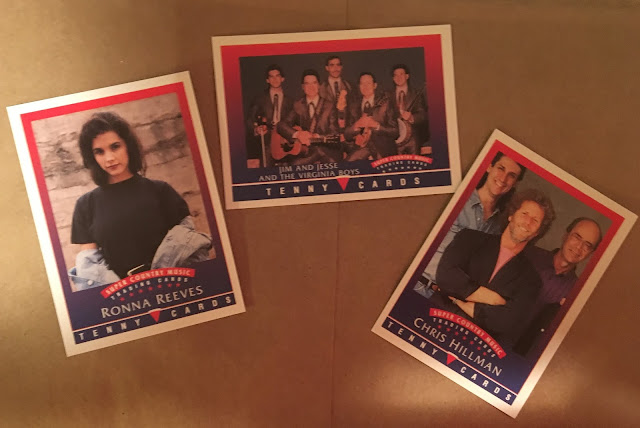 Using two conjunctions in a band name is interesting.  What do I know, though, they are Opry legends.  Ronna's denim jacket is struggling to escape back to the 1980s, but she is holding tight. 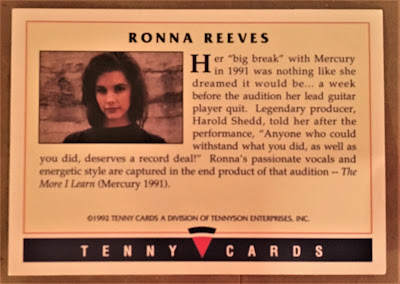 A photo of the back.  Good stuff!  Interestingly piece of trivia, Ronna came in second in the 1992 Top New Female Vocalist Award to Trisha Yearwood.  Sometimes its all about timing.

There you have it.  Not back for $0.33 and I hope it brings a little joy to your Monday.  Have a great week!

This is no joke, but I would be interested in the Neal McCoy card. I have seen him in concert several times. He is awesome!

Pretty cool! I actually listen to country music. I think that set has Brooks and Dunn in it, my favorite group. I have not found any of the set yet.

Shoot me your address at rakuda_chan@yahoo.com and I'll send it your way.

I jest, but I actually love country music. Sawyer Brown is pretty awesome! Brooks and Dunn were iconic when I was growing up...still are.

Had no clue these cards even existed. Thanks for sharing.

Very cool! I bought my friend a set of 1992 Country Gold for Christmas a few years ago. Had no idea these existed. I'll have to look into getting some of these for her next year.

I say that the Billy Ray Cyrus card was the hot pull from this set back in ‘92.

Maybe not a great pull but it was fun. I'd never seen these cards before but would definitely take a shot and finding some good ole mullet fun for that price. Thanks for the fun post.