Written by SumoMenkoMan at 5:00 AM
How this pack from Down Under made it to Colorado is a mystery to me, but I managed to salvage it out of the $1.00 bin at the local shop.  As you can see from the pictures, it is pretty beat up with a nice crease along the top-left pack corner affecting all the cards.  Futera is an Australian company and they seemed to have jumped on the early 1990s card craze with this second-year set of 1994 Futera Hot Surf cards.  I'm hoping to land a Kelly Slater second-year card, which would be pretty cool.  Here is the complete checklist on The Trading Card Database.  Grab your cold can of Fosters and let's rip curl this thing: 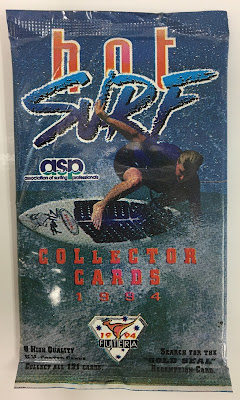 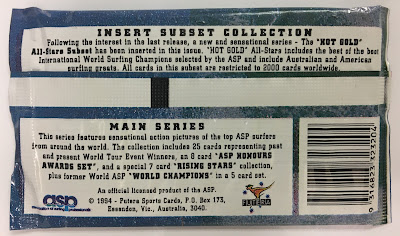 Just like the bronzed skin of the surfers, these cards are UV coated.  You can never have too much protection. 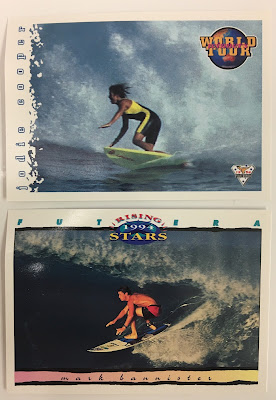 Starting off with some Aussies.  According to the back, some great athletes! 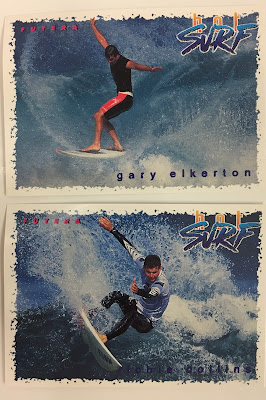 Gary pioneered the layback cutback and lives in France.  Are there killer waves there?  Richie is a naturalfooter (Here is an explanation)and makes his own surfboards.  Pretty cool! 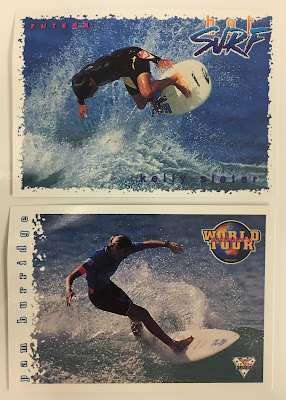 Bam!  Nailed a Kelly Slater card.  Did you know Kelly stared in Baywatch for 27 episodes as Jimmy Slade and hated it?  Pam Burridge is considered the queen of surfing! 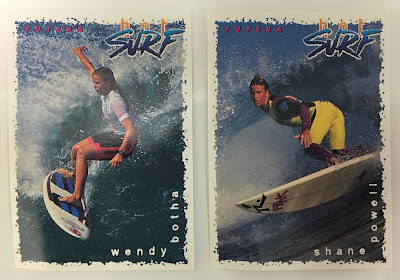 Some great action shots here of Wendy and Shane! 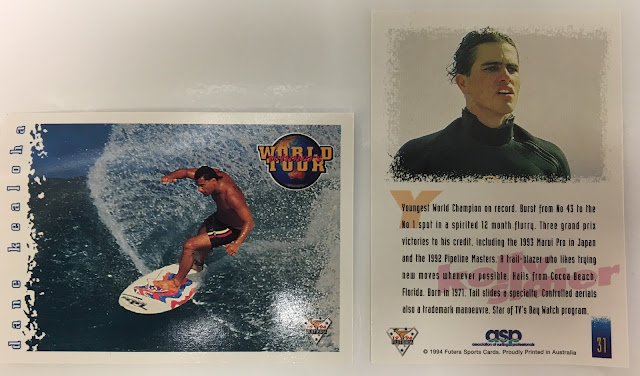 Bringing up the rear is Dane from Hawaii and the back of Kelly Slater's card.

Overall a great set and it is nice to see how cards of non-mainstream sports are manufactured.

Anyone have any great surfing stories?  Thanks for stopping by and I hope the second half of your week goes well.

That's a great pack! Love Kelly and Shane! Wish I could find some of these in a dollar bin. Heck, I'd love to find them in any bin.makes me remember my much younger days catching some of my earliest waves at Huntington Beach with my cousin.

Very cool product. Don't remember seeing these back in the day. I built a set called Beach Sports back in the early 90's that included surfers. Anyways... great names. I remember watching Wendy Botha and Gary Elkerton.

I never actually surfed myself, but I grew up going to Hawaii several times a year to hang out with my cousins and all of them surfed. By the time I was in middle school, I was subscribing to Surfer Magazine and keeping up with the top names in the sport. My favorites were Tom Curren, Derek Ho, Mark Occhilupo, and Mark Foo.

A few years ago, I started a surfing PC since Goodwin Champions started including a bunch of autographs. However I don't think I've added anything the past few years.

Back in 2014, Upper Deck hooked me up with a really cool Kelly Slater autograph for the collection:

Fuji, that is a really cool story and I enjoyed reading the two blogs about it. Who knew you were a surfer fan??!!