Written by SumoMenkoMan at 5:00 AM
Japan fascinates me....early 1980s Japan to be more precise.  In fact, I'd like to think that if I stumbled across a genie's bottle, I would transport myself back to that time and load up on a ton of mini cards, menko, video games, toys, and electronics.  You all could come over to my house when I got back and we'd drink mimosas in our Japanese yukata while we bask in the glow of the electronic buzz.  This era gave us Power Rangers, Transformers, Nintendo, Space Invaders....the list goes on.  In current reality, if I had more non-paid leisure time, I'd probably turn myself into a 1980s Japanese anime expert....sitting on the couch studying this art. 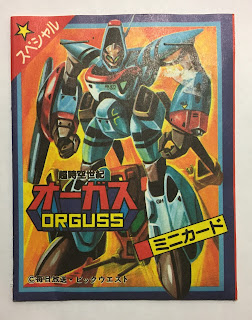 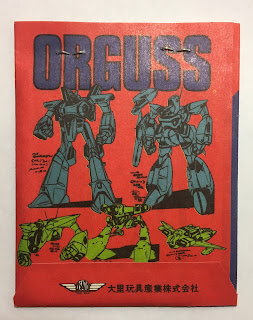 When I stumbled across this 1983 Osato Orguss Mini Card pack, I knew I had to open it for APTBNL.  I've heard of Orguss, but know nothing about it....until now.  You soon will too.  In a nutshell, Kei (the main good guy, and ladies man....he actually reminds me a lot of Capt Kirk in the new Star Trek movies) is trying to protect the space elevator on his home planet when the bad guys attack.  In the ensuing fight, a really big weapon explodes, ripping the fabric of time and sends Kei to the future.  He eventually builds what a lot of Japanese anime stars build, a sweet transforming robot/airplane/machine/tank called Orguss to fight the baddies of the future.  35 episodes later the series ends in a really kind of cool way....so I've read.  I won't spoil it...I've already read the spoilers myself so now need to go watch the entire 35 episodes.....dangit, there goes my leisure time.  This pack appears to have 2-3 cards in it and looks like its a fairly typical mini card pack of the era.  A few staples at the top and the word "Special" in the upper left corner along with all the cool Japanese artwork.  Hmm, I'm intrigued.  Grab your favorite bottle of sake, and let's rip this 35 year-old pack. 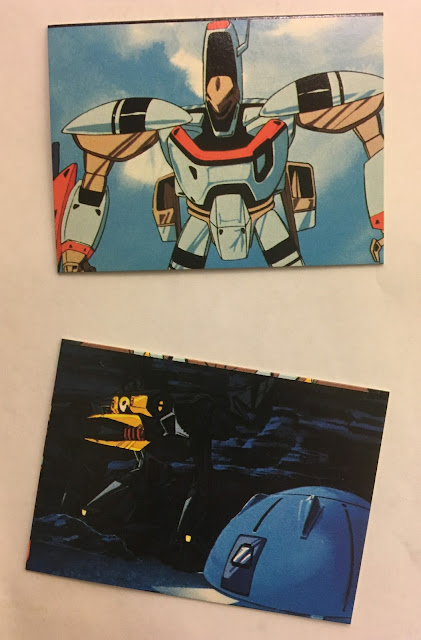 The cards are animation cells from the actual show.  You can see what Orguss looks like in the top card.  In what appears to be a deranged duck due to poor lighting on the bottom card, I think this is one of the bad guy mecha machines.  I choose Orguss in 3:1 odds. 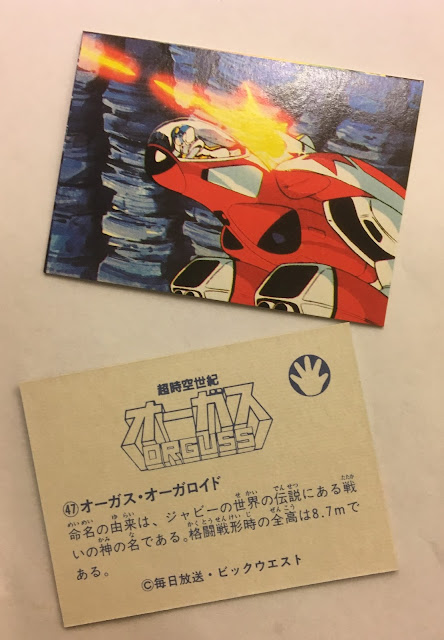 When you happen to have friends from the future, they typically come with benefits.  In this case, Maaie has a super awesome mecha machine called the Mobile Maaie.  Here is a better image, courtesy of tinami.com. 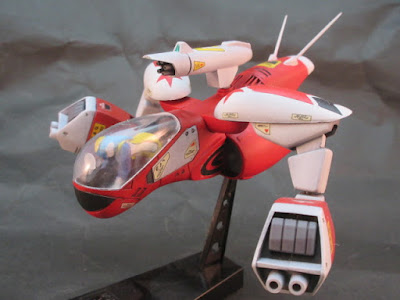 There you have it.  I hope your weekend is enjoyable and thanks for stopping by!

These remind armored warriors remind me of the Robotech cartoons I watched back in the 80's. Good times. Cool cards.