Written by Jeremy at 10:46 PM
I picked up a pack of these cards at the hobby shop tonight. I don't know much about these cards, but I like retro stuff and it looked like it might be fun to buy.

It advertises 8 cards per pack on the front. On the back it says that "...packs with a relic will contain 7 cards and Patch card will contain only 4 cards. Let's see how I do. 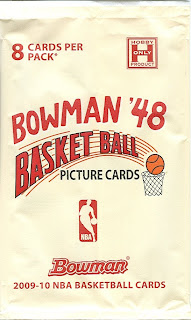 I really like the "Bowman '48" logo. It's like a "comic sans" or cartoonish type font and it really drew me in. I guess it's because of the red logo against a pale yellow pack that makes it really stand out. The fact that their is a generic retro basketball and net artwork instead of a player photo makes it more appealing to me.

I don't follow basketball that much, so I was just hoping to pull some players that I recognize or hopefully a Blake Griffin card.

My breakdown is as follows: 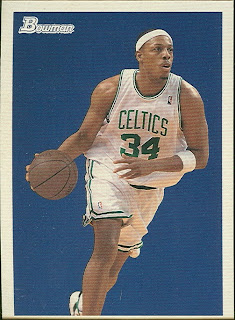 My first impression of the cards is that they look and feel like the Topps Magic football cards or the Target retro Topps baseball cards. They have an "arch" to them instead of being stiff. They're kind of slick on the front with rough backs to them.

#20 Carmelo Anthony. At least I know this guy. 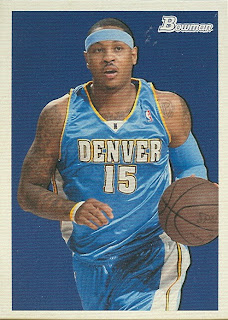 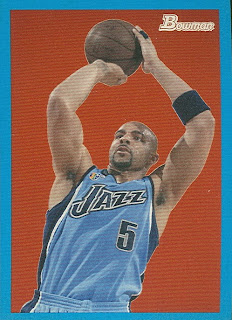 Here's the back of the Boozer card just to give you an idea of what the backs look like. 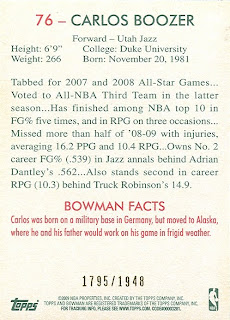 They don't have scratch off trivia questions like in Topps Magic, but they do have "Bowman Facts" about the player, which is nice because not all the facts are about basketball. 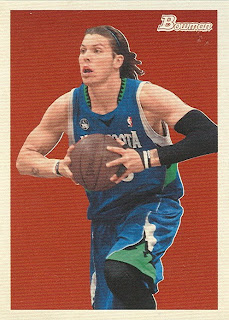 The cards remind me of Philadelphia Football a little too, except they don't have player or team names on the front. That's sort of the appeal of these cards to me. By not having that team or player identification and by having solid color backgrounds it really brings the focus to the players.

It looks like a nice product to try out and maybe pick up a few here or there.

I kinda like the look of it. I wish I had money to collect basketball.