Written by JediJeff at 4:38 PM
Spring training 2013 is in full swing. So, how about we take a look at a pack that is 25 years old? I wonder if it fits Night Owl's rule of vintage. I recently picked up a 10 pack repack at Target and pulled two of these beauties. This is the better of the two - take the phrase as you like. 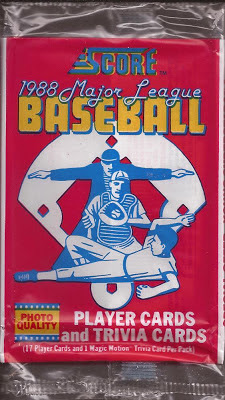 A pretty clear celo wrapper by Score. The cartoon on the front is cute. And hey - they are all "photo quality". Take that phrase as you like. We are in line for 17 cards and a magic motion card. Oh boy!! The best card in the set is a Tom Glavine rookie prospect card. I hope I get one!

For those that don't know much about '88 Score - all the cards had the same design, but the set had six different color borders. It was a 660 card set and well.....let's just show the colors, shall we?

Purple was first in the pack. All the cards are grouped in the pack by color. Top card in the pack was a Ryno. Not bad, except he is a Cub. So by 2x3 Heroes guidelines, he sucks. Rules is rules, folks. The Presley card is a nice shot of the ball in flight.

Next is blue. It seems like Esasky & Anderson were posed in the same position, eh? Love the slight sight of specs on Cooper.

Red is following blue in the pack. If you look at the first nine cards, we have a theme. Either you are hitting or you are fielding your position. These "photo quality" cards lack "photo variety".

Green. First view of a pitcher's card in the pack. If you wanted to put a bet that the pitchers would be photographed mid delivery, I would not have taken it. 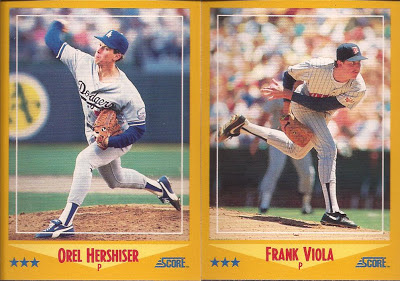 Yellow cards. If you remember the pack, we have 17 cards. So one of the borders colors in the pack would be shorted a card. Guess padding it out to 18 cards would have broken the bank at Score. Two nice pitchers in this pack with Orel and Viola.

The last border was orange. And holy crap - is that a fielder IN MOTION? Fire the guy who approved that image on the prospect card! 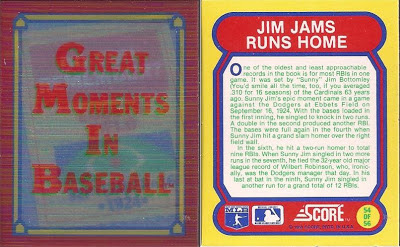 Here is the motion card I pulled. Scanned both sides for you. The card is referencing an event at Ebbets Field on 9/16/1924. And for the last scan, how about the card back? 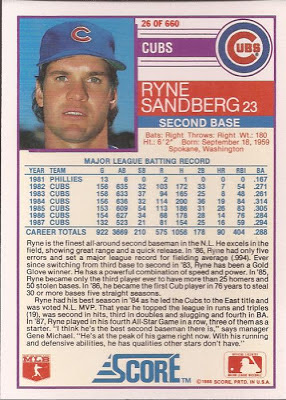 The border around the team name matches the color of the front. Lots of small print on the back of the card, so get your reading glasses. Junk wax at it's finest.

I know I'm in the minority... but I sort of like this set. I think the overall design is pretty boring, but I really enjoy the bright colored borders.

I also like the amount of information given on the card backs. They definitely utilized their space and even included a second photo & team logo.

I agree... this is junk wax at its finest. But then again... I love the junk wax era.

I like the bright colors and the backs. This is an underrated set.