Written by JediJeff at 5:04 PM
It's Star Wars Day!!! Is there a better day on the calender? I think not. I just realized the New Hope pack of this set has never been posted, so I will work on finding a pack somewhere. But The Empire Strikes Back set was just released this week. I picked up a few packs from my LCS the other day, and I can either post one now, or wait until December. 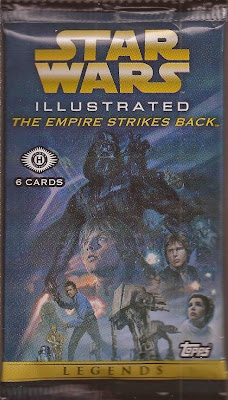 For those unaware, these cards are based on the NPR radio drama, not the movie (per se) or the comics. So there are scenes on cardboard that never made it to the screen. All the artwork is new and not reused from anything previous. Six cards in a pack, and you can find hits of sketch cards, autographs and film cells. 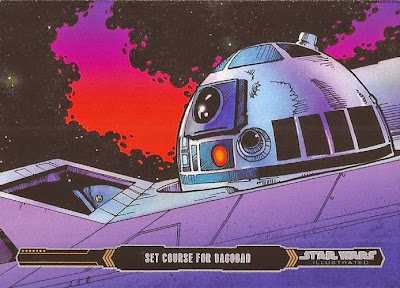 The artists take great liberty in the images in color and sometimes design. That is a very good thing. The layout focuses on the image. Very little to block the picture. Wish Topps avoided the foil, but there are purple and gold foil variations in the set. Anything for parallels, eh Topps? 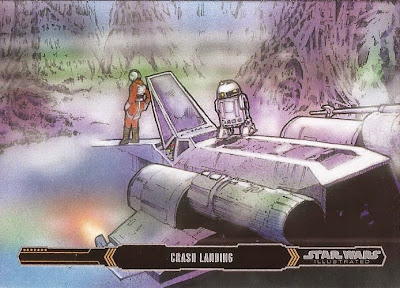 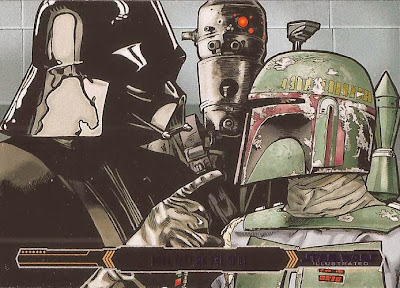 No - not a bad scan. This is a purple foil variation. You really need one of these in hand to see the wording. It's just that hard to read. "No disintegrations!" 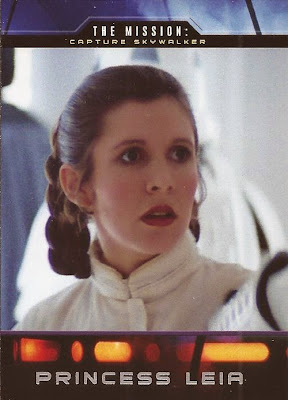 Besides the hits, there are three insert sets in the 100 card base set. One Sheet Reimagined takes the movie poster and has artists redesign it. One Year Earlier looks at 10 characters and where they were the previous year before the events of ESB. The Mission: Capture Skywalker is a 10 card set different that the Mission set in ANH  - Destroy the Death Star. In the 2013 release, there were codes you would enter from the 12 card insert set. Complete the set and you would earn a bonus Death Start card. Doesn't look like they are carrying that idea in the ESB release. 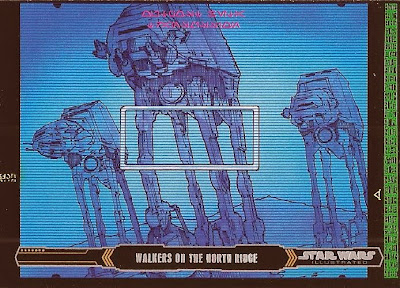 That is a killer card of a great scene. 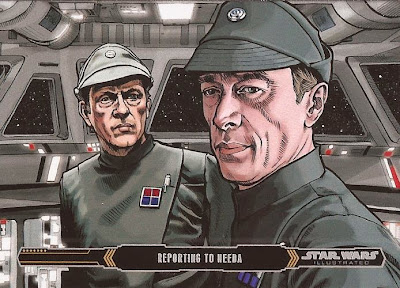 Final card of the pack. One of the characters drawn is about the have a very bad day. The other gets a promotion.

Well, no hit, but I love this set. Still a few short of the ANH set, but I just got a line on someone from my LCS that may have dupes. And I plan to buy a box of these, so I should have dupes of my own.

Love ESB! It's hard for me to justify busting a box of this stuff, but hopefully I'll find someone selling a complete set of these for a reasonable price on eBay or at the next card show I attend.