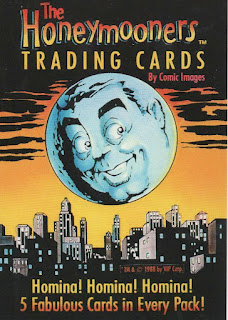 Welcome to a pack of 1988 Comic Images The Honeymooners. The cards come in a clear cello wrapper with no markings, so the top card serves as the pack's "wrapper graphic," I suppose. The cards are standard 2x3. there are 50 cards in the set.
Each card features a television motif border. The border is huge compared to the actual featured image. It is meant to represent a TV of the 50's and 60's, I imagine. The left 4/5 of the card has the featured image surrounded by what is supposed to look like the inset of a TV screen. The right 1/5 of the card has circles and a rectangle meant to evoke the appearance of old-school knobs and dials. I would guess many younger folks looking at the post have no idea why the border looks the way it does. The colors are done in a black and teal-ish motif. there is a thin wooden-grain border as well, further carrying on the television façade.
As mentioned, there is a featured image on each card. These are stills taken from the TV show and appear in black and white. Here we have a couple of stills from the show: 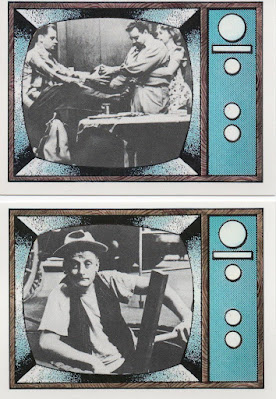 The next two cards show off a bit more of the action from the show: 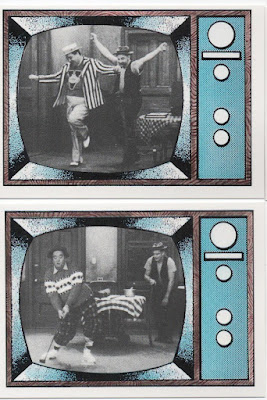 The backs of the cards feature a bus-inspired border. At the top, "2969" is shown as the bus number, which is the bus number featured in the show. The "destination plate" beneath the number shows the Honeymooners logo. Below that, the card has a trivia question. The answer to the question is printed upside down in the bumper. The bottom of the card features copyright and legal info. I have also included an insert card that's included which features an offer for a trivia book and also has the UPC code. 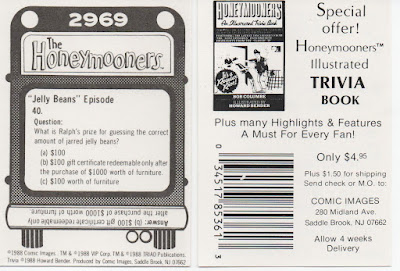 Here is a full checklist:

Email ThisBlogThis!Share to TwitterShare to FacebookShare to Pinterest
Labels: 1988 Comic Images The Honeymooners