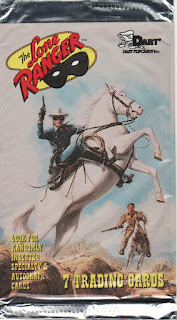 This is a pack of 1997 Dart FlipCards Lone Ranger cards. The cards are standard 2x3 and feature borderless images. The images are done as artwork prints and show comic book covers, movie posters, various scenes, and other depictions. The base set contains 72 cards. In addition to the base, there are die-cut cards, mail-in stand-up cards, and a limited run of autographed cards. There are various cards which were never released to the public as well, apparently. See link at bottom for details about the set.

As mentioned, these cards are borderless, allowing the image to take up the full front of the card. This one features the Lone Ranger taking down a (presumed) baddie: 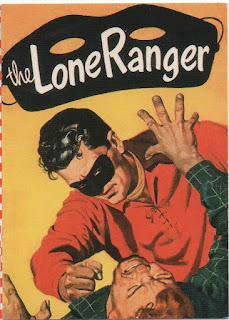 The nest two appear to be comic book covers (or inspired by such): 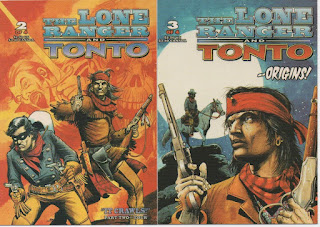 The next two are vastly different from each other! The left one looks as though the full sized image could be hanging as artwork. The second one is a crude drawing of something that looks as though it were once a coloring book page. 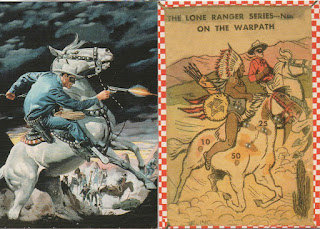 Perhaps the "comic book" page above is actually from the Paint Book referenced in the left image below. The "Hi-Yo Silver" card is freaking amazing! I love the red, black, and white contrasts. It is a poster from the 1940 film about The Lone Ranger's trusty horse: 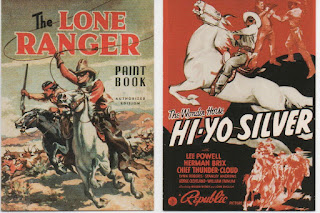 The backs of the cards feature the Lone Ranger logo/insignia in the upper left. The card number placed on a "black mask" icon appears in the upper right. The words "TRADING CARDS" in all caps sits centered at the top. Just below, the card title. Below that, text describing the image featured on the front. There is a rope border around the card as well as the yellow "Hi-Yo Silver" icon in the lower right. This icon appears on all the cards, not just the actual "Hi-Yo Silver!" card. 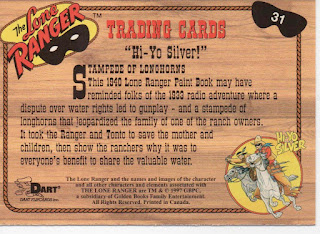 The checklist, along with inserts, unreleased items, etc: