Written by Jafronius at 3:10 AM
Greetings!
Hope everyone is doing well.  Madding over at Cards on Cards hosts a couple of yearly contests everyone should check out.  Both contests are based around college sports: one during Bowl season and one during March Madness.  I try to participate, although I have no real expectations to win, since college sports ain't my thing.
Anyway, I somehow wound up tying for the championship this past March Madness.  Instead of some sort of duel to the death scenario, Madding was gracious enough to award both of us with a blaster.  Due to my continued part time Target employment, I suggested that he e-mail me a Target gift card, which he did.  I told him my plan was to pick up a blaster later, most likely Topps Series 2. 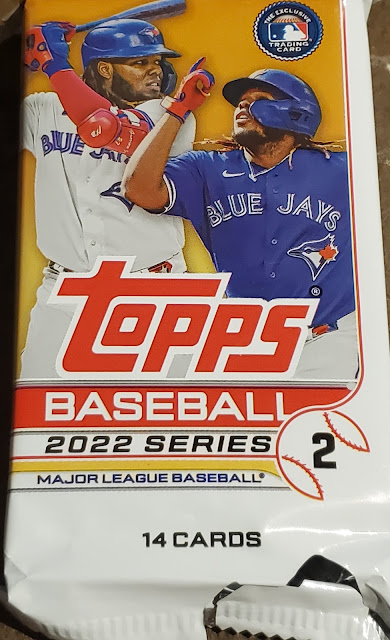 It took a bit, but I finally found a blaster of the stuff at Target.  I saw it on their online site, but it was $25 (thanks, inflation!) and I was hoping against hope that it would still be $20 in the stores.  I would have preferred a couple of fat packs, but I still haven't seen those in stores.
Anyway, the $25 blaster box comes with 7 packs containing 14 cards.  One of the packs comes with a Batting Helmet Commemorative Relic, making a total of 99 cards.  You can tell which pack has the relic; here is that pack: 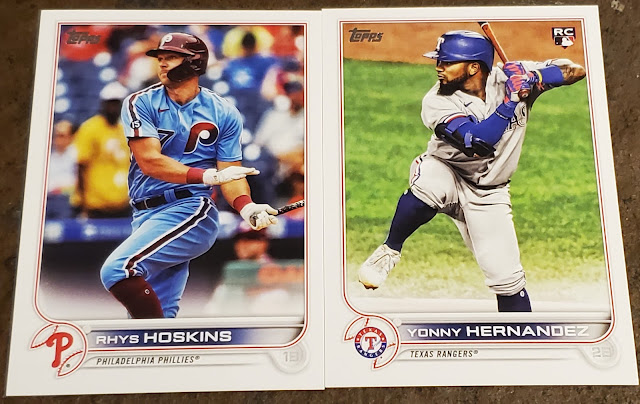 #523 - Rhys Hoskins
#363 - Yonny Hernandez (RC)
Nice start to the pack with the Rhys in the throwback uniform. 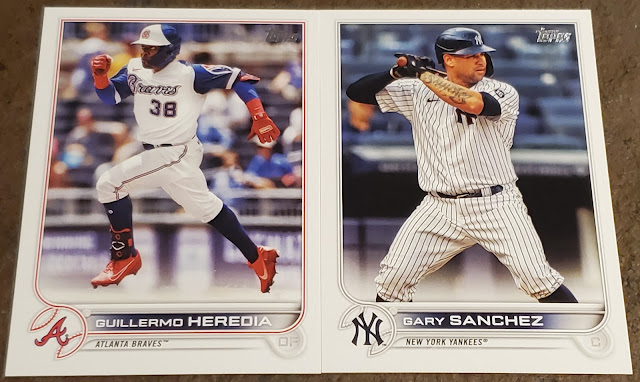 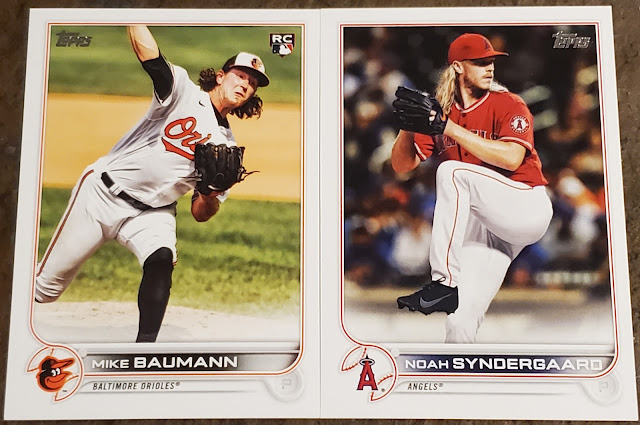 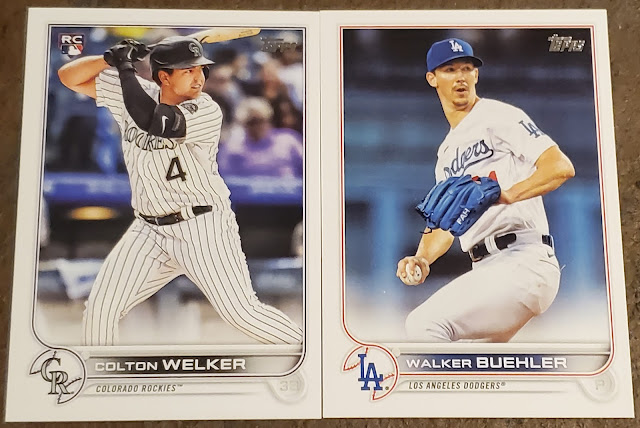 #480 - Colton Welker (RC)
#438 - Walker Buehler
Colton had only 37 at bats last year, enough to get him a card.  He was claimed off waivers a month ago by the Giants.  Maybe he'll get a Giants RC card in Update. 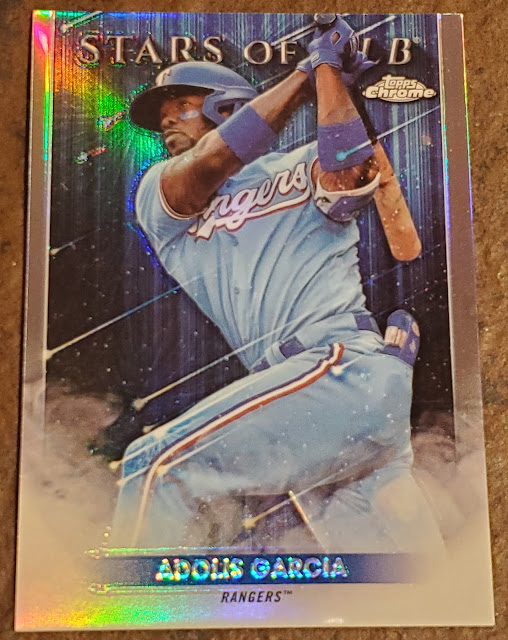 #SMLBC-57 - Adolis Garcia
The Chromey MLB Stars insert comes 1 in every 10 packs.  The fake Batting Helmet is next: 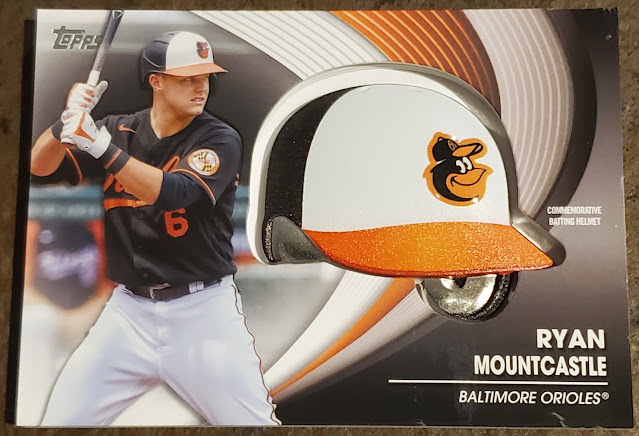 #BH-RM - Ryan Mountcastle
The "relic" is almost as thick as the other 14 cards in the pack.  The Helmets are only found in the Blasters. 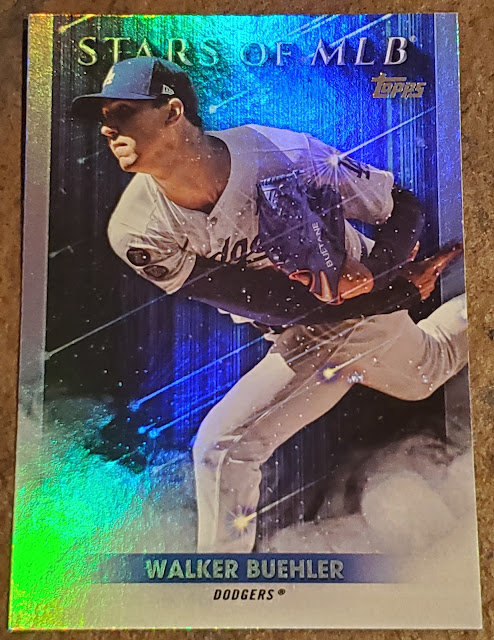 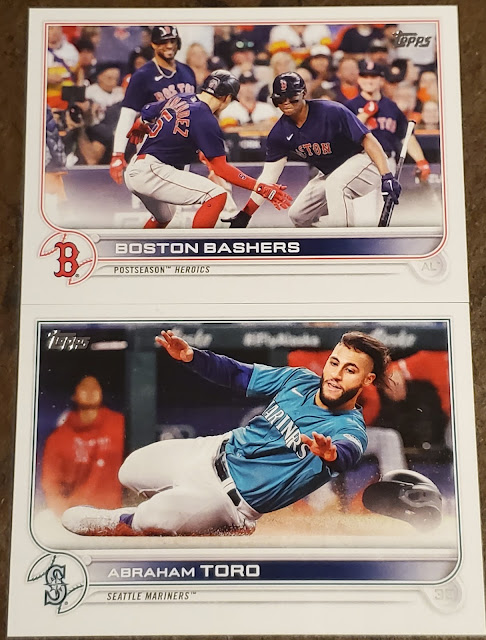 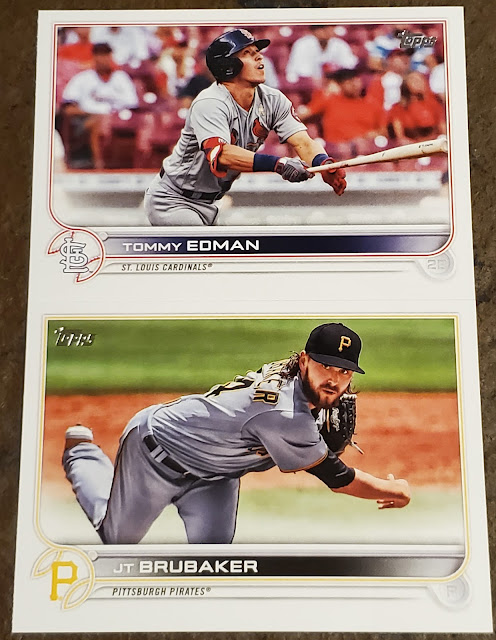 #419 - Tommy Edman
#556 - JT Brubaker
We finish the pack off with a couple of nice horizontal shots.
Here are some backs: 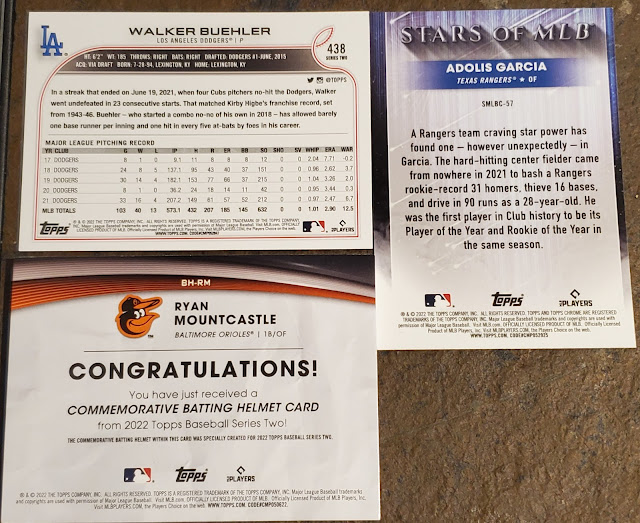 And that's the pack.  The Batting Helmet isn't worth the extra $5, and when this whole inflation thing calms down it's not like the prices are gonna go back to what they were.  Madding's wallet is gonna take a hit going down the line, unfortunately.  Thank you though for the contests and the opportunity to participate!
Have a good week everyone, and thanks for reading!

The helmet card is cool, and it looks to be a bit thick, is the helmet itself made of plastic???

The helmets are pretty cool. Nice change up for the manurelic.

I pulled an Ohtani helmet in the blaster I bought. Kinda interesting, but as usual with those things, I don't know what to do with it.

Im really enjoying the Stars of the MLB insert set this year...

Yes I believe it's a hard plastic. It certainly makes a harder sound compared to the rest of the card.

You get an employee discount? Think we got 10% off when I worked in retail.

I thought it was kind of silly that Topps raised the MSRP of the blasters for Series 2 considering that it's always less popular than Series 1.

Me too! Also, why raise it now, instead of the beginning of the year?