Hey there, it's Matt. No, not matt., or Matt F., or even Matthew R. Long time, no post! You might remember me from previous A Pack To Be Named Later installments like 1996 Pacific Pure NFL Gridiron. No? Well, I don't blame you, I wouldn't remember that junk either.

What brings be out of hibernation you ask? Spring Training! I'm more excited about baseball right now than I have been for a long time. My Phillies had a disappointing season last year, and I'm eager to see if their veteran core can put together one more good run.

So I'm here today posting up a pack of 1998 Bowman Series 1, out of a sealed hobby box that I picked up online for $24 shipped. Why this set? Well, because of the emotional leader of that aforementioned veteran core. You see, this set features the Bowman Rookie Card of none other than Mr. James Calvin Rollins. Here's the first pack out of the box: 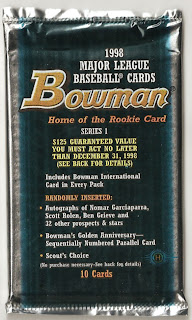 Ooo...shiny. Shiny and very, very boring. That's a lot of relatively small print jammed in there. The key details: 10 cards per pack, one International parallel per pack, and some other assorted inserts and parallels lurking around. Let's open her up. 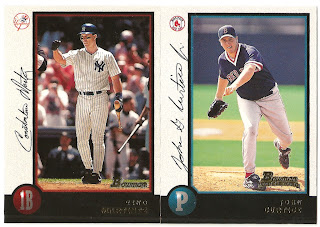 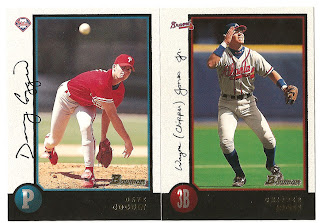 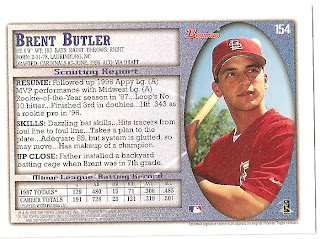 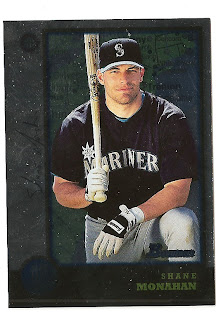 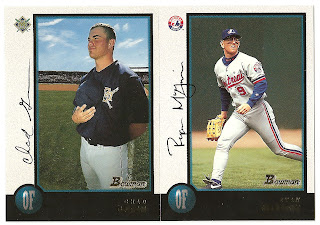 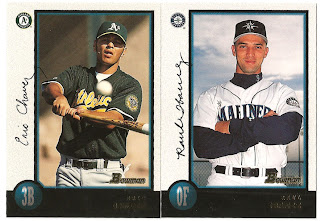 -Chipper is having a hard time there battling the sun.

- I actually really, really like the International parallels. If it isn't apparent what's going on here, the background map shows where the player hails from. Additionally, the text on the card back is in the player's native language. Mr. Monahan, here, is from Syosset, NY and expectedly, the back of the card is in English.

- The Montreal Expos. Remember when they were a thing???

This was an okay pack. The Chipper lends it some star power. There is a Phillie in it, though I have no recollection of Dave Coggin whatsoever. Those late 90s-early 2000s Phillies teams were really, really bad. Raul closed out that pack, that's pretty darn cool. No J-Roll though, which was the ultimate goal.

Soooo...did I end up opening any Rollins rookies in the box?? Yeah, two actually. One in pack 8 and another in pack 15. The one in pack 8 was sitting right on top, staring back at me. I was pretty stoked. I also opened up an International parallel of Scott Rolen, which would have been pretty darn awesome back in 1998, with him coming off his RoY season and all. While Rolen's departure from Philly wasn't exactly amicable, I've come to respect his stirling contributions to some really, really bad Phillies clubs.

I also beat the long 1 per case odds and opened up a Golden Anniversary parallel numbered to 50 of some guy named Pablo Ortega, who never made it to the Majors, but is apparently still kicking around in the Mexican League.

Final note, as I just opened a box of this stuff to basically hunt down RCs of a single player, pretty much everything but the Phillies are up for grabs. If you're interested in any base, or want to know which parallels/inserts I opened, just let me know.

I think I'm interested in any of the Cardinals stuff that you pulled. I think.