Written by JediJeff at 6:34 PM
Before we get to the pack, I would like to let you, the reader, learn more about the procedures here at APTBNL. You enjoy reading about the packs, but just how does it work?

For starters, the headquarters of APTBNL bears an amazing resemblance to the US Supreme Court. From the dais to the wood paneling on to the walls, the room is impressive. When we meet, we all wear robes. The interesting issue is while there are 65 members, there are only 64 robes. Let's just say you don't want to be late. Especially if it's cold outside. We all sit down and review the market - what's new, what's relevant, what's interesting. Then we divvy up the packs amongst the writers.

Now, I was running late for the most recent meeting. So I phoned it in - literally. As is customary, lots were drawn on each pack. Since I was not there, they drew for me and I was told I received the short straw for this pack. The most amazing thing when drawing for this pack: the bylaws dictate complete silence during the draws. There was a lot of commotion and what sounded like snickering during the announcement, so I requested a second draw. Incredible luck how I drew the short straw twice in a row. Well, rules are rules.

So without further delay, let's treat this pack like the Band-Aid it is and rip it off quickly. To speed it up, I scanned both the front and back of each card and combined them. You'll thank me later. 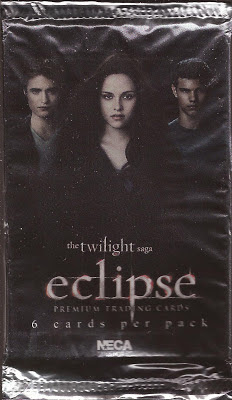 For you foil heads. The pack scanned like crap. Maybe because of the shinny vampire? 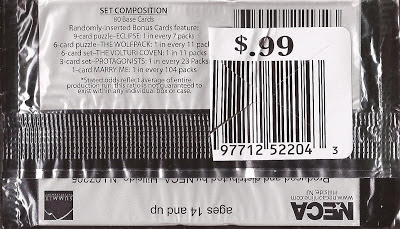 How about a rare look at the back? You see the insert sets available, but the ùber rare "Marry Me" - did we get one??? Fingers crossed. 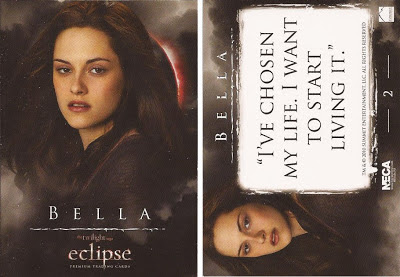 Profound quotes on the back of a few cards. Suck it, Mark Twain! Oh yeah, I pulled card one! Suck it, Bryce Harper! 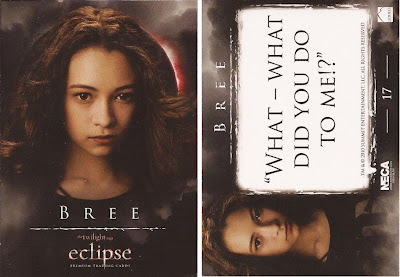 I have no clue who this character is. Suck it, up and coming minor league rookie! 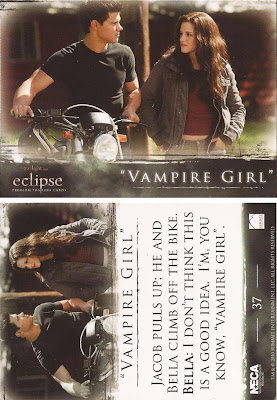 Six cards and 3 are horizontal. Suck it, Allen & Ginter horizontals! 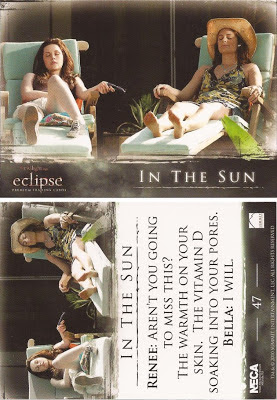 Twilight gets all sexy. Suck it, Kate Upton! 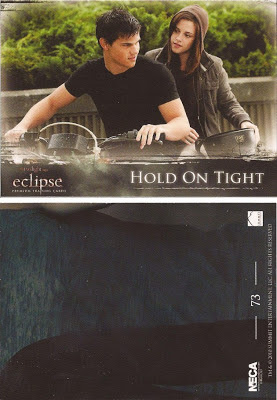 I pulled a puzzle piece card. Suck it, early '90 Donruss.

I guess the theme of this set is "suck".

Email ThisBlogThis!Share to TwitterShare to FacebookShare to Pinterest
Labels: The Twilight Saga: Eclipse

I can't believe this post got no love back in the. This movie was yuge! Just clowning as I did a post on a Twilight pack today and caught some grief. Fun post.