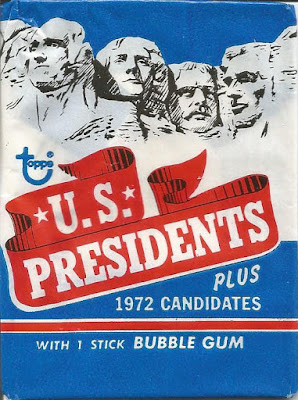 The 1972 Topps U.S. Presidents set contains 43 cards and 15 Campaign Posters. The cards are the size of standard baseball cards (2" x 3") while the posters are roughly 5" x 7" foldouts.

The fronts of the cards feature a President or a candidate for President. The presidential cards use imagery akin to Allen and Ginter - that is, they are paintings rather than actual photographs. The candidate cards, however, feature what appear to be stills taken from TV appearances. Below, we have Benjamin Harrison and Edmund Muskie: 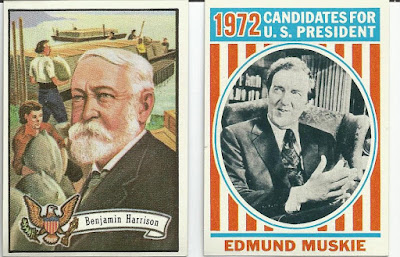 The backgrounds highlight a story told about each President on the back of the card. The fronts have white borders, the eagle emblem, and the name of the person featured in a ribbon across the lower third. Here we have Calvin Coolidge and JFK:

The backs of the cards are adorned in red, white, and blue. Okay, more of a 1970's gray, but the sentiment is there. The card number is displayed in a shield symbol on a blue background. To the right of that, the person's name, presidential number, and years of office. On the candidate cards, it simply lists them as a 1972 candidate. Fairly lengthy text fills the back, and tells one or more stories about the featured person. 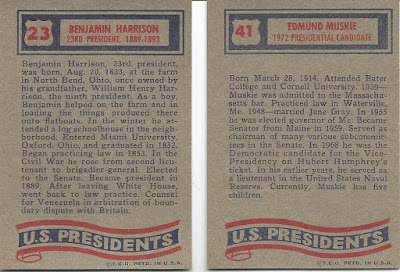 The bottom of the back has the "U.S. Presidents" logo along with copyright info:

I don't know if every pack has a poster in it or if that was a special "chase" thing in the day, but we pulled a poster of JFK! The fold-out poster features a flag-inspired border with the person's image in the center. Along the bottom, we see copyright info. The backs of these posters are blank. 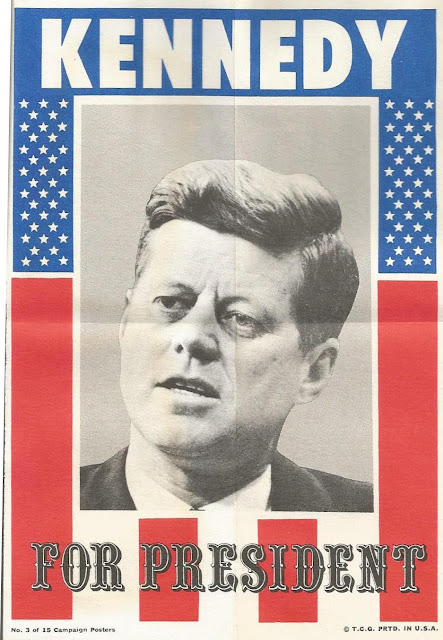 I believe these were an update/reproduction of an earlier set from the 1950's. Love the poster.

Yes, a modified reissue of a 1952 Bowman set. Are they standard size? I have not been able to hunt any down, but I do have about half the Bowman set! Weird that 50s cards are easier to find than 70s.

Never seen the poster before. That thing is pretty sweet!