Written by SumoMenkoMan at 10:47 AM
Now that the 2018 Winter Olympics are wrapped up, the greatest winter sport on Earth can now step out of the shadows and shine.  I'm talking the Iditarod Dog Sled Race.  While mushing has been around for hundreds of years, it wasn't until 1973 that the Iditarod became an official sport/race (thanks Wikipedia).  This year is Iditarod 46 where 67 racers will set off on the 1000-mile course to try and finish in front of the other 66 mushers.  By the time this is posted, there will a little more than 24 hours until the race starts.  Back in 1992, when everything was being printed on trading cards, MotorArt produced one of the several Iditarod sets that came out around this time.  The complete 1992 MotorArt checklist can be found on The Trading Card Database.  I know nothing about this sport, but I am willing to try anything.  Grab something warm to drink and a box of Girl Scout cookies.....it's time to heat this pack up. 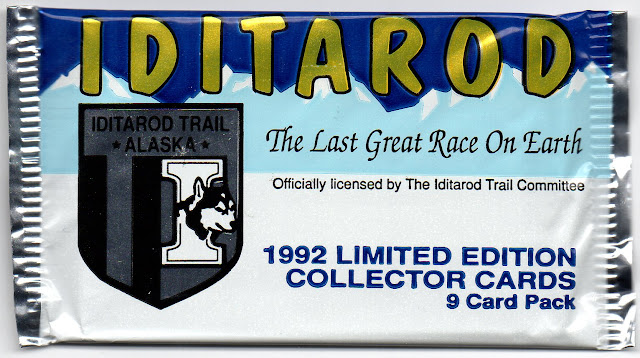 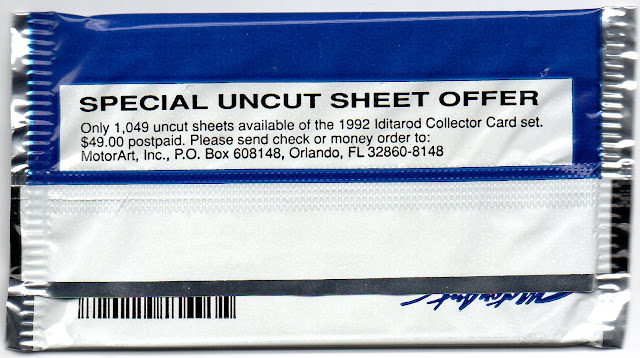 Dang, I wonder how many of these uncut sheets there are still left out there.  The 1049 is the official race distance...1049 miles.  How the heck did a Florida-based company win the contract to print these? 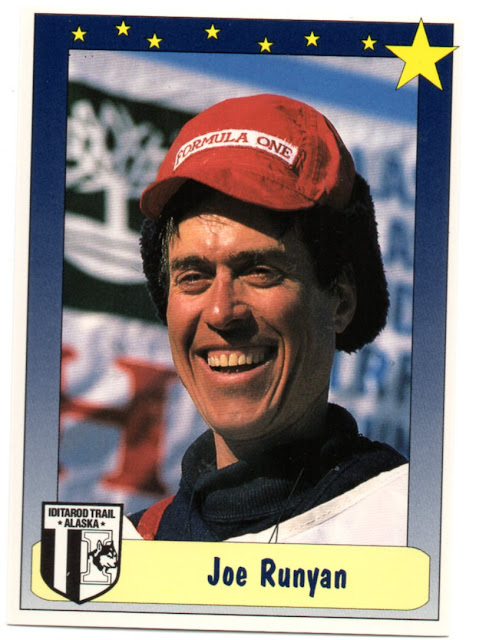 #7  Joe Runyan - Going strong at the beginning of the pack.  Joe is a one-time winner of this race back in 1989...although Joe looks like he should be a tire carrier for NASCAR. 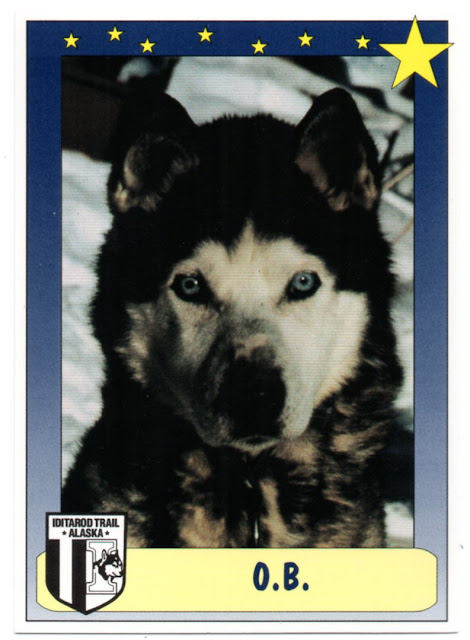 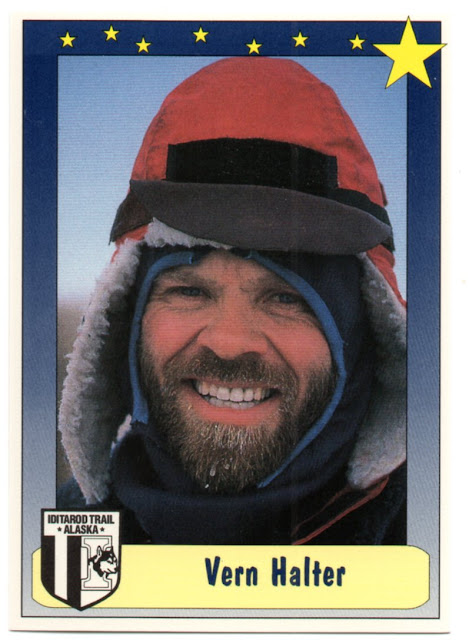 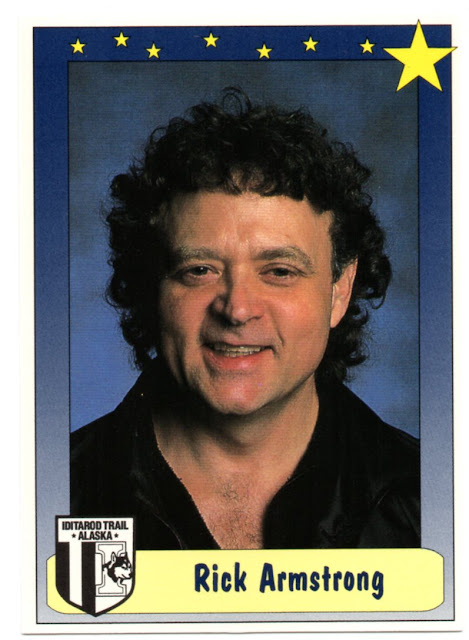 #104-Rick Armstrong:  This Ohio native now lives in Alaska...far away from hair-judging people. 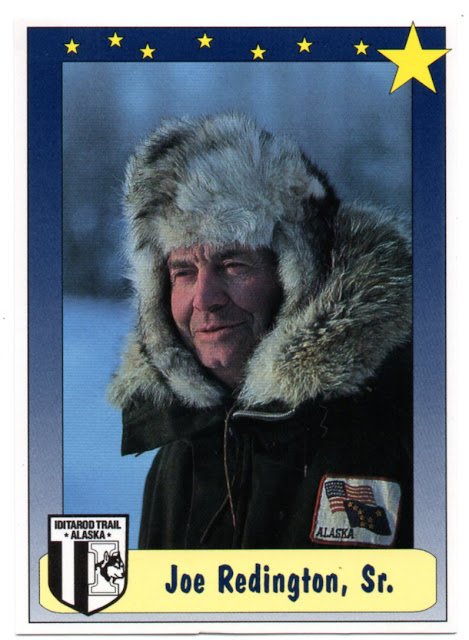 #109-Joe Redington, Sr.:  Coined "The Father of the Iditarod"...he definitely looks the part. 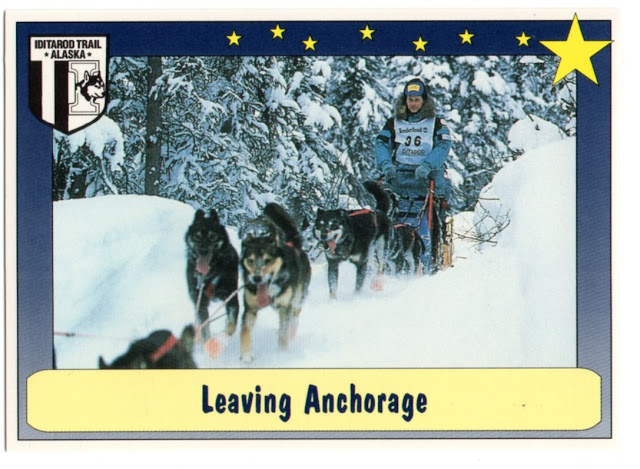 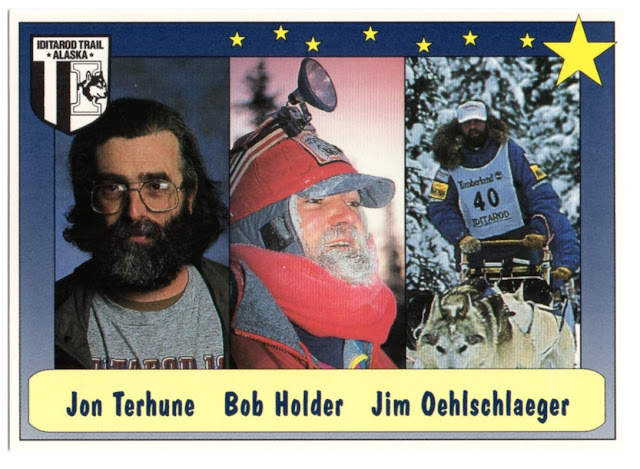 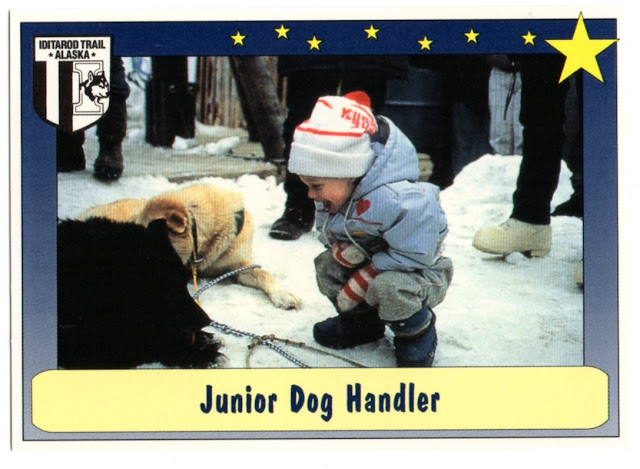 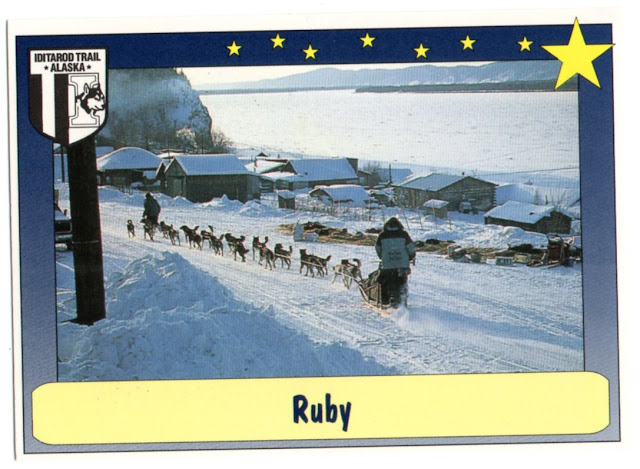 
Here is a sample of the backs: 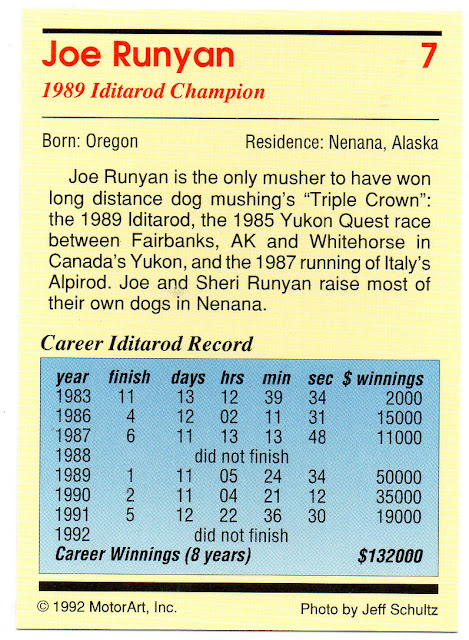 There you have it.  If I remember to check, I'll post the race winner here.

I actually did a story on the Iditarod in 1992, there was someone from our area who competed in the race!

I don't imagine he's in the set, he didn't finish very well.

Great break. I'll be downtown tomorrow tailgating the ceremonial start of the race. If you ever get a chance to come up to Alaska come in the Summer time it's much nicer, but the winter carnival Fur Rondy is a blast and so is the start of the Iditarod.

Night Owl, very cool. Given that they printed cards of mushers that came in #50, he might very well be in the set.

Buddha, that is so cool that you are there. I spend the better part of a summer in Fairbanks back in 1993. Are they selling any Iditarod memorabilia (eg trading cards) at the ceremony?

I believe that every sport deserves a card set...so I'm glad to see this! The shot of Ruby is pretty nice.

I haven't seen a new set in the 20 years I've been up here, but some of the mushers have their own cards they give out to kids. I was thinking a couple years ago a new trading card set would be nice especially with almost 50 years of history to put on cardboard. I think there is a set new than this one, but I think that dates back to the 90's as well.

I do know that Deedee Jonrowe hsa a card in the 2012 UD Goodwin Champions set. Deedee announced that this will be her last Iditarod and if you can find the card she loves to get fan mail.

If I could have a super power, I'd like the ability to know how many complete sets are out there of any trading card products ever produced. I'd especially love to use it on this set. I mean... how many people actually took the time to buy this product and make sets?

Don't get the wrong idea... I love this kind of oddball stuff. If I found a box at a reasonable price, I might actually buy one. But I gotta think that I'm in the minority.

Great stuff. No clue they existed. I love the card with the kid. Definitely a niche set but it cool to see these for the first time. Thanks.