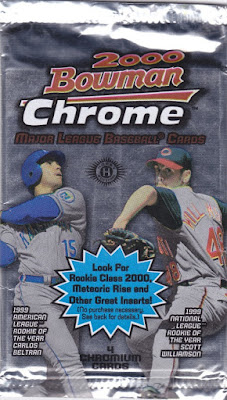 As part of a recent shopping spree of random loose packs at a card show, I picked up this 2000 Bowman Chrome hobby pack, featuring the recently retired (future Hall of Famer?) Carlos Beltran and, um, Scott Williamson. Not all Rookies of the Year are created equal. Just ask Pat Listach. 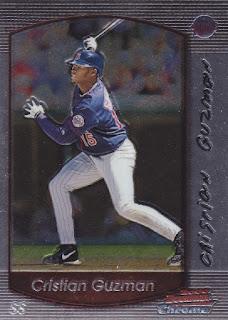 25 - Cristian Guzman - The last Bowman Chrome pack I posted here had zero major leaguers in it, so I was somewhat relieved to see a guy who was, while not quite a grisled MLB vet at the time, at least had an MLB stat line to his credit. 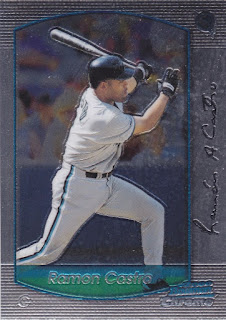 157 - Ramon Castro - Castro would go on to log 13 MLB seasons as a backup catcher. It's not a glamorous job, but there's something to be said for that kind of longevity. 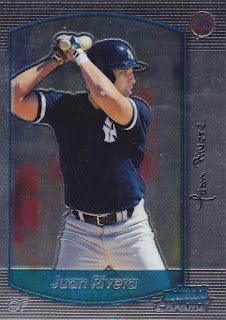 268 - Juan Rivera - Living in an era where cards of Yankees prospects still fetch considerable money, I wonder if people were putting dollars down on Juan Rivera at any point in his career. Rivera is another guy who had a lengthy career, the bulk of it coming with the Angels. 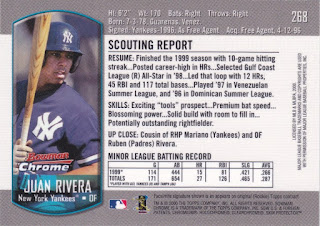 Here's the standard Bowman card back. 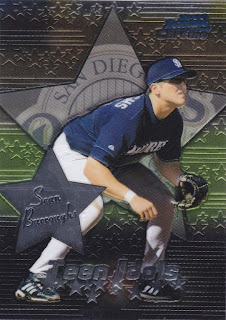 TI13 - Sean Burroughs Teen Idols - Burroughs was a Little League star when I was in high school. By the time I'd turned 25, he was playing games for my hometown AAA Portland Beavers (RIP) while I was sipping dollar beers at the stadium on Thirsty Thursdays. Burroughs didn't set the league on fire and was gone by 2006, only to randomly resurface five years later with a new franchise (Arizona). Baseball-Reference tells me that he's still playing independent league ball these days. Good for him.